Lab Manager Magazine’s 2012 Investment Confidence Survey, conducted in late Q4 2012, revealed a slight increase in optimism compared with the end-of-year 2011 survey. The good news is that on average survey takers were no more pessimistic than they were a year ago. 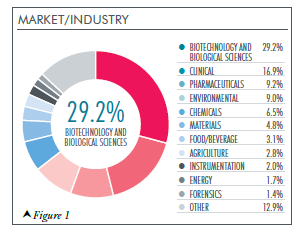 Four hundred and two laboratory personnel responded to the 2012 survey. Figure 1 shows the breakdown according to industry affiliation. 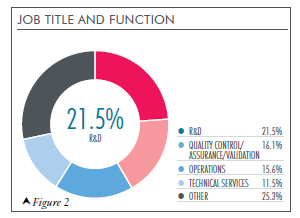 Sixty-three percent of respondents indicated a managerial or supervisory role, compared with scientific or engineering job titles at 23.4% and technician or “other” at 13.6%. Figure 2 illustrates the percentage of respondents falling into various technical disciplines. R&D, QC, operations, and technical services were by far the leading categories, comprising 74.7% of all respondents. 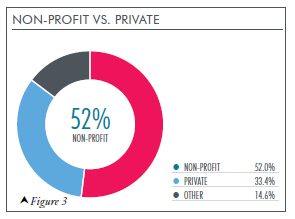 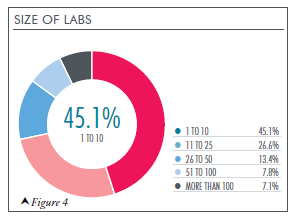 Small labs continue to dominate the landscape, with nearly half of all respondents working in organizations with 10 or fewer individuals. (Figure 4).

The 2012 survey demonstrated that optimism about general business conditions was similar to that in the 2011 end-of-year survey. When asked “How would you assess present general business conditions (Q4 2012) in your lab compared to a year ago (Q4 2011)?” 32% of those surveyed indicated that their labs were better off than at the end of 2011, which was identical to the tally from 2011. Similarly, those assessing the business climate as “worse off ” amounted to 21% of respondents in both years. Slightly more respondents (42% in 2011 versus 39% in 2012) believed the situation was essentially the same. It is perhaps significant that the 2010–2011 period was viewed by many respondents as the beginning of economic recovery, at least for laboratory operations.

2012 respondents were generally more optimistic about the future than those surveyed a year earlier.

When asked “One year from now (Q4 2013), how do you think general business conditions in your lab will be?” 40% anticipated improvements, compared with just 35% the prior year. Interestingly, the “worse off ” responses were slightly higher as well, 16% in 2012 versus 15% the year before. The slack was taken up by those who anticipated conditions would remain more or less the same: 34% in 2012 versus 42% in 2011. Some respondents indicated that the economic recovery was progressing more slowly than originally anticipated, hence the pessimism. While no data exists on this, there is good reason to believe that the rosier outlook was predicated on more robust business performance the previous year.

As expected, scores hovered near values of 3 to 5—the modal response—for most questions. Responses of 1 or 7 were generally less than 10% of all answers. Some interesting patterns evolved, however, suggesting a skewing toward more positive or negative outlooks for some factors.For example, responses to “organizational commitment to investment” were skewed toward favorable views. The most common response for this question was above average (5 out of 7), and the mean response was 4.3. By contrast, respondents were significantly less optimistic about their companies having or expending sufficient funds for technology acquisition. While responses 4 and 5 were approximately equal in number, the lower-confidence responses predominated. This was reflected in the average response for this question, 3.7, which is below the average response of 4. A similar lower-confidence pattern was observed for responses to the questions on company finances and adequacy of staffing.

2012 responses reflected somewhat greater confidence overall than 2011 survey results. In 2011, confidence was lowest in organizations’ ability to staff projects adequately, where those with low confidence (responses 1 or 2) outnumbered highly confident responders (6 or 7) by two-thirds, and the average confidence assessment was 3.7, below average. For 2012 the value was 3.94, reflecting somewhat higher expectations and confidence.

By contrast, in last year’s survey the highest average response, 4.02 (the only value above 4.0), was for funding for workspace, environment, and expansion. Confidence in this measure slipped somewhat in the 2012 survey, to an average response of 3.91. Confidence in firms’ commitment to acquiring new technology and instrumentation also fell slightly, from an average confidence value of 3.96—essentially “average”— in 2011 to 3.7 in 2012.

Perhaps the most telling reflection of business confidence was measured by the question “Compared to 2011, how has the 2012 research budget changed for each of the following areas in your lab?” Respondents were asked about the following expense areas, which are grouped below in order of necessity for maintaining existing capabilities and taking on new work. Scores ranged from 1 (decreased significantly) to 7 (increased significantly).

The “essentials” include materials, equipment, and expenses required to keep a lab running. It is not surprising, then, that respondents estimated that budgets for these items remained relatively unchanged from the previous year. Responses for these three items showed a remarkably normal distribution, with 4 being the most frequent score. As with the 2011 survey, responses were skewed slightly positively—in favor of increased spending.

Variable priority items include items and services in which companies flush with business more or less automatically invest. Well-trained workers and new instrumentation can significantly improve the quality and quantity of work—if business dictates.

On that basis, responses in these expense categories were cause for minor celebration. Estimates of investment in new technology were up for 2012. Last year, perhaps still feeling the pangs of the economic downturn, respondents felt that investment in analytical equipment, particularly new and pre-owned technology and laboratory automation, was significantly lower than in the previous year. This was reflected by an average response of 3.6. This trend is evidently reversing. Laboratories seem to be resuming their acquisition of “technology,” as the average response for 2012 was 4.0. Prospects for training, however, appeared flat.

Interestingly, survey takers believed that their companies placed less emphasis on new projects during 2012 compared with 2011. The average score for this item was a belowaverage 3.7. It is possible that respondents were confused about the meaning of “new research projects” and thought of these as elective in-house projects instead of attempts to acquire new work.

Unfortunately, the slightly improved optimism did not carry through to capitalintensive expenses. These continued where they left off from the 2011 survey—in the doldrums. Construction, renovation, and lab setup were particularly hard hit, with approximately three times as many respondents in 2011 estimating that investment in facility and infrastructure was significantly lower than the previous year’s. For 2012 the “decrease” versus “increase” ratio was a more manageable 2—an improvement but a definite sign that labs are not eager to renovate or acquire new facilities.

Individual lab workers, even managers, may not know their company’s finances in great detail, but they are extremely sensitive to compensation and staffing levels—normally seen as surrogates for an organization’s financial health. On this front the bad news continues from the previous survey. In 2011, the number of respondents estimating that staffing and compensation had risen from the previous year was only one-third of those who reported down figures. The trend continued in the 2012 survey. For example, just six responses indicated “increased significantly” for compensation and benefits versus 45 listing “decreased significantly.” Similarly, just 17 of 390 individuals stated that their firms hired additional staff, while 63 indicated that staffing had fallen.

The impression from budget-related responses is that laboratories’ finances have forced them into a conservative posture with respect to capital-intensive commitments such as facilities, instrumentation, and human resources. Business goes on as usual: Labs continue to stock essential equipment and consumables, but the business climate prevents them from investing in future growth.

We have thus far discussed 2012 from the perspective of 2011. How do laboratory managers and workers see the future unfolding? The final survey question, “In the coming year (2013), how do you think your lab’s 2012 research budget for each of the following areas will change?” provides some insights.

As in the previous question, those surveyed were asked for opinions on high-priority, elective, and capital expenditures. Not surprisingly, respondents predicted that outlays for essential equipment/materials and support for existing projects would remain the same or increase slightly during the coming year.

Moving on to the variable priority items, respondents estimated that outlays for training in 2013 would remain essentially at 2012 levels. Anticipated expenditures on “new technology” were slightly down from 2012 estimates, 3.9 versus 4.0, but estimates for spending on new projects were slightly higher, 3.8 versus 3.7. The differences are not statistically significant. In other words, respondents do not anticipate meaningful increases or decreases in spending on variable priority items for the coming year.

The outlook remains cloudy, however, for high-cost items. Facility-related expenses are expected to fall in 2013 (average response = 3.6). As with perceptions of 2012 versus 2011, twice as many respondents were pessimistic as were optimistic. Surprisingly, optimism about the biotechnology industry did not differ from the overall average for questions related to facility construction. For the 44 individuals who answered this question, the average response—3.6—is exactly the same as that of the general survey population. Several counter factors are at work here. The primary factors positively affecting construction of new facilities are the tremendous growth in revenues and approved products, the entry of small biotech companies waiting for their big commercial break, and the emerging biosimilars business. On the negative side, the industry, particularly in biopharmaceuticals, is becoming much more efficient in its production methods. Today’s plants require five- to 10-fold less production capacity than the same physical product volume would have demanded 10 years ago

That being said, respondents in biotechnology were slightly more pessimistic than the consensus about expenses related to lab innovation: just under 3.5 compared with 3.6. This difference is probably not statistically significant, but neither number is encouraging.

The all-industry results do not look promising for hiring-related expenses. Pessimists (responses of 1 or 2) outnumbered optimists (6 or 7) by a factor of three. This was nearly matched by the pessimism/ optimism ratio for employee compensation, 2.7. Perceptions for 2013 with respect to technology acquisition deteriorated compared with the 2012 outlook, however. In the most recent survey, those predicting lower spending outnumbered optimists by only about 50%, but overall optimism scores were somewhat lower compared with 2012 (3.8 versus 4.0).

On the question of lab automation, respondents from every industry sector predicted significantly lower outlays for 2013. Automation is viewed as a luxury for most labs, even though the return on investment has time and again been demonstrated to be short and the benefits extend long term. The consensus average, a tad below 3.4, indicates lower interest in robotics and other automation tools. Surprisingly, respondents in clinical labs, where automation is an absolute necessity, came in exactly at 3.4.

Laboratories represent an incredibly broad range of competencies and activities. Despite this, perceptions by managers are remarkably consistent across industries. The 2012 survey clearly indicates consensus on this point: Labs will continue to purchase what they need to maintain current workloads, but managers are waiting until business improves before investing in capital-intensive improvements such as automation, redesign, staffing, and new facilities. Indeed, volunteered comments accompanying the survey results suggest that labs are making do with what they have. While pessimists outnumbered optimists by factors of two or three, not all was doom and gloom. The percentage of optimists was approximately the same as in 2011, which was much improved over the previous year. Survival is not a dirty word in a world recovering from catastrophic financial shenanigans, and toward that end treading water is not such a terrible strategy.

Angelo DePalma is a freelance writer living in Newton, NJ. You can reach him at angelo@adepalma.com.