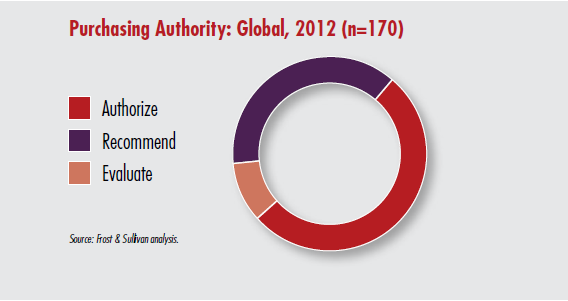 With the “fiscal cliff ” looming—the possibility that substantial portions of the U.S. federal budget will be trimmed in 2013— laboratories that depend on government money are anticipating sharply constrained budgets. Other labs may also be affected due to the negative impact that lower federal spending and higher taxes would have on the overall economy. Thus, instead of the once-typical growth of 3% to 5%, overall growth of just 1.2% is anticipated for 2013, after 1.0% growth in 2012.

This conclusion is based on a survey of 170 laboratory workers with knowledge of their lab’s budget. Survey participants include lab managers, directors, group and project leaders, scientists, technicians, principal investigators, researchers, and graduate and postdoctoral students. They represent academic, biopharmaceutical, industrial, patient care, and government labs. Most respondents work in North America, although the survey was open to respondents anywhere in the world.

The demographics of survey participants are graphed below. Slightly more than half authorize purchases, others recommend or evaluate purchases. Most—86%—indicate substantial familiarity with their lab’s budget, while 14% indicate that they are “somewhat familiar” with it. 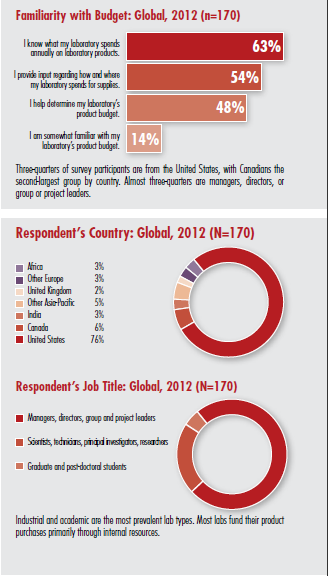 Readers are cautioned that the 2013 relative to 2012 biopharmaceutical and government results are based on small numbers of observations. A small number of ‘Other’ lab types is not shown.
Source: Frost & Sullivan analysis

To indicate the relative sizes of these market segments, the following table presents 2012 estimated average budgets. Budgets of academic laboratories are seen to be relatively small, while patient care labs have the largest budgets on average. Instruments, chemicals, and general laboratory supplies are the largest product categories, followed closely by life science reagents and kits. The relatively large average budget for the latter category is significant, since 46% of respondents indicate that their labs do not use life science reagents and kits at all (have not purchased and do not expect to purchase in the 2011- 2013 period). The next-highest value for this statistic is 19% for glassware. This suggests that labs that do purchase life science reagents and kits spend substantial sums on them.

Readers are cautioned that the biopharmaceutical and government results are based on small numbers of observations. A small number of ‘Other’ lab types is not shown.
Source: Frost & Sullivan analysis

Budget cuts at the level proposed by the Sequestration Act would have a tremendous impact on academic and government labs. With sequestration, these labs’ budgets could decline by as much as 10%. Cuts to the National Institutes of Health alone would result in 2,300 fewer awarded grants, which would bring grant applicant success rates to an all-time low. Nonetheless, respondents from both academic and government labs expect their product budgets to increase in 2013. The 43 respondents from academic labs anticipate that their 2013 product budgets will grow by 3.1%; more than that reported by any other lab type. Academic labs’ average anticipated budget growth rates for 2013 relative to 2012 showed an increase across all product types. All other lab types reported a decline in at least two product categories. Moreover, academic labs expect to see the greatest increase in spending—6.4%—on instruments, which are generally the most costly lab expense. Predicting an increase of 0.1%, the 12 respondents from government labs do not expect growth in their 2013 product budget to be nearly as robust as respondents from academic labs do. Even so, the fact that government labs plan to spend slightly more than they did in 2012 is encouraging given the generally bleak outlook for federal funding. While government labs conducting mandated work—such asenvironmental testing—are likely to be insulated from any budget cuts, government labs performing basic research could be hit hard.

With a 1.1% increase, the 62 respondents from industrial labs expect their 2013 product budgets to be slightly higher than those anticipated by biopharmaceutical labs. Industrial labs cover a broad range of applications, from chemical and petrochemical to food and beverage. Accordingly, product budgets vary considerably depending on the particular industry segment. In aggregate, though, industrial lab product budget growth rates generally parallel overall economic growth. According to U.S. Federal Reserve officials, 2013 gross domestic product growth is likely to be between 2.5% and 3%. Estimates for 2014 are from 3% to 3.8%, which bodes well for industrial labs.

Service and repair of instruments and equipment

Labs have a number of options for the service and repair of their instruments and equipment. For both product types, manufacturer contracts and in-house service (by a service department or by the lab itself) are widely used. However, in revenue terms, manufacturer contracts predominate, indicating that in-house service is cost-effective when feasible. The survey results on these points are graphed below. 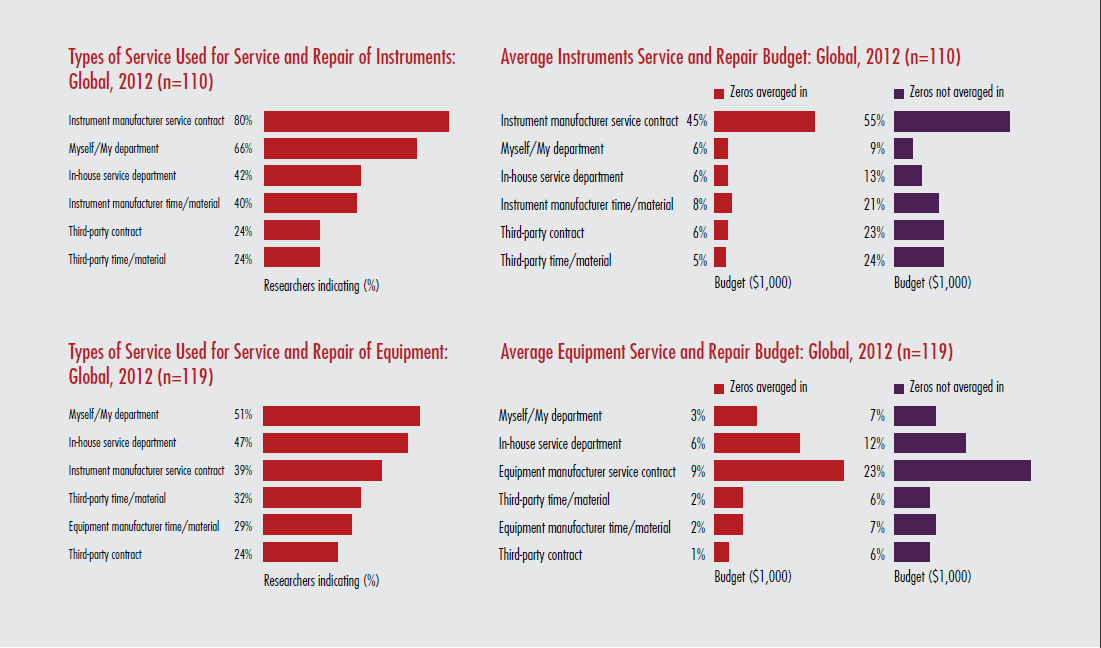 After the economic collapse of 2008, labs experienced constrained budgets in 2009. Some budget support was provided in 2010 by economic stimulus spending, but in general austerity has continued through 2012. Survey participants are pessimistic about 2013, in good part because federal fiscal policy may become restrictive at a time that the economy still needs stimulus. The fiscal cliff that may hit in 2013 if Congress does not act would both cut federal spending and raise income taxes—a double whammy for the economy.

The total budget growth of 1.2% anticipated for 2013 is weak, particularly considering that this growth follows several years of austerity. Coming out of a trough, growth should be much stronger—perhaps at the upper end of the historical 3% to 5% range.

Demand for consumables is projected to hold up better than demand for other products:

Plasticware has been replacing glassware for many years.This trend appears to be continuing:
• Glassware -0.1%
• Plasticware 0.6%

These results make intuitive sense. It is easier to defer acquisition of instruments and equipment than of consumables, which are continuously used up in lab operations. Instruments and equipment, on the other hand, can continue to be used even if their technology is out of date. Glassware and plasticware may be consumable or reusable— in times of tight budgets, the incentive is to treat them as reusable as a cost-saving measure. This would be reflected in relatively weak demand for glass and plastic labware. While many respondents cite tight budgets and rising costs as negative factors affecting their labs, some positive factors also are cited. These include demand-generating factors such as emerging markets, green initiatives, increased emphasis on quality, legislative and regulatory issues, and an aging population.