As in our previous Salary & Employee Satisfaction surveys, the results this year continue to reinforce the idea that laboratory professionals are for the most part happy in their careers and derive meaning and satisfaction from the work they do. However, there were a few surprises this year with regard to career growth opportunities. But before we get to those details, let’s find out more about the participants in this year’s survey.

The majority of this year’s survey respondents—73%— work in either industrial, clinical, or academic research facilities, with the balance employed by government, private, or contract labs. [Table 1] The largest groups of respondents are lab managers (47%) and researchers/technologists (35%), with a smaller number in academia and corporate and project management. [Table 2] Across all organizations, the primary fields of research are chemistry and biology, with the balance involved in environmental, clinical, and drug discovery work. [Table 3] 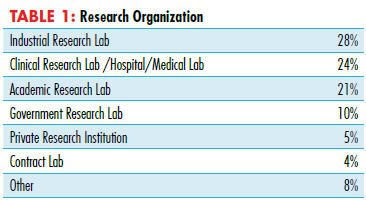 What we have seen consistently since we began these surveys in 2007 is that longevity is the hallmark of the scientific research profession, with 48% of this year’s respondents saying they have been working in the lab for more than 20 years. Compared with 42% in 2009 and 44% in 2010, there seems to be a

steady increase in the over-20-year crowd and a similar decrease at the other end. This year only 1% of

respondents told us they have worked in a lab for one to two years, compared with 5% in 2009. This indicates fewer new hires and aligns with the age distribution typically found within labs. [See pie chart] One percent of this year’s respondents are under 25, which is the same percentage reported in 2010. However, 29% are older than 55, compared with 25% in 2010, indicating that the baby boomer bulge remains alive and well in today’s lab. In addition to longevity, loyalty to research institutions remains constant, with 22% of respondents telling us they have worked for their current employer for more than 20 years, a 6% increase over 2010.

This year we learned that 3% more respondents now had managerial responsibilities than did in 2010. And of those managers, 44% managed lab professionals only, while 35% managed both lab and non-lab employees. Exactly half of this year’s respondents told us that the number of employees they managed was between one and four, while 38% said they managed between five and 24, and only 12% said they were responsible for staffs larger than 25.

Show Me the Money

Compared with 2010, there has been very little change in compensation. Those making less than $25,000 a year dropped from 11% in 2010 to this year’s 5%, suggesting fewer new hires and more movement up the pay scale. Top to bottom, this year’s results indicate compensation stability along with some modest increases. However, when it comes to bonus programs, 8% fewer respondents were participating—36% compared with 44% in 2010.

While 22% of this year’s respondents said there had been significant changes to their benefits within the past year, that percentage was not any greater than what we’ve seen over the past two years. And when asked to explain, there were as many positive as negative comments regarding those changes. “Better health insurance,” “Economy improved and bonus was higher,” “Employee health insurance premiums have gone up and coverage has gone down,” and “No merit or cost-of-living salary increases.”

However, when asked specifically about their current employer-provided benefits, respondents identified modest improvements in the majority of offerings. Notable was a 10% increase in 401(k) matching programs. Other improvements included upticks in health, dental, vision, and long-term care insurance as well as in tuition reimbursement and contributions to pension or retirement accounts separate from 401(k)s.

One surprising and fairly dramatic response this year compared with 2010 was to the question of whether respondents would still be working at the same company with the same position within the next 12 months. Two years ago 41% said they agreed/strongly agreed; this year that number increased 33 points to 75%. This seems to indicate that two years ago lab professionals were less certain about their futures within their organizations—still feeling the aftershocks of the 2008 financial crisis perhaps. But this year’s data suggests that while jobs might be more secure, the opportunity for growth or promotion has decreased. This same possibility is also indicated by answers to the question of whether respondents would be working at the same company with a job promotion within the next 12 months, to which 12% fewer agreed/strongly agreed and nearly 17% more disagreed/strongly disagreed. But despite what appears to be fewer growth opportunities within their organizations, nearly 12% fewer respondents said they would be leaving their current positions within the next 12 months than did in 2010. Different question, but the same answer when 25% more respondents this year disagreed with the statement “Within the next 12 months I will be working somewhere else in the same profession.”

There was almost no change this year in respondents’ answers to questions concerning job training and career development. In fact, when asked whether they felt their experience and skills were adequate for their current positions, 93% answered in the affirmative, the exact same percentage as in 2010.

However, somewhat notable were

responses to the statement, “This organization provides training or experiences to help me exploreother opportunities within the company,” to which 10% fewer said they agreed/ strongly agreed than did in 2010. This reinforces the earlier suggestion that there are fewer career growth opportunities in today’s research facilities.

Despite that, this year’s survey paints a picture of general stability within the scientific research community, with no dramatic changes in compensation, benefits, or job satisfaction. That labs remain populated with more middle-aged and older employees remains a constant and something we will continue to pay attention to, begging the question of who will replace the baby boomers when they finally hit retirement age. Stay tuned.

If you participated in this year’s Salary & Employee Satisfaction Survey, thank you. We look forward to returning to this important topic a year from now and will be counting on your participation.