Is it Time for a New Ultralow Freezer?

“As long as it’s working, you don’t really worry about it; it’s not going to tip you off to anything particular that’s about to fail,” says Buckner Richerson, vice president of international sales at NuAire (Plymouth, MN). “You unfortunately just get hit in the nose one morning when you come in and see that it’s failed during the night.”

However, he says that oil logging, which could be caused by a variety of problems, is one sign that a freezer may be on its way out and users will notice it when the freezer begins warming up.

“Oil logging occurs when there are restrictions within the capillary tubing and the cascade system breaks down,” Richerson says. “As the freezer warms up, that clogging melts so it starts to work again for a while and then it clogs up again. It could be because the unit has been operating out of spec.”

Uwe Ross, president of BINDER (Bohemia, NY) adds that when the compressor begins to fail, it is usually a good time to consider upgrading.

Ross adds there are two major considerations behind a new ultralow purchase: 1) Budget/cost and 2) Is the user’s current unit still up to the task of modern cold storage? He believes the second point is the most important factor.

Of course, if your unit still meets your needs and is running fine, there is no point in upgrading, the two add.

“As long as a freezer’s operational and it’s pulling down to -85C efficiently after door openings and it reaches all the way to -85C, the setpoint, then things are fine,” Richerson says, adding that failures that are electrical-based and don’t involve the refrigeration system itself also wouldn’t require buying a new freezer, as these are inexpensive fixes.

A good quality freezer should last about ten years, and the latest units offer benefits such as lower noise levels, greater efficiency, and electronic data loggers to replace old paper charts. And for users who need to monitor access to the freezer and critical samples there are a number of security features available.

Ross says even the simple improvement of being able keep a new, quiet freezer in your lab, rather than an old freezer banished to a hall or basement because it is too loud, is crucial.

“Having the unit in the same room gives you a whole bunch of opportunities or advantages the greatest being that you can control who has access to your unit,” he says. “You see how it’s behaving (compressor on/compressor off) so you have a much closer eye on it.”

However, Richerson adds that if a user doesn’t need all the latest features, they can get a very good basic freezer for around $9,000. “You don’t skimp on the refrigeration system itself, they should all be the same—but you really only need a remote alarm contact feature and battery backup alarm system,” he says. “That’s it for a basic freezer.”

Save time while protecting sample integrity 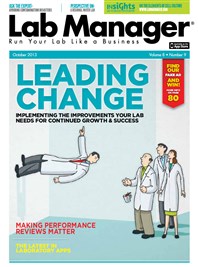 Implementing the improvements your lab needs for continued growth and success

Done right, the dreaded annual performance review can become a meaningful management tool
The best mobile lab apps have ties to instrumentation and are freely downloadable