There are many different signs that it’s time to upgrade your fume hood, but vendors say safety is the number one reason. “The minute you realize that your fume hood isn’t keeping you safe is when you should change it,” says Erlab president Stéphane Hauville. “When you’re doing your annual safety check on it and you’re realizing it fails to pass a filtration efficiency test, yet the filters are in good condition, then there’s something wrong with the hood.”

He adds many fume hoods aren’t getting tested as often as they should—at least once a year to ensure they are functioning properly.

According to Luke Savage, LEED Green Associate and sales engineer for ducted hoods at Labconco, customers should be careful to make sure the problem is caused by the fume hood itself before going ahead with an upgrade. 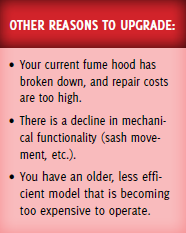 Degradation of materials is another sign that a ducted or ductless fume hood should be replaced. This includes a physical discoloration of the materials, such as etching of steel, fogging on the glass barrier or window, or loud noises coming from the internal fan of the ductless or, in some cases, ducted unit, adds Brian D. Garrett, LEED Green Associate and product specialist for Class II BSCs and carbon-filtered enclosures at Labconco.

There are also many benefits to having the newest technology, including higher efficiency, better containment of a larger number and variety of chemicals, and a higher safety level. 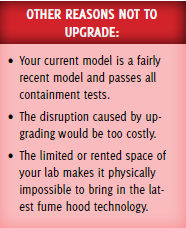 “Just like an automobile, they keep getting safer,” Hauville says of the latest hoods. “There is nothing a newer product with newer technology won’t do better than an older product.”

Savage adds that greater efficiency can lead to a payback of two years in a ducted hood (in terms of costs).

“In a lot of cases, by simply changing the fume hood and making either modifications or replacements to the mechanical system that supports that fume hood, we see a payback for upgrading to a new modern fume hood within a couple of years,” he says.

The cons of upgrading are similar to integrating any new equipment into the lab: disruptions caused by installing the new system, the time lost due to the need to become familiar with the new hood, and the up-front costs of the system. However, Savage, Garrett, and Hauville agree that, in most cases, the advantages gained from acquiring the latest technology outweigh those drawbacks. 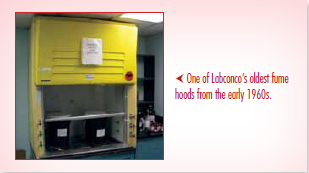 “If you don’t upgrade your ductless hood, you’ll end up with an older technology that may not keep your employees, scientists, and researchers as safe; you’ll end up with an older product with filtration technology that’s not able to last as long,” Hauville says. “So you think you may be saving by not upgrading, but today’s filtration technology on ductless hoods is capable of lasting longer than it used to and it’s capable of handling more chemicals than it used to, so the products are safer.”

However, vendors caution users to do their homework before buying. Because the fume hood industry serves only a small number of consumers, it isn’t regulated, Hauville says. 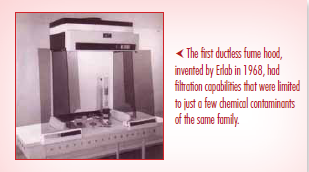 “Don’t upgrade your product thinking you’ll immediately get the latest technology, the latest filtration, and so on; manufacturers aren’t obligated by law to actually perform any test or provide any upgrade,” he explains.

Savage adds that for ducted hoods, upgrading to the latest high-performance technology requires more than just buying a new unit.

“Unless you change the mechanical system, or specifically the volumetric rate of air that’s being pulled to that mechanical system, you won’t realize any actual savings by changing just the fume hood,” Savage says. “It can be a bigger project than people 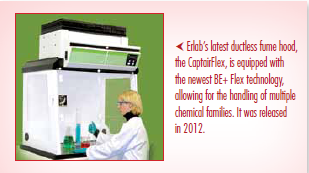 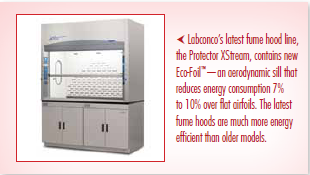 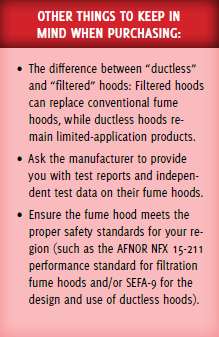