Jackson Pollock was a complex individual who had a tremendous impact on the art community with his unique style, technique, and vision. His works have attracted the attention of experts in the field of art conservation and authentication for many years. More recently, there have been discoveries of new paintings being possibly attributed to Pollock. In performing an authentication of any art object, it is important to consider provenance first, followed by careful technical analysis. Lastly, a thorough scientific analysis should be performed.

In this investigation, two paintings are reported to have been given as payment to a hotel located in Mill Hall, PA in 1952 or earlier. The custody of the paintings is well documented from this point on. The two paintings were purchased privately in 1991 by the current owners. The previous owner purchased both paintings from the Lockhaven Motel in 1961, while traveling through Mill Hall as a salesman. The Lockhaven motel which was opened in 1961 by Ralph Vogel was razed from the Clintonian Hotel Tavern, which opened in 1946 and purchased by Mr. Vogel in 1952. The paintings are applied to Masonite board that was readily available in the time frame under consideration. The paintings, not being considered of high value at the time, had been trimmed to fit into frames already available to the owner. One of the paintings has a Jackson Pollock signature and the other is absent of any signature. There is paint splatter on the back of both objects and three partial fingerprints on the multicolored painting (Mill Hall 1). On the predominantly black and white painting (Mill Hall 2), it would appear that Pollock experimented with applying paint in the form of letters using his unique form, Figure 1. He used his own name in doing this and the letters of his name are evident under close examination. 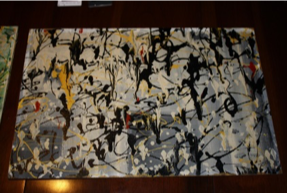 Figure 1: Mill Hall 2 painting with Jackson Pollock lettering evident on bottom half of object
The scientific analysis of these two paintings was conducted utilizing well established methods. A visual analysis of the objects was performed using light from the UV to the NIR. This allowed for the identification of any potential underlying drawing or painting. An elemental analysis was conducted using x-ray fluorescence (XRF) spectroscopy and the chemical analysis utilizing infrared (IR) and Raman spectroscopy. The resulting spectra were compared to reference spectra collected from pigments of that time. Microscopic sections were removed in order to perform the microscopic IR and Raman microanalysis. A handwriting analysis was conducted by an expert in the field to compare the signature to other signatures previously attributed to Pollock. Lastly, the retained fingerprints were analysed by an expert in Pollock fingerprints. The results of the investigation will be presented.
Sponsor