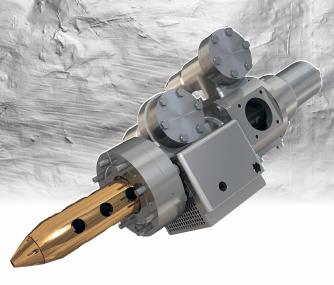 Accurately quantifying the chemical compositions of metal oxide samples with X-ray photoelectron spectroscopy (XPS) can be hindered by adventitious carbon contamination, which is typically present on the surface. This application note shows how the Thermo Scientific™ K-Alpha™+ XPS system, along with a dual mode monatomic and gas cluster ion source, was used to observe the effects of cleaning metal oxides with ionized argon clusters.

XPS (also known as ESCA) is an analytical technique used to provide chemical information from the top 1–10 nm of a sample; any small surface layer of carbon contamination can have a noticeable effect on the quantification of the sample. Most XPS systems are equipped with an ion source that can be used to remove surface material for cleaning or depth profiling of samples. This ion source usually produces monatomic ions of noble gas, typically argon. When metal oxides are cleaned with monatomic argon ion bombardment, the contamination will be cleaned off the surface; however these ions also penetrate the underlying sample, causing chemical damage even at low ion energies. This is typically seen as reduction of the oxide, due to preferential sputtering and removal of oxygen.

The Thermo Scientific™ MAGCIS™ argon cluster ion source counters this difficulty. It allows sputtering of the surface using large cluster ions, which do not penetrate the oxide surface, allowing chemical state information to be preserved while still cleaning contamination from a sample. The dual mode MAGCIS source can also generate a monatomic beam when profiling into a harder inorganic substrate. With the ability to provide both cluster ions and monatomic ions, the MAGCIS source offers versatility and convenience for a range of sample types. We describe how the cluster mode of MAGCIS can be used to clean an oxide sample without inducing reduction in the remaining surface.

The K-Alpha+ XPS instrument was used to acquire spectra from a sample of tantalum pentoxide. The Ta2O5 foil was mounted on a standard K-Alpha+ sample holder. Spectra were taken at three different areas following differing cleaning processes. At the first area, spectra were taken in its as-received state with no cleaning performed, at the second position the sample was sputtered with 200 eV monatomic ions before analysis, and at the third position, the sample was analyzed following sputtering with singly ionized argon clusters. The MAGCIS ion source allows the creation of argon clusters with a range of beam energies and cluster sizes. For this experiment, the cluster beam used had a beam energy of 4 keV and the cluster size was 1000 atoms. Survey spectra (wide scans that cover the entire elemental range) were also collected from the areas that had no cleaning performed on it, and the area that had been sputtered with the cluster ion beam. 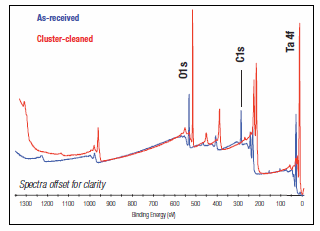 Figure 1: Comparison of XPS survey spectra before and after argon cluster ion cleaning.Thermo Fisher ScientificA comparison of the XPS survey spectrum taken from the Ta2O5 sample in its as-received state and cluster-cleaned state can be seen in Figure 1. The two spectra are similar, however the as-received spectrum shows a large amount of carbon contamination on the surface, as evidenced by the large peak at 285 eV. After the sample has been cleaned using the argon cluster beam, this contamination is greatly reduced. Quantifying the spectrum shows that the surface is Ta2O5. Table 1 shows the atomic concentrations for the two spectra shown in Figure 1. From both Figure 1 and Table 1, it is clear to see that after cluster-cleaning, the surface contamination has been removed.

Table 1: Atomic concentrations from before and after cluster-cleaning.Thermo Fisher Scientific

Figure 2 shows a comparison of Ta 4f spectra from the three areas on the surface: as-received, after a 200 eV monatomic ion clean, and after cluster ion cleaning. The monatomic ion beam-cleaned surface shows clear signs of reduction, evidenced by the shoulder on the low binding energy side of the doublet, compared to the as-received spectrum. This corresponds to approximately 30% of the surface being reduced due to ion-induced chemical changes. A 200 eV monatomic ion beam provides a low beam energy, yet still causes reduction. Using more common monatomic ion beam energies, such as 1000 eV, would cause considerably more damage. The cluster cleaned surface does not display this reduction, ensuring that the stoichiometry of the surface is preserved following removal of the carbon. The surface compositions can be seen in Table 2. 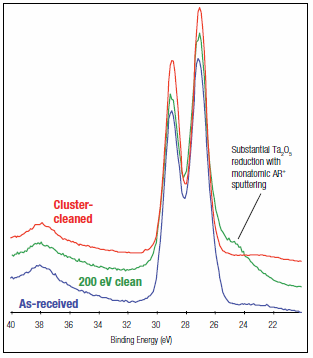 Table 2: Relative intensities of Ta 4f oxide and reduced components before and after sputter-cleaning.Thermo Fisher Scientific

A Ta2O5 sample was cleaned using both monatomic and cluster ions. The difference between XPS spectra – after the cleaning had taken place compared to the non-cleaned surface – is clear to see. When the MAGCIS ion source was used in monatomic mode, the sample had significant damage incurred on the surface, reducing the signal. Whereas when the MAGCIS source was used in cluster mode, there was no visible damage, whilst the surface was still cleaned of adventitious carbon. Even using low energy monatomic Ar+ ion sputter-cleaning causes a significant amount of Ta2O5 reduction, proving cluster ions can be vital in metal oxide analysis. Gas cluster ion beams have been demonstrated for the successful cleaning of inorganic samples without any visible signs of oxide reduction, and without inducing chemical changes to the surface being measured.

To see the PDF version of this document, click here.