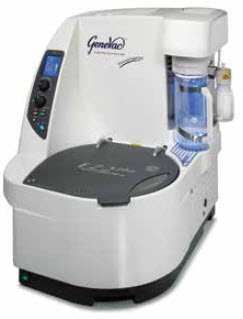 Solid-phase extraction (SPE) combined with liquid chromatography (LC)-electrospray ionization (ESI)-tandem mass spectrometry (MS/ MS) is the leading analytical methodology for the determination of XCM and AS. However, SPE methods can suffer from poor recovery, are time consuming, and expensive.

The aim of this study was to develop a simple, sensitive, and robust method for the quantification of seven XCM and three AS to regularly monitor the presence of these compounds at all stages of the drinking water production process.

Using the EZ2 Plus Evaporator many samples can be loaded, and dried under vacuum automatically with a predefined method that required no operator attention.

The precision of 10 replicates was excellent with relative SD values ranging between 3 and 6 % for the lower working range limit and 1 and 3 % for the upper.

Sample preparation recovery was similar for all compounds with an excellent average recovery of 90±4 % and an average RSD of 2 % for triplicate injections.

Mean recoveries from five independent measurement series were between 78 and 113 %. In particular, for the three most important compounds, diatrizoic acid, iopamidol, and acesulfame, recoveries were found to be almost 100 % with relative standard deviations ≤5%

A sensitive LC-MS/MS method has been developed which allows the simultaneous quantification of seven XCM and three AS in water. The developed method supports increased sample throughput, is easier to perform and cheaper than comparable methods using SPE enrichment.

Validation confirmed the sample preparation and analytical method to be robust, repeatable and consistent with high linear working range, high sensitivity, and a standard deviation across all samples of <6%. The method has been accepted into routine use.