Consumers and regulatory agencies are expressing more and more interest in the true amount of sodium contained in food products. Sodium has traditionally been indirectly tested using a silver nitrate precipitation reaction:

The amount of sodium would be calculated by assuming a 1:1 molar ration of chloride ions to sodium ions in the food. This assumption is not necessarily the case when common sodium containing food ingredients such as sodium benzoate, mono-sodium glutamate or chloride containing ingredients such as potassium chloride are present in the food matrix as well as sodium ions that may be present in the food itself. Common methods of testing the true amount of sodium directly have typically been atomic absorption spectroscopy or inductively coupled plasma spectroscopy. Although specific to sodium for analysis, these techniques typically involve significant capital investments in equipment and infrastructure, costly ultra-pure reagents and lengthy sample preparation and system calibration. Metrohm USA is excited to announce a method of direct thermometric titration of sodium in food stuffs that is specific, rapid, robust and economical. Thermometric titration is a form of titration using the heat of enthalpy of entropy produced by a chemical reaction to determine the endpoint. This method of titration is free from the electrochemical and solvent effects that are present in many types of titration making them difficult to adapt to some food matrices. To determine the amount of sodium the food is first masticated or homogenized to make a homogeneous mixture. The prepared mixtures is then titrated with a standardized solution of aluminum containing a stoichiometric excess of potassium ions in the presence of ammonium hydrogen difluoride at ~pH3 to give an exothermic reaction, forming insoluble NaK2AlF6.

The titrant is standardized against a solution prepared from anhydrous sodium sulfate. 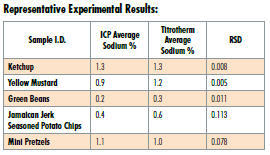 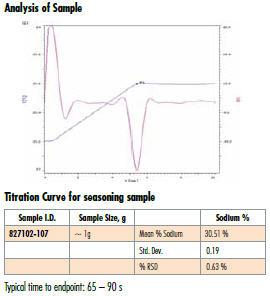