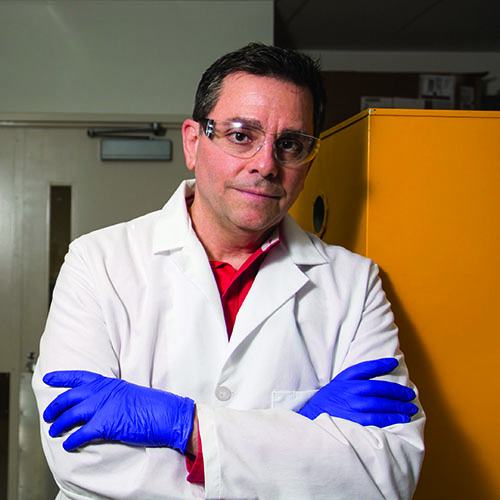 Konstantinos Kostarelos, PhD, associate professor at the Cullen College of Engineering at the University of Houston, talks to senior digital content editor Rachel Muenz about his team’s recently-published research focusing on per- and polyfluoroalkyl substances (PFAS) in firefighting foam and why these chemicals are difficult to remediate from the environment.

Q: Why is research into PFAS chemicals so important?

A: First, we should note that there are several compounds in the group of chemicals known as PFAS that have been shown to cause adverse health effects. According to the US Environmental Protection Agency, PFOA [perfluorooctanoic acid] and PFOS [perfluorooctanesulfonic acid] can cause reproductive and developmental, liver and kidney, and immunological effects in laboratory animals. The fact that these compounds are known to resist degradation, and accumulate in the human body, means that they are a serious threat to human health. On top of that, these compounds were widely produced and used for a range of products found in the home (non-stick coatings, water-repellant fabrics, firefighting foam, and more), which translates into a rather ubiquitous problem that has different forms, depending upon the specific PFAS used. Our focus has been on groundwater affected by PFAS used to make aqueous film-forming foam (AFFF), typically due to application of firefighting foams that occurred either in response to an event or as a part of firefighting training exercises.

Q: Your recently-published research in Environmental Science & Technology Letters provides some new insights into why PFAS chemicals are so difficult to remediate. Please tell us about these findings.

A: Before starting our research work, it was observed that high levels of PFAS were being measured in soil or groundwater samples at locations where they should have been much lower when using conventional simulation models. Adsorption didn’t seem to explain the field observations, and my experience with surfactant formulations for subsurface applications was helpful to answer this dilemma. First, we conducted benchtop studies that found that AFFF formed viscous microemulsions when mixed with fuel. Rheological measurements found that viscosity to be rather high, which would negatively affect the flow of this microemulsion if it formed within the subsurface. The next set of experiments helped to answer an important question: would the microemulsion form within the subsurface? In other words, is there enough mixing energy to form simply due to infiltration into the subsurface? Two flow experiments confirmed that they formed and high pressure gradients would be needed to move the microemulsions once formed. In addition, by making careful laboratory measurements of the influent and effluent fluids, we quantified the amount of PFAS mass retained within the microemulsion to be nearly 80 percent.

Q: Why did you decide to focus on firefighting foam specifically?

A: This focus was a natural extension of my experience working with surfactant formulations to recover hydrocarbons from the subsurface. PFAS are found in several environmental compartments depending on their use. In this case, AFFF was widely used to prevent or extinguish fuel fires, and has been invaluable in that regard. At some of the sites, the application of AFFF may have been a single use in response to a fuel leak or a fuel fire, and at others the AFFF was used as part of training exercises where fuel was ignited and then extinguished with AFFF. This scenario describes my area of expertise: hydrocarbon and surfactants in the subsurface. Instead of developing a surfactant formulation to inject into the subsurface and recover a spilled hydrocarbon, we’re working with the formulation that is already there and developing a method to recover it along with the hydrocarbon.

Q: What key technologies/methods did you use in the study?

A: There are several lab technologies, but the most important has to be the analytical methods developed to quantify PFAS within aqueous and oleic phases by means of liquid chromatography time-of-flight mass spectrometry. The credit for this goes to my colleague, Dr. Jennifer Field and her research team at Oregon State University (OSU). They have been at the forefront for quite some time, and deserve to be recognized for their work. I need to make a point here with regard to the quantitative analysis and our work, highlighted in the recent publication that you cited: there is a significant difference working with a complicated mixture like AFFF that contains about 15 anionics and another 30 zwitterions, and a single compound like PFOA or even simple binary and tertiary mixtures. The physico-chemical behavior is vastly different and this is often overlooked within the scientific community. In order to understand the interactions that are occurring, the quantitative analysis of these 40+ compounds is extremely important. Hence my gratitude to the OSU research team led by Dr. Field.

Q: What challenges did you run into during the study? How did you overcome those challenges?

A: While technical challenges existed, I believe the challenge encountered in terms of scientific opinion was probably the greatest. The recent publication that you cited proposes a unique PFAS retention mechanism that was met with skepticism among other PFAS experts. The challenge was met with the utmost care to be correct in terms of our data, observations, and in how we presented our findings. Since it became clear that our work—being the first research team to identify the formation of Winsor type II and III microemulsions as a PFAS retention mechanism—would be scrutinized, the team at UH and OSU often duplicated each other’s work.

Q: What advice do you have for other researchers who are looking into doing similar research involving PFAS chemicals?

A: Our team’s strength is the diverse set of skills and experience that each team member, coming from a variety of disciplines, brought to bear on this issue. I would suggest other research teams also consider including experts from other fields of study that will offer a range of ideas and opinions.

Q: What are the next steps for this research?

A: As I mentioned, there doesn’t appear to be a good surrogate to quantify PFAS within aqueous and oleic phases at this time. We have been looking at two techniques with the potential to screen samples for PFAS content quickly and economically.

Q: What other research or projects are you working on at the moment?

A: My lab is focused on the subsurface environment, although a few projects have developed tangentially. One of those is a method to remove asphaltenes during heavy oil upgrading that is highly efficient and fast. Another is a chemical sensor we are developing that could be used in the subsurface for real-time, in situ measurements, but would also find use as a leak detector for any type of storage tank—such as those for water or fuel. Our work with surfactant formulations for hydrocarbon recovery was used after attempts were made over several years to recover all the jet fuel that leaked from an underground storage tank failed. We recovered more than 35,000 kg of fuel in only six months.

Employed in academia for 20 years, Konstantinos Kostarelos, PhD, has led research on numerous publicly-funded projects with agencies such as the National Science Foundation; Strategic Environmental Research and Development Program; National Academies of Sciences, Engineering, and Medicine; Cyprus Research Promotion Foundation; and the New York State Department of Transportation, and has mentored graduate and undergraduate students in research, actively disseminating technological advances by means of journal publications, conference presentations, and seminars. His research has applications in both the oil and gas industry and environmental restoration, so it is no surprise that Kostarelos has worked in both environmental engineering and petroleum engineering departments at the University of Houston. Kostarelos’ expertise is heavily focused on experimental research and development, emphasizing scale-up experiments for technology development.