It is common for researchers to think about lab safety as their compliance with policies, codes, standards, and inspection checklists. A researcher might ask, “Am I allowed to buy this hazardous material?” or “What rules must I comply with to install this new equipment?” Unfortunately, just following those rules is rarely sufficient to prevent serious safety incidents. However, when the rules are supplemented with tools for recognizing hazards, understanding risks, and taking action to prevent those risks, lab workers are empowered to better protect themselves, their research, and their colleagues.

This article will focus on a simple framework that describes the laboratory risk assessment method RAMP (recognize, assess, minimize, and prepare). RAMP is a concept that was originally described in the textbook, Laboratory Safety for Chemistry Students, written by Robert Hill and David Finster, and is now heavily promoted by the American Chemical Society’s Committee on Chemical Safety. One benefit of RAMP, and risk assessment in general, is that it is applicable to all scientific disciplines, not just chemistry. RAMP can also be used at all levels of lab worker experience.

Risk assessment is the practice of identifying hazards, evaluating the degree of potential harm, and determining ways to eliminate or reduce the hazards to a safer level. It’s asking the questions, “What can go wrong? What are the consequences? How likely are those consequences, and what can be done to make the process safer?”

As an example of RAMP in action, the Environmental Health and Radiation Safety Department at the University of Pennsylvania used the framework to assist a research group after they asked if they were allowed to purchase a hydrogen gas cylinder for their laboratory. While the simple response could have been “yes” with a reference to the flammable gas guidelines section of the university’s chemical hygiene plan, the more thorough solution was to guide them through a hazard assessment. Some key takeaways from this example will be outlined below.

The first step in the RAMP process is recognizing whether a procedure has any hazards. A hazard is anything that has the potential to cause harm. Very often, when people are asked about the hazards of their work, they’ll name the risks instead. The relationship between hazard and risk is like cause and effect. The hazard creates a potential for harm, and the risk is the harm that could occur because the hazard is there. Figure 1 helps to illustrate this difference.

The difference between hazard and risk

The most important letter in RAMP is the “R” because if lab staff never recognize that a hazard is present, there will be no opportunity to assess, minimize, or prepare. At the University of Pennsylvania lab, the researchers were planning to build a custom apparatus, and the procedure involved not just flammable gas, but also heat, flammable liquids, pyrophoric solids, and high pressure. To help recognize all the hazards in this research process, we asked the lab for their experimental procedure, which was much more involved than what’s covered by the university’s chemical hygiene plan section on hazardous gases. The researchers had only recognized the one hazard—flammable gas—because it was novel to their work.  Without identifying all the hazards in the process, they would not be able to do a complete assessment of the risks.

Understanding hazards and the risks they pose provides a foundation for the second step in the process, assessing the risks. The same hazard can pose a higher risk or a lower risk depending on the likelihood of it causing harm and the severity of the harm that it could cause. The risk level is determined by asking, “Will it happen?” and “How bad will it be?” In investigations of lab injuries, risk perception is a common contributing cause. Researchers will report that they did not use more stringent safety precautions because they did not realize that the consequences would be so severe, or they thought the incident was very unlikely to happen. When people perceive the risk as "high," they are more likely to be careful or to put extra controls in place.

Risks can also result from non-obvious aspects of the procedure. In the University of Pennsylvania case, the gas system was supposed to run for five hours, then be shut down. We asked, “What would happen if you just forgot, or can’t do the shutdown sequence after five hours because of an emergency?” The researchers had not considered that possibility. They admitted that a failure to shut down properly could create an over-pressurization risk. This was a low likelihood, but high-consequence risk. By identifying this risk of failure, we were able to plan controls to prevent it.

When the risks have been assessed, they can then be managed. Managing risks means putting measures in place to reduce the likelihood and severity of something going wrong. Risk management is accomplished through hazard controls. The “Hierarchy of Controls” (figure 2) helps describe the priority of risk management strategies based on which are most effective. 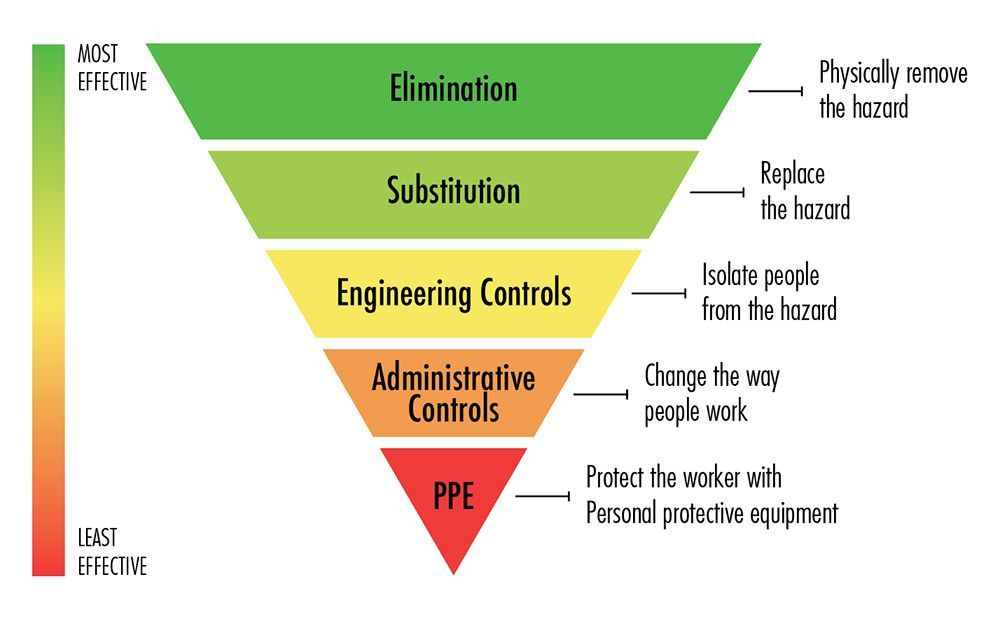 Figure 2: Hierarchy of Controls.
Adapted from the CDC: https://www.cdc.gov/niosh/topics/hierarchy/default.html

Ideally, the best control of all is to avoid the risk entirely, which is why elimination/substitution is found at the top of the hierarchy. Although it’s not always possible to avoid the task, it is often possible to reduce the exposure. In the case of the flammable gas process, the lab was able to purchase a small cylinder of flammable gas to accommodate their short-term needs, rather than order a full-sized cylinder, as they would normally do.

“Managing risks means putting measures in place to reduce the likelihood and severity of something going wrong.”

Engineering controls are the next best strategy to implement because they provide protection close to the hazard to effectively contain or isolate it. Examples of common engineering control equipment are autoclaves, chemical fume hoods, biosafety cabinets, glove boxes, machine guards, and even sharps-disposal containers. For the University of Pennsylvania experiment, the researchers used a fume hood to safely capture the exhaust gases, an appropriately rated gas pressure regulator to prevent over-pressurizing the system, a mass-flow controller to deliver the proper flow rate, and electronic temperature control to maintain precise heating.

Administrative controls, also known as work practices, can be effective if done correctly, but because these rely on individual compliance, they are rarely effective measures on their own. We worked with the researchers to add administrative controls to their procedure. These included a written order of operations for startup, instructions to clear the workspace of ignition sources, and notifications and planning for shutdown, such as setting an alarm and training a backup person to shut down the process.

The final level of the hierarchy of controls is personal protective equipment (PPE), which surprises many people because safety glasses, lab coats, and gloves are the first thing they think of when they hear “lab safety.”  The best controls, however, focus on preventing splashes, spills, and other releases. PPE provides extra protection in case those fail. The reason that PPE is compulsory in the lab is because it’s the last line of defense against those failures and unanticipated risks. Wearing protective equipment at all times is the only way to ensure it will be effective when the unexpected occurs.

This takes us to the last letter of RAMP—prepare if something goes wrong. A thorough risk assessment can be highly effective, but it cannot guarantee zero risk. By its very nature, research cannot exist without some element of the unknown, so preparing for emergencies is an important measure to reduce the severity of potential harm caused by that uncertainty. Before the lab started their work with hydrogen gas, we provided training on the procedures for responding to specific emergencies that could result from this operation, such as gas leaks and hydrogen gas fires.

Research is as dynamic as it is unpredictable, which is why the RAMP method does not end at P. It’s a process that requires continual reevaluation to notice and adapt to changes. Our work with the university lab resulted in a hazard control plan document describing the risk assessment and recommendations, but it also included the experimental parameters covered by our evaluation. Any change in scale, temperature, materials, pressure, location, apparatus, or operator could significantly impact the effectiveness of the hazard controls and would necessitate adjustments to the plan. Only the people doing the work can catch these changes and initiate that reassessment.

Neither safety professionals nor supervisors can monitor operations continuously, which is one reason enforcement of rules alone cannot protect workers from potential harm. Although compliance with rules will always be integral to lab safety, risk assessment provides researchers with the tools to protect themselves, their research, and their colleagues.

The Importance of Laboratory Quality and How to Achieve It

The Importance of Laboratory Quality and How to Achieve It

Three Keys to More Effective Project Planning in the Lab

Three Keys to More Effective Project Planning in the Lab