Residual solvents and organic volatile impurities (OVIs) in pharmaceutical products can have a significant environmental impact and pose risks to human health. Many quality control laboratories use static headspace sampling followed by gas chromatography (GC) separation and either flame ionization detection (FID) or mass spectrometry (MS) for low-level determination of residual solvents in pharmaceuticals. As evidence of the toxicity of these solvents accumulates— and more pharmaceutical products enter the market— there is a need for more robust analytical methods. The choice of carrier gas for these methods impacts sensitivity, throughput, and cost. Here we examine the development of a method for static headspace sampling followed by GC-MS for analysis of residual solvents in pharmaceuticals, supported by a hydrogen gas generator.

The choice of carrier gas for this GC-MS application can affect both sensitivity and velocity. One of the most commonly used mobile phases gases is helium, which produces good separation at high velocities, but can be expensive and availability fluctuates. Nitrogen produces the best separations, but requires longer run times. Hydrogen is becoming increasingly common, and offers better separations over a larger velocity range compared to helium, translating to faster analyses with better signal-to-noise ratios.

Researchers set out to produce and optimize a robust and repeatable method for the analysis of residual solvents in pharmaceuticals using headspace sampling and GC-MS with generated hydrogen gas. They evaluated the use of hydrogen as the carrier gas for the separation and detection of an ICH Class 2 mix of solvents in paracetamol tablets. The residual stock standard and internal stock standard solutions were prepared in methanol. Calibration standards and blanks were prepared with volatile organic carbon (VOC)-free sand, sodium chloride, and water. The paracetamol samples were crushed and combined with VOC-free sand, sodium chloride, water, and internal stock standard solution. Hydrogen gas for GC analysis was supplied by a VICI DBS NM Plus hydrogen generator, and the total runtime was 8.17 minutes. The compounds were eluted through a heated transfer line into the MS.

Calibration curves were linear over a wide concentration range, bringing the application well below the current required limit of detection. The method should provide sufficient sensitivity into the future if concentration limits are reduced. Analysis time was also faster compared to conventional methods using helium as the carrier gas. The last target compound (o-xylene) eluted in under six minutes, compared to 14 to 18 minutes when helium is used. These results suggest GC-MS supported by generated hydrogen offers superior sensitivity and throughput for residual solvent analysis. 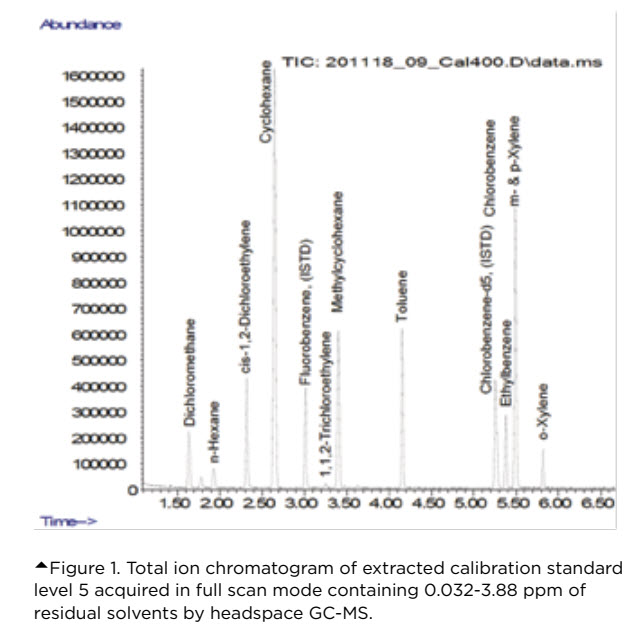 The analyses produced excellent separation and peak shapes for the residual solvents, as shown in the total ion chromatogram of extracted calibration standard level 5 (Figure 1). Retention time, calibration range, correlation coefficient, limit of detection, repeatability and accuracy for each compound are presented in Table 1. The method was tested by analyzing three different types of paracetamol tablets in duplicate. Good recoveries were determined for all residual solvents, which closely followed recovery values determined in method validation.

A hydrogen generator provides a consistent and reliable supply of highly pure gas and eliminates the challenges associated with replacing empty cylinders—including safety and contamination risks. Gas generators store very little gas compared to pressurized cylinders, and offer additional safety features such as emergency shut down if a leak is detected. A hydrogen gas generator is also a cost-effective alternative to helium cylinders. The price of helium constantly fluctuates and is affected by variation in supply, and there are ongoing delivery and rental fees to consider. These findings demonstrate that hydrogen should be considered as an effective alternative to helium as the carrier gas in GC-MS applications, specifically for the analysis of residual solvents in pharmaceuticals. The VICI DBS NM Plus hydrogen generator provides a consistent and reliable supply of pure hydrogen gas.