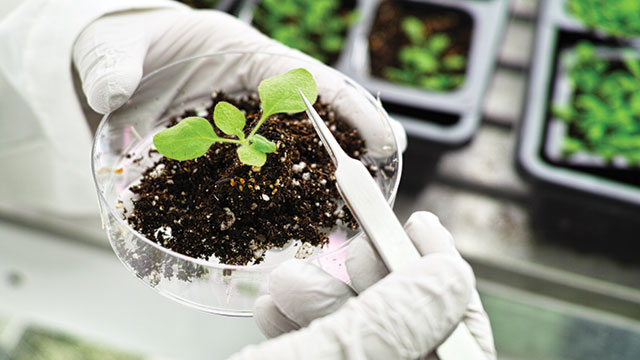 Plant cell culture extracts have become a popular ingredient in many cosmetics and personal care products. Plant cells possess unique characteristics that make them an appealing ingredient for skin rejuvenation treatments, notably their totipotent nature. Unlike mammalian cells, individual plant cells have the genetic information required to grow and differentiate into whole plants. They also produce secondary metabolites that protect against various stressors, such as ultraviolet (UV) radiation. This has led to the hypothesis that the secondary metabolites and phytohormones produced by plants may have anti-aging and regenerative effects in human skin. Bioprocessing enables cosmetic and personal care ingredient manufacturers to produce large quantities of secondary metabolites and phytohormones from a variety of plant species.

Some of the earliest cell culture studies began in 1898. Now considered the founder of plant cell culture, Austrian botanist Gottlieb Haberlandt began to culture isolated somatic cells and proposed the concept of totipotency—the ability of a single cell to produce the differentiated cells of the plant. In subsequent studies by Steward et al., carrot secondary phloem in medium were observed to produce new cells, which proliferated to form aggregates and eventually develop roots, supporting cellular totipotency for carrot cells. These early studies led to further research to identify and produce various plant cell metabolites for use in pharmaceuticals, food, and cosmetics.

It is impossible to keep whole plant cells alive for use in cosmetics. As such, it is necessary to produce and extract various secondary metabolites, such as flavonoids, phenolic compounds, and alkaloids in large quantities. Bioprocessing offers a sterile, standardized method to produce sufficient quantities of these compounds. It also reduces the environmental impact of harvesting plant cells because it requires less water and eliminates the need for pesticides. The process begins with the creation of dedifferentiated plant cells by selecting a portion of the plant (stems, leaves, flowers, etc.) that contains a high concentration of the compound of interest. The raw material must then undergo surface sterilization and be “wounded” to initiate the formation of a callus (a mass of unorganized cells) in response to the damage. The callus is then cultured in a dish and scaled up to bioreactors for mass propagation.

For scale-up from cell culture dishes to bioreactors, it is important to consider the different structural and mechanical components of the bioreactor to create the optimal environment for the cell culture. The efficiency with which oxygen is delivered to a bioreactor is measured as kLa, which is the mass transfer coefficient and the surface area of the gas bubbles in the liquid. The mass transfer of gases will depend on the impeller and sparger used in the bioreactor. More-efficient mass transfer is achieved using a sparger that produces smaller bubbles, due to the greater surface area. The impeller mixes the culture to ensure consistent temperature and nutrient gradients, and mixing speed as well as the type of impeller must be suited to the specific culture.

An additional consideration is whether to employ single-use or stainlesssteel bioreactors. Single-use bioreactor systems are gaining popularity due to their low cost, convenience, and portability. However, single-use systems require a constant supply of consumables and a well-trained staff to ensure proper assembly and breakdown, as opposed to more automated stainless-steel bioreactors. The possibility of chemical leaching from the bioreactor bag to the culture media must also be considered. Stainless-steel bioreactors are less prone to user error; however, they are not as flexible as single-use systems. Further, the monetary and environmental cost of disposable bioreactor bags may be offset by the cost of cleaning and sterilizing multiuse systems. Ultimately, the decision to work with single-use or reusable bioreactor systems will depend on the type of cell culture and the scale of production.

Bernhard Henes, head of biotechnology at Mibelle, explains that “sustainability and natural are huge issues in the skincare market, and still increasing. Biotechnology is useful to produce natural material in high concentration with reduced needs of land and water. It is especially interesting to access very rare or difficult-to-grow species.” Mibelle’s plant cell lines are produced “with single-use wave bag technology. It’s about reduced shear forces but also about not needing cleaning and sterilization protocols.” Indeed, this is why many other laboratories opt for single-use bioreactor systems over stainless-steel bioreactors.

Cosmetic and personal care ingredient manufacturers are turning to nature to develop safe and effective products for skin rejuvenation. Scaling up bioprocessing enables scientists and manufacturers to produce large quantities of plant cell culture extract under sterile conditions. In the battle against stress and aging, scientists continue to explore Mother Nature’s secrets.