The University of Toledo recently dedicated a new laboratory in honor of Dr. Nina McClelland, an alumna and lifelong pursuant of improving water quality and ensuring safe drinking water for the public.

The Dr. Nina McClelland Laboratory for Water Chemistry and Environmental Analysis is located in the Department of Chemistry and Biochemistry at The University of Toledo in Toledo, Ohio. The new lab was dedicated on Sept. 19, 2019, with McClelland in attendance for the ceremony. 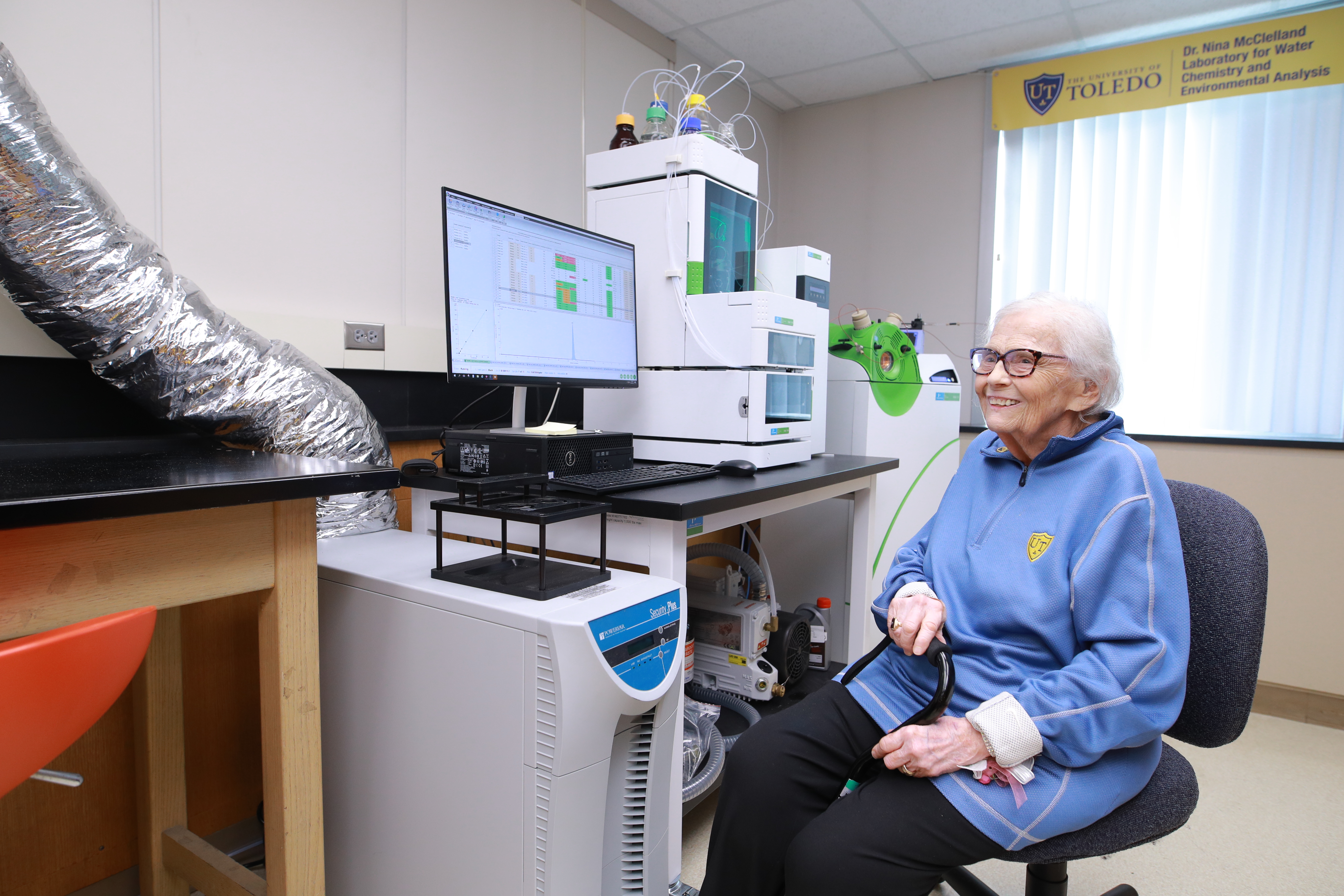 Dr. Nina McClelland pictured in her namesake laboratory at The University of Toledo.CREDIT: DANIEL MILLER, THE UNIVERSITY OF TOLEDO

The facility currently measures about 2,000 sq. ft., spread across four laboratories in Bowman-Oddy Laboratory and Wolfe Hall. A future goal is to create a more centralized facility. The project cost about $125,000, which involved renovating existing spaces to provide the requisite power and ventilation as well as a slight redesign of the existing lab spaces.

All renovations were performed with in-house design and a designated university general contractor, The Spieker Company.

The mission of the laboratory encompasses individual and collaborative research projects related to environmental analysis in the four laboratories of the analytical chemistry faculty in the department. By focusing on research related to water quality and environmental analysis under one banner, the laboratory will accelerate discoveries and encourage collaboration to solve pressing and emerging threats to the environment. The founding faculty include Drs. Jon Kirchhoff, Emanuela Gionfriddo, Dragan Isailovic, and Ajith Karunarathne.

The laboratory will focus on developing innovative scientific methodology, especially greener, more environmentally friendly methods to address threats to our water resources. A further goal is to create a hub for scientific discoveries to mitigate some of the most pressing environmental problems, and provide a state-of-the-art facility for the training of future researchers to be new leaders and environmental stewards.

The facility was bolstered by a partnership between Dr. Gionfriddo and Perkin-Elmer, which placed an additional Perkin Elmer triple quadrupole MS (QSight 220 LC-MS/MS) into her laboratory.

The work of Dr. Nina McClelland 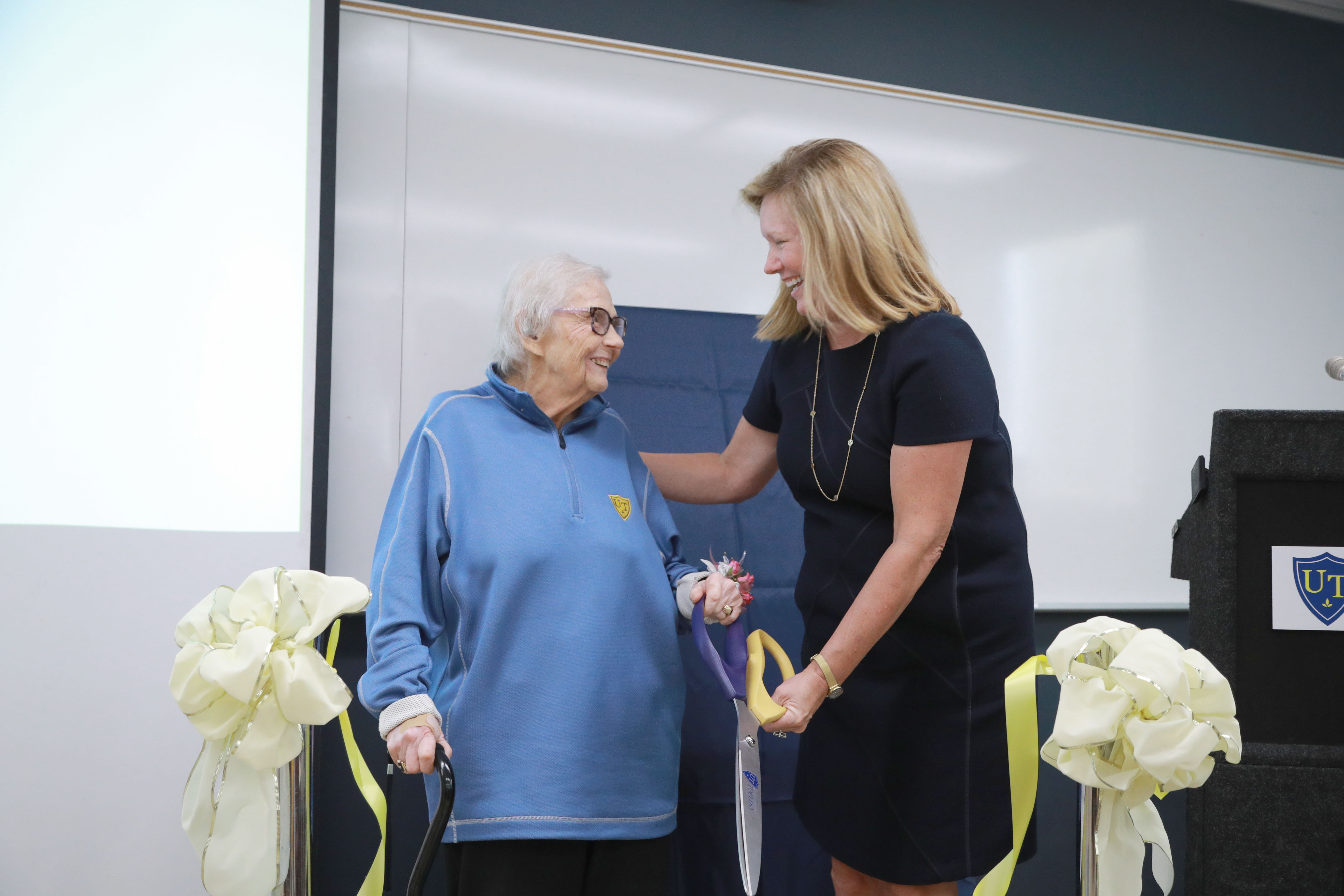 Dr. Nina McClelland pictured with Dr. Sharon Gaber, President of The University of Toledo.CREDIT: DANIEL MILLER, THE UNIVERSITY OF TOLEDO

McClelland began her career with the City of Toledo as a chemist and bacteriologist in the Department of Health at the Wastewater Reclamation Facility (1951-1956) and served as Chief Chemist from 1956-1963. She became the first woman in Ohio to earn a Class A license for wastewater treatment.

After receiving her Ph.D., she joined NSF International, formerly the National Sanitation Foundation, in Ann Arbor, Michigan, in 1968, and rose through the ranks to become Chairman of the Board of Directors and Executive Committee, President and Chief Executive Officer from 1980 to 1995. In 1995, she founded and was President of Nina I. McClelland, LLC, Consulting Services, providing her expertise to organizations throughout the world.

McClelland returned to the University of Toledo in 2003 and was the Dean of the College of Arts and Sciences until 2011. Her faculty appointment was in the Department of Chemistry and Biochemistry. She currently holds titles as Chairman Emeritus at NSF International, and Dean Emerita and Executive-In-Residence, College of Business and Innovation, at The University of Toledo.

She is a former board chair of the American Chemical Society, and has served on major committees including NIST, the National Drinking Water Advisory Council, and the Committee on Water Treatment Chemicals.

In an interview with The Toledo Blade about her work, she humorously stated, “I’ve ‘retired’ six times. That’s the only thing in my career that I’ve failed at.”

Jon R. Kirchhoff is Distinguished University Professor, Chair, Department of Chemistry and Biochemistry, at The University of Toledo. His colleagues Drs. Emanuela Gionfriddo, Ajith Karunarathne, and Dragan Isailovic contributed to this article.