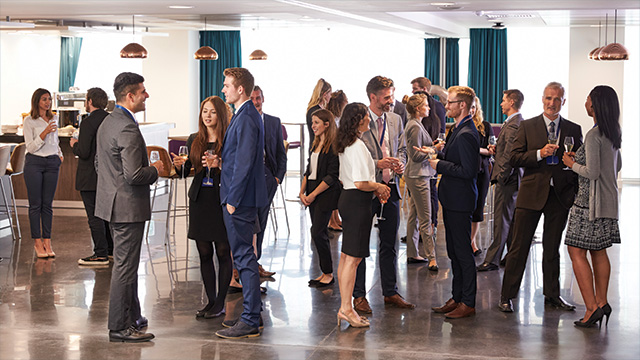 To many professionals, networking—the idea of finding acquaintances for mutual professional gain—is a cringe-worthy concept. Often, the thought conjures up images of awkward introductions and uncomfortable silences. Therefore, many shy away from events that encourage making such connections. Despite this, most everybody understands there are a variety of benefits to knowing other professionals in their fields especially in the sciences, where collaborations could be key to further advancing a field.

For Kelly McKinnon, a PhD candidate and researcher at the Woodruff Lab at Northwestern University, the importance of networking was apparent early on in her career.

One of the first projects she was involved with at Northwestern was developing Evatar—the laboratory group’s ex vivo female reproductive tract in a microfluidic system. This was something that had never been done before and required collaborations between multiple departments and institutions to succeed. Evatar consists of 3-D tissue models of the ovaries, fallopian tubes, uterus, cervix, and liver in a system that allows for communication between each tissue through circulating media. Programmable through a computer interface, it has pumps and channels to carry the nutrient media from culture to culture, similar to how our hearts and vessels do so in our bodies. Every one of the pieces of this system required a specialist in that field.

“Each 3-D tissue model was produced and validated by experts of that tissue independently before we ever put anything together,” McKinnon explains. “We also had a team of engineers at both Northwestern and Draper Labs who worked on the actual system mechanics, flow rate, etc.”

McKinnon and her advisors held weekly meetings with the entire group, a crucial requirement for engineering a system capable of supporting the physiological needs of these tissues.

The team went through many iterations, but it was the constant dialogue between the engineers, biologists, and subject experts that made the project a success. Together, they were eventually able to culture all five tissues for a 28-day hormone cycle, with the ovaries producing cycling levels of estrogen and progesterone, and each of the downstream tissues responding to ovarian hormones, like they would in the body.

“Taking on a project that was a little outside of Dr. [Teresa] Woodruff's expertise [ovarian biology and reproductive endocrinology] required that I collaborate and network from the very beginning,” McKinnon says.

And she isn’t alone in her need to work, and interact with, others. For many lab professionals, it’s a necessity to be aware of, and involved with, experts in their fields and sometimes with those in other fields, as exemplified above.

For A. Christian Whelen, administrator at the State Laboratories Division of the Hawaii Department of Health, occupying a leadership position in state public health as a laboratory director means he needs to work with various internal and external stakeholders.

“Internally, our laboratory supports multiple disease control and environmental quality programs,” he says. “It's critical that the state laboratory director and the state epidemiologist are tightly coordinated when responding to public health diseases, such as Hawaii's 2015–2016 dengue outbreak or [the] current mumps outbreak.”

Externally, Whelen routinely interacts with public health labs in other jurisdictions, clinical laboratories for reportable disease submission of specimens or isolates and personnel licensing, community colleges and universities for strengthening lab science education and applied research, environmental laboratory certifications, first responders for biological and chemical incident response, and community and political leaders to explain the importance of their public health laboratories in maintaining Hawaii as a favorable place to live, work, and play.

Traditionally, lab professionals networked by belonging to professional associations and attending and presenting at association meetings. Conferences were yet another established opportunity for meeting others in the field.

Though these larger events are important for national networking, Whelen cautions that “folks shouldn’t disregard local chapters and regional meetings.”

“Often relationships built during these smaller, local meetings can be very productive,” he adds.

Through these time-tested methods, lab professionals are sure to be able to extend their networks. However, with the advent of technological networking, more avenues are now available for managers to get to know, and keep in touch with, their peers.

“Technology has revolutionized the way we communicate with each other in the modern world,” says Chuba Oyolu, founding scientist at Counsyl Inc., a health technology company that specializes in DNA screening (South San Francisco, CA). “Prior to the advent of tools like Facebook and LinkedIn, the onus was on the individual to email or physically visit the institutions that they were interested in joining and sell themselves to potential employers. Thanks to the professional online profiles that many of us now have, it is not uncommon for employers to initiate contact with potential candidates for open positions within the organization.”

“In short, having an online social media profile has drastically simplified the process of being found and approached for jobs for which you may not have even known existed but for which you’d be a perfect fit,” Oyolu adds.

Despite the avenue of making contact—be it in person, on the phone, or electronically—professionals still have to approach each other in order to make contacts. How one goes about this depends on the individual and the circumstances because every person has a unique disposition.

“It can definitely be difficult, especially if you're naturally an introvert, as I am,” McKinnon says. Even so, she has her techniques to get over the difficulty of interacting with other scientists.

“What helps me at conferences or networking events is just jumping straight into the science,” she says. “If the normal small talk feels unnatural, talk about what you’re confident about—your research. You’d be surprised by how even the most socially awkward people—I’m looking at you, engineers—come out of their shells and shine when talking about their work.”

As far as McKinnon is concerned, if researchers are passionate about their work, it’s easy for them to talk about their research.

“Be a good listener, and come up with an insightful question,” she says. “One good question that shows you were really listening will be remembered more favorably than 15 minutes of small talk in most cases.”

Though he cautions there is no single correct method on how one approaches another person, Oyolu agrees that asking questions is a good way to approach others. For him, walking up to people is the way to go.

“One thing I have noticed about people from all types of backgrounds is that they generally like to talk about themselves,” he says. “If you can get someone talking by just asking them questions about their life and work while you attentively listen, you’ll have no problem networking and making friends.”

It’s possible that being an introvert is a common trait among those in lab careers. Whelen believes many gravitate toward laboratory sciences specifically to make scientific contributions while avoiding the limelight. All the same, it’s a comfort zone that, like others, he knows he needs to step out of once in a while.

“I try to learn as much about organizations and colleagues as I can before interactions,” he says. “That helps me find common ground, which facilitates conversation[s] and relationship building.”

Another strategy McKinnon employs at conferences is to sit at a different table for each meal, rather than sitting with the people she already knows. By making a point to sit with new people at each meal, she is able to expand her network, hear about different research, and perhaps make some new friends.

“The first few minutes might be awkward, but I’ve met so many people and made so many connections by just following this simple strategy,” McKinnon says. She also suggests third-party introductions, either at an event or via email. “People see you in a different light if someone they know personally brings you to their attention.”

A necessity of professional life

No matter the strategy, nor the feeling toward it, networking allows people to grow both individually and toward an overarching scientific goal, because they need to be able to exchange ideas and processes to learn and advance.

“I’ve had the good fortune of working in multiple fields throughout my life, and the pattern is always the same: Regardless of how smart, talented, or capable you are, you will need people to help you reach your highest potential,” Oyolu says. “You will typically learn from the folks around you at a much faster pace than you could learn on your own. You’ll learn everything from what to do in order to be successful to what to avoid doing to keep from sabotaging yourself and your career.”

And to have the cooperation and contributions of their peers, lab professionals need to be out there, visible to colleagues—whether that’s in real life or virtually.

“They can’t help me and I can’t help them if I remain invisible,” Whelen says. “Equally important is networking with other public health laboratories and professionals. If I encounter an unfamiliar situation or problem, there’s a good chance that one of my colleagues has experiences to share.”

And sometimes, visibility comes in handy during the most unexpected times, even when one is not looking to network. When in South Dakota for his high school class reunion last summer, Whelen dropped by to see his counterpart, the director of the South Dakota Public Health Laboratory.

It turned out Timothy Southern was very interested in how Hawaii works with the other U.S.-affiliated Pacific island jurisdictions. He described to Whelen difficulties with public health laboratory outreach to Native American nations in South Dakota, which struggle with access to healthcare, including timely laboratory diagnostic testing.

“We decided to approach the Centers for Disease Control Epidemiology and Laboratory Capacity program managers and propose a lab-to-lab mentoring relationship to investigate the potential for applying strategies that have worked in the Pacific to Native American nations in South Dakota,” Southern says. “That was unexpected.”

This unanticipated partnership is another example that networking, not just in public health laboratories, but in all labs, is critical to ensuring that preparedness and response capabilities are available when necessary. “No lab can do everything, but as a community of laboratories—there’s nothing we can’t do,” Whelen says.