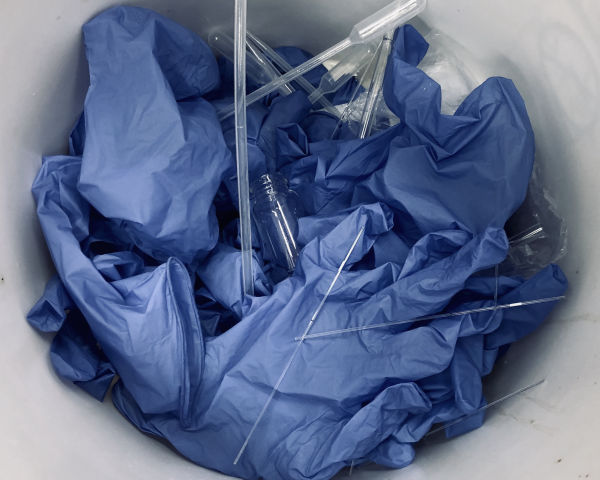 The inside of a solid waste bucket at a University of Michigan lab.
Credit: Brianna Barbu

Cecelia Kinane, 23, an engineering graduate student at the University of Michigan, researches synthetic materials that can mimic heart tissue and thinks a lot about how to do her work sustainably. She tries to clean and reuse whatever supplies she can to minimize waste and wants to focus more on working with materials that don’t come from fossil fuels. Her green ambitions extend beyond just her own project, too. She’s heard that some universities have lab sustainability programs that provide recycling for common plastic items that labs throw away, such as gloves or pipette tips, and she wants to look into recycling for her lab.

She didn’t know that there has been a lab sustainability program at the University of Michigan since 2011, which includes recycling for pipette tip boxes. According to Ken Keeler, the senior sustainability representative at the University of Michigan Office of Campus Sustainability, labs on campus have recycled a total of more than a half-million pounds of plastic tip boxes over the course of a decade. Kinane is surprised that she hadn’t heard about the program at all; in her opinion, “it should be way more widely advertised and talked about.”

Scientific research can have an enormous carbon footprint. Ecologists at the University of Exeter estimated in 2015 that research labs worldwide produce around 5.5 million metric tons of plastic waste per year, twice the total amount of plastic recycled in the United States in 2017, according to the Environmental Protection Agency. According to the Department of Energy’s Better Buildings initiative, laboratories can account for up to 70 percent of a campus’s energy footprint. As concerns about human impacts on the environment become increasingly urgent, many universities are starting programs to help labs become more sustainable—but achieving widespread participation is no easy feat. “Outreach is really the biggest challenge we’re up against,” says Emily Meymand, a neurodegenerative disease researcher at the University of Pennsylvania and member of the Penn Green Labs Working Group.

The first hurdle is simply getting the program on people’s radar. According to Nick Ciancio, the green labs coordinator at the University of Alabama at Birmingham, the 120 lab groups enrolled in his program, which has been around since 2016, represent only around 10 percent of labs on campus—but he still considers that a win given that it’s completely voluntary. Ciancio promotes the program in campus news outlets and events; a recent freezer giveaway led to “a lot of positive noise on campus.”  Participating labs get a sticker to display, which Ciancio says also helps increase awareness of the program, as well as additional incentives such as expanded recycling options and free freezer cleaning.

While running the sustainable labs program is Ciancio’s full-time job, at Michigan, it’s just one of Keeler’s many responsibilities. He says the majority of his time is spent on university-wide environmental metrics reporting and sustainability goal tracking, and he likes that visiting the labs gives him “a chance to get out and talk to people face to face” once in a while. While his priority right now is the university’s carbon neutrality goals, Keeler recognizes that lab sustainability has a big effect on the campus as a whole since “it has energy reduction, recycling, and public awareness all as part of it.” However, he says that figuring out how best to spend his time and resources can be “a juggling act.” He says he’s aware that the sustainable labs program could be promoted more widely but it’s an enormous task: “Every year, we have new students, every year we have new grad students—how do we keep the word out there?”

According to Elicia Preston, a lab manager in the department of genetics at the University of Pennsylvania and facilitator of the Penn Green Labs Working Group, “There are pockets of campus that are kind of a mystery as to how we would be able to reach them.” The group operates as a volunteer effort “for researchers, by researchers,” according to Elizabeth Main, sustainability coordinator at the University of Pennsylvania. “It makes more sense for the actual boots-on-the-ground work to be led by those who are in a lab on a daily basis,” says Main, although the drawback is that Preston and the other group leaders all have full-time jobs and promoting lab sustainability is something they do on the side. In fact, Meymand says most of the core group didn’t come together until last year; before that, Preston (who uses they/them pronouns) was essentially running sustainability initiatives by themself. Despite disruptions from COVID-19, the group hopes to reach out to more departments in the coming year. “The goal is to have as diverse a group of people as possible, at all levels of research,” Meymand says. “We really want to capture every perspective.”

Once people are aware of sustainability programs, the next challenge is getting them to change their habits. “People forget, or they get so absorbed in their work that they don’t consider the effects on the planet,” says Meymand. According to Allison Paradise, the founder and CEO of My Green Lab, a San Diego-based nonprofit that helps scientists connect to sustainability initiatives, the first step to creating change is to get people asking the right questions. “Questioning everything is the first, best thing that you can do, because everything else is very prescriptive,” she says. And what works for one lab may not work for the lab across the hall or in the building next door. The main function of sustainable lab programs, in her view, is to facilitate questioning and offer guidance to help scientists make sustainable choices that fit their research.

Figuring out the total impact of sustainable labs programs isn’t easy because there are so many factors, so programs celebrate any measurable success they can. According to Ciancio, the microbiology department at Birmingham recently cut energy use in their building by one percent despite a two percent increase in the number of people working there. Keeler estimates that Michigan’s chemical and equipment reuse program, which allows labs to donate extra lab supplies to be reused by others, saves the university more than $100,000 per year. The Green Labs Working Group recently reached a total of 14 labs who have signed a sustainability commitment, which Preston describes as “still not amazing, because there are hundreds of labs, but a couple more people have heard about it and done it,” and every little bit counts.

The most important metric, in Paradise’s perspective—which Ciancio, Keeler, and Meymand echoed—is the cultural shift that happens when scientists try to integrate sustainability into their work. Where a decade ago there were only 10 programs, according to Paradise, now there are more than 100, representing thousands of scientists worldwide. Scientists, especially younger researchers, are thinking and talking about integrating sustainability into research now more than ever, which Paradise considers a win. “When I think, ‘Has our program been successful in changing the culture of science?’ The answer is clearly yes.”