Water is a ubiquitous solvent used throughout cell isolation and culture. Therefore, water contamination may affect experimental outcomes. The use of ultrapure water is advisable for culturing of cells sensitive to environmental contaminants, such as endotoxins and bacteria. Cardiomycyte isolation experiments showed that using water contaminated with bacteria and endotoxins decreases cell viability, while using freshly produced ultrapure water dramatically increases it. Additionally, an ultrafiltration cartridge will efficiently remove large molecules that may be present in water.

Tissue and cell culture are important tools in numerous fields of biomedical research. Water is used in many steps of the tissue culture process, including buffer and media preparation as well as glassware washing. Thus, water quality may play an important role in experimental outcomes. Cardiomyocyte isolation and culture are presented here as an illustration of the potential impact of water contamination on tissue culture experiments. 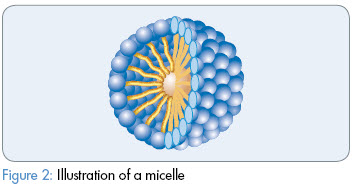 Endotoxins are major components of the outer membrane of most Gram-negative bacteria. They are a class of lipopolysaccharides (LPS). The endotoxin molecule consists of a long polysaccharide chain that carries the endotoxic feature of the molecule (O-antigen) and a lipid component (Lipid A) (Figure 1). Depending on the bacterial strain, LPS molecular weight may range from 5 kDa to 20 kDa. In aqueous solution, LPS form micelles or vesicles as large as one million Da1, 2 (Figure 2). Endotoxins stimulate macrophages and phagocytes to produce pro-inflammatory cytokines. They also affect the growth, function and cloning efficiency of many other cell types, including cells lacking endotoxin receptors.3

How to Remove Endotoxins from Water 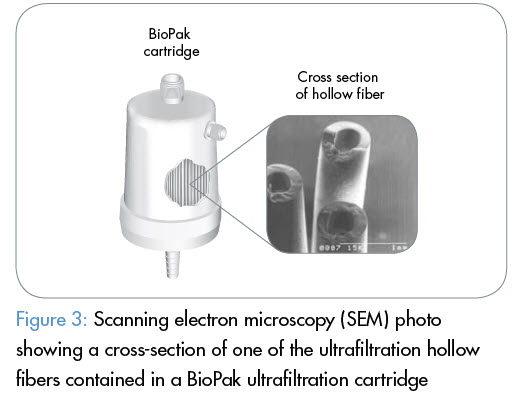 Although ultrapure water often is considered to be an inhospitable environment, it nevertheless can harbor some endotoxin-producing bacteria. Bacteria may be removed by filtration or autoclaving, but few methods of sterilization can destroy the remaining endotoxins. BioPak™ ultrafiltration cartridges (Millipore Corporation, Billerica, MA, U.S.A.) contain thin polysulfone hollow fibers designed to remove endotoxins and other macromolecules from water (Figure 3). Ultrafiltration is a pressure-driven purification process in which water and low-molecularweight substances permeate a membrane while particles, colloids and macromolecules are retained. Figure 4 shows how endotoxins spiked into water are retained by the ultrafiltration cartridge. Large amounts of endotoxin were added to ultrapure water (up to 1,000 EU/ml). Both the “challenge” water and the purified water (“output”) were analyzed using the Limulus Amebocyte Lysate assay (QCL-1000® Chromogenic LAL Endpoint Assay, Cambrex Corporation, Walkersville, MD, U.S.A). Most of the endotoxin (more than 99.9 %) was removed from the water by the ultrafiltration process. When the BioPak cartridge was used under normal conditions (without an endotoxin challenge), no endotoxin activity was detected.

Congestive heart failure, often caused by myocardial infarction, is characterized by a significant loss of cardiac myocytes, the muscle cells of heart tissue. Strategies for heart repair using cardiomyocytes are currently being studied.4 Isolated cardiomyocytes are a valuable tool for studying the heart muscle.

Ultrapure water, containing very few ions (resistivity 18.2 MΩ.cm) and an extremely low level of organic contaminants (total organic carbon ≤ 15 ppb) was used to prepare the buffers for the extraction procedure and the culture. Two types of water were used:

› Water A: Water purified by ion exchange and activated carbon, followed by ultrafiltration at the point of use [with a Simplicity® water purification system and a BioPak ultrafiltration cartridge (Millipore Corporation, Billerica, MA, U.S.A.)]. Only freshly produced water was used.

› Water B: Water purified by reverse osmosis, ion exchange and activated carbon [with a Milli-U™ water purification system (Millipore Corporation, Billerica, MA, U.S.A.)]. This water was stored in a carboy before use and was not treated by ultrafiltration. 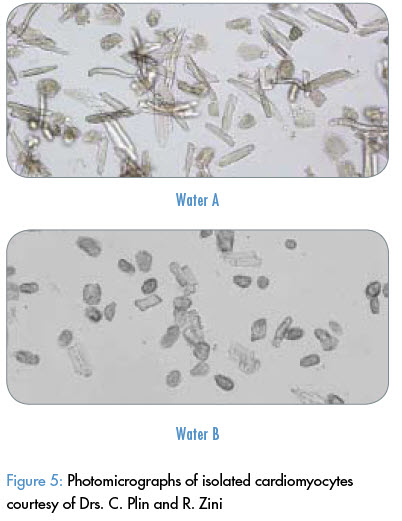 Cardiomyocytes are sensitive to endotoxins both in vivo (as in the case of systemic infection) and in vitro.5 Bacteria and endotoxin levels in the carboy-stored water were measured. The concentration in bacteria was approximately 4,000 CFU/ml and the endotoxin concentration was 8 EU/ml. The endotoxin level present in freshly produced ultrapure water is below the detection limit of commercially available endotoxin test kits.

When buffers were prepared with freshly purified and ultrafiltered water (Water A), many viable cardiomyocytes were obtained, as shown by their elongated and striated shape (Figure 5). However, when ultrapure water was stored before use and not treated with ultrafiltration (Water B), few viable cells were obtained. Therefore, the levels of endotoxin present in Water B were high enough to have a deleterious effect on cardiomyocyte cells during the isolation process.

High resistivity purified water (18.2 MΩ.cm) with low organic content (total organic carbon ≤ 15 ppb) and no endotoxins should be used when performing tissue culture experiments. Storage of the water after purification should be avoided as the water quality may degrade and bacterial contamination may occur, which leads to the production of endotoxins. Endotoxins may cause obvious changes in cell growth and morphology, as was the case for cardiomyocytes. They also may have more subtle effects and only influence cell function. Unknowingly working with endotoxin-contaminated cultures may lead not only to inaccurate or erroneous results, but also to loss of time, money and effort. Placing an ultrafiltration cartridge at the water purification system’s point of use will eliminate this potential risk.