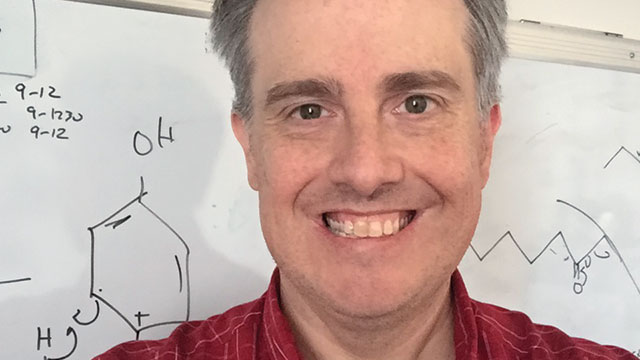 Dr. Karty received his BS from Purdue University and holds a PhD in analytical chemistry from Indiana University at Bloomington. Dr. Karty has experience with a variety of analytical techniques, including MALDI, GC-MS, LCMS, proteomics, and metabolomics, to name a few, and has been involved as a coauthor in 50- plus scientific publications. He has also worked as a consultant trainer for instrument vendors.

Q: What does your laboratory do?

Q: How many people work in the lab?

A: I have one full-time associate and three part-time undergraduate techs. We have a pair of GC-mass specs, three lowres LC-mass specs, one high-res LC-MS, one MALDI, and one high-res GC-MS. Q: What key changes or trends have you seen in MS recently? A: The instruments are getting so easy to use that non-specialists can now acquire really excellent data sets to answer complex problems. [That’s been seen in] the explosion of proteomics, where anybody can do LC-MS-MS with a good ion trap to identify proteins. [It’s also been seen in] metabolomics, where again, you can do LC-MS-MS or GCMS and have the end user do a lot of the heavy lifting in generating data on their own, rather than having the mass spectrometry expert generate the data. We’re still needed to help interpret the data and help set up an experiment so it’ll be successful, but once that’s done, the computerization of mass spectrometry and the automation has gotten to the point where a trained, skilled person can generate a lot of data on their own and answer their questions themselves. Also, accurate mass instruments are getting more and more affordable. I’m not going to say cheap yet, but they’re getting much more affordable and accessible to non-specialists.

A: The reliability of Q-TOF and the Orbitrap has really put accurate mass spectrometry into the hands of more people. That means that the manager is now more of a colleague than someone providing a service. It ends up being easier to get data, but setting it up [and] helping non-specialists design high-quality experiments is sometimes a very hard thing to do. They only bring us the really hard questions now. Now, I get to be a member of these research teams as opposed to just the mass spec guy in the corner. And, from my point of view, the instruments are getting easier to maintain. They don’t need as many parts, they don’t need to be calibrated as often, and the calibration’s more automated.

Q: What are some of the main challenges you deal with when it comes to mass spec?

A: Managing expectations of clients. For example, a colleague will come by with a paper and say, “I want to do this assay. I want to go find this peptide by LC-MS2 using a triple quad.” They don’t realize that the person who wrote that paper had a postdoc working nine months to get the conditions to make that work. Sometimes what a paper makes look easy is actually a mini-research project in and of itself. Managing your time and being able to see when a person has much more need than they think they do and helping that colleague realize what’s involved in getting quality data [is a challenge]. On the other hand, it’s much more rewarding when you have to get an assay up and running because you’re a more integral member of the team, and you make a very relevant contribution. And I, as the analytical chemist, learn something that I wouldn’t have learned just by recording the accurate mass spectra of 50 novel compounds that somebody made in a total synthesis. Also, the faculty members value your scientific contribution, so that makes for closer professional relationships, which is also good.

Q: What do you enjoy most about working with mass spec?

A: [With the more challenging questions], the answer’s usually there, whereas if you’re doing some sort of synthesis, you’re asking yes or no questions. In mass spectrometry, you’re often getting a quantitative answer—you’re looking for some sort of compound, for example—so you can get some satisfaction. A good day is getting really excellent data, the bad days are when you spend the whole day trying to tune [the instrument] or tracking down a minor problem that is vexing and doesn’t want to reveal itself. Troubleshooting can make for a nasty day. I think every lab manager knows that. Even if you’re troubleshooting a simple UV-Vis benchtop spectrometer—if it’s not working well and it’s not an obvious problem—that can be a very bad day, even though it’s a very simple instrument.

Q: What trends or changes do you expect to see in MS going forward?

A: Accurate tandem mass spectrometry will become standard. Almost any metabolomics person now expects to be able to do tandem accurate mass spectrometry to confirm the composition of their metabolites, whether it’s with a Q-TOF or an Orbitrap Q Exactive. I see people moving away from the really expensive quantification techniques. And I expect just a continued improvement in technology, with instruments getting not necessarily smaller and more capable but more reliable and more affordable, while providing the same awesome performance. In my career, I’ve seen TOFs go from resolutions of 5,000 to 10,000 being what you could buy to everybody seeming to have a resolving power of 40,000 to 80,000 mass spec lying around. As people do higher resolution separations, the mass specs have to speed up to keep up. So that will also drive instrument development to the point where we have the same resolution and sensitivity, but are now able to record it at a higher and higher scan rate.

Q: What about future plans for your lab?

A: Obviously, we’re looking at grant writing and we’re getting into precision medicine and metabolomics more, so [we’re looking at] getting high-resolution GC Q-TOF or Q Exactive-type instrumentation to assist with the precision medicine push that our university is pursuing. Also, we’re going to be training medical, biological, and chemical researchers to record their own data and interpret that data. You can generate so much data that one mass spec specialist in an office cannot support six projects that each generates gigabytes of data a day. So, I see my clients being much more active in the recording and interpretation of their own data. This is good, because it makes everyone more well-rounded in what they’re doing.

Q: What advice would you have for lab managers who are just getting into MS for their labs, but don’t have a lot of experience with it?

Q: What about advice for choosing a mass spec?

A: Be sure to listen to vendors critically. That is, understand what they’re trying to highlight and what they’re trying to hide. Not because they’re bad people, but because they’re [just] showing you their good side. Ask yourself what you’re going to do with the instrument overall. Finally, if you’re buying new equipment, send test samples that are relevant to your research or relevant to your client and make sure those samples will actually test the capabilities of the instrument to solve your needs. And, [in terms of general advice], make sure you answer all questions in a grant proposal. If an RFP [request for proposal] has a bunch of things they’re looking for, make sure you answer every one of them even though you may not think they are germane. Broader impact means broader impact.

Q: Did you have anything more to add?

A: As an academic core facility manager, I can say that the job is rewarding. It’s not as financially rewarding as industrial jobs, but there’s a bit more freedom than you’d get in the corporate world. I’ve been in this job for almost 13 years and I feel called to be here. It’s a good career path if you have the temperament for it. If you’re a team player, if you don’t have to be the star, if you want to do some good science and be part of a team—core facility manager is a good place to go.