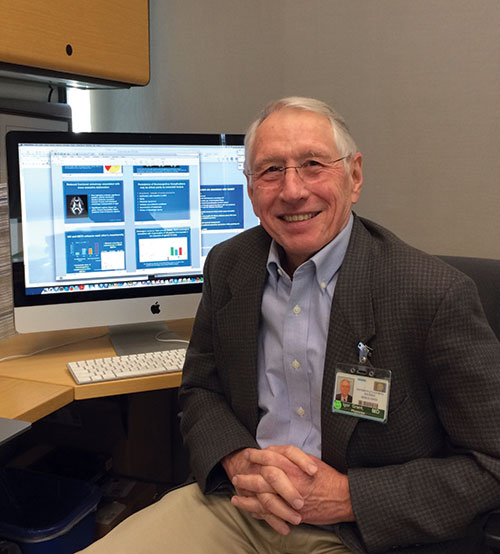 Igor Grant, MD, is a distinguished professor of psychiatry at the University of California San Diego, and the director of the Center for Medicinal Cannabis Research (CMCR), a position he has held since its inception in the year 2000. His own research largely focuses on the amelioration of neuropathic pain, particularly in HIV/AIDS patients. Here, he discusses the history and mission of the CMCR, his own background and research, and the present and future of medical cannabis.

Q: Can you give an overview of the origin and mission of the Center for Medicinal Cannabis Research?

A: California in 1996 passed the first medical marijuana law, called the Compassionate Use Act. In the years following, legislators were interested in the scientific basis for using medicinal cannabis. It came to the University of California San Diego, and myself specifically as the principal investigator, to set up a center for medicinal cannabis research. Our mission in part was to conduct clinical studies to establish whether cannabis was helpful with various medical conditions. We were established in the year 2000 and funded by the state legislature, to act as a mini research funding agency. We would solicit proposals from investigators at sites across California for proof-of-principle studies for various conditions. It’s a hybrid model, where we’re not a center that has a whole bunch of staff. We’re not a department—we’re more like a center without walls. However, CMCR has a core function with a laboratory that tests for cannabinoids and endocannabinoids, and we have a data management system because we want to be sure other people can analyze and aggregate data that we have collected. We have a sample and tissue repository—at the core level, the CMCR is continuing to assure that we are storing and providing leverage for future studies that may be unanticipated.

The conditions we focused on were those for which there seemed to be at least substantial anecdotal evidence and some animal study evidence. The initial condition was neuropathic pain, which is often associated with HIV/AIDS, cancer chemotherapy, and diabetes, where treatments are available but not always satisfactory, and where there was evidence that tetrahydrocannabinol (THC) might have antinociceptive effects. Six projects were funded in the original phase of research, most of which were related to HIV. To our surprise, all of these small-scale studies ended up with positive results, in that they showed at least short-term benefit in neuropathic pain. Another project involved multiple sclerosis, and showed that cannabis was helpful in managing severe muscle spasms.

The people of California then passed Proposition 64, which in 2016 legalized marijuana in California. One part of the bill provided ongoing funding for the CMCR, through tax monies that are gathered from marijuana industries. That’s the phase we’re in now, and what we’re doing again is issuing calls for proposals. Last year we funded approximately $3 million USD in proposals, with future plans to fund up to $1.5 million in grants per year with our recurring state funding. Our funded studies include: looking at whether cannabidiol (CBD) affects rheumatoid arthritis pain; early-onset schizophrenia, where there is evidence that CBD may act as an anti-psychotic; and examining CBD reducing craving in an animal model of alcoholism. We have also received philanthropic funding to study severe autism, with clinical, preclinical, and basic science aims.

Q: What does your own research concern, and what brought you into the medical cannabis field?

A: I have a lot of interest in neuropsychology, with most of my work having to do with the effects of diseases of various sorts, and of drugs of abuse, on brain and behavior. So, my research has included neurocognitive outcomes of polysubstance use. One of my earliest studies was when I was still in training at Penn [University of Pennsylvania], looking at whether marijuana-using students have comparatively worse cognitive function. A fellow resident and I recruited Penn medical students who were and were not regular marijuana users, and subjected them to neurocognitive testing. And of course, with how bright these people were, the result was nothing, no difference. Although that was my first introduction to marijuana research, most of my career hasn’t dealt with marijuana, except as part of a polysubstance-using population. And then I became interested in the effects of HIV on the brain; many people with HIV have substance use as a cofactor, so those two themes of HIV and drug abuse continued to intertwine. Therefore, it seemed natural to consider marijuana, except that the focus was now not just how bad is it, but also the possibility that it does some good things, which of course is not unusual for any drug.

Q: What do you see happening in the next five to 10 years for medical cannabis research?

A: Among the natural cannabinoids, I think it’s important to work on the possible longer-term implications—for example, there’s good evidence that neuropathic pain can be controlled. But most studies are relatively short-term; we really don’t know whether efficacy continues, because neuropathic pain is a chronic condition for many people. We also don’t know about different risk groups. Most studies have been done in people who are otherwise in generally good health, and relatively young. We don’t know what happens when you give these drugs to people in their 70s or 80s, and in the specific case of THC whether negative psychotropic effects outweigh beneficial effects. So, there’s a lot yet to learn even in indications where we already know there’s a benefit. Similarly, with CBD, we don’t know a lot about use in older people. Older people are the ones who have a lot of aches and pains, and if you look at who’s visiting legal dispensaries, there are actually a lot of people over 50 years of age. So how does it affect diverse populations, and what is the enduring benefit, or alternatively, the heightened cumulative toxicity?

Q: What are the most promising indications other than those for which the FDA has already approved cannabis-based medications?

A: Another promising area is schizophrenia, where there is data to suggest that CBD has an anti-psychotic effect. If that turns out to be correct, it would be really good because most of our anti-psychotic drugs cause side effects like extrapyramidal symptoms, metabolic symptoms, and sedation, so patients don’t like to take them, even though they do work. Another area is inflammatory disorders. We’re supporting a study of rheumatoid arthritis, but could inflammatory bowel diseases also be benefitted by CBD or THC, which also has anti-inflammatory properties? Another intriguing idea has to do with Alzheimer’s disease. Some preliminary data has come out of the Salk Institute, where in an in vitro model THC reduced amyloid formation, so it’s possible that cannabinoids may actually affect abnormal protein metabolism.

Cannabinoids represent an opportunity to interrogate a system that we have not worked with very much. For example, in psychiatry, we have done so much to tweak the monoamine system, with serotonin or dopamine, or even adrenergic signaling. But it could be that tweaking the endocannabinoid system, which itself exercises a lot of control over these other systems, might be a new therapeutic opportunity, and there may be drugs that can modify those pathways that have nothing to do with marijuana at all.

Q: What is the basis of the interest specifically in CBD rather than other characterized cannabinoids?

A: I think the interest in CBD has come about through people looking for cannabinoids that are non-addicting, don’t provide a high, and therefore may pass legal scrutiny more easily. The discoverer of THC as the principal psychoactive ingredient, Raphael Mechoulam, also characterized CBD back in the ‘60s, and initially proposed the antiepileptic effects of CBD, which somehow got buried under the interest in THC. And because THC is designated as Schedule 1, CBD has kind of emerged out of the dark. The problem I worry about is that it’s now touted for everything—that it will cure all conditions, you can rub it on your skin, take it by mouth, and we really don’t know much about any of that. With delivery systems, we don’t know whether something that’s applied topically actually gets to the place you need it to get to—we need more research on that.