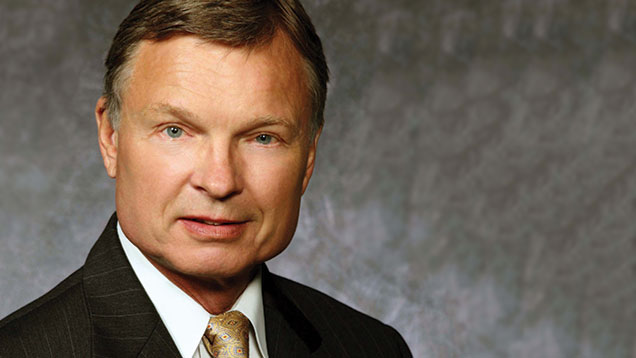 Daniel W. Armstrong is the Robert A. Welch Professor of Chemistry at the University of Texas at Arlington. He received his BS (1972) from Washington and Lee University and his MS (1974) and PhD degrees (1977) from Texas A&M University. He has nearly 700 publications, including 29 book chapters, one book (Use of Ordered Media in Chemical Separations), and 30 patents. He is considered the father of pseudophase (micelle and cyclodextrin-based) separations.

Q: What does your laboratory do?

A: We’re a big lab, varying between about 20-30 people, and we do research in a lot of different areas—for example, in ionic liquids and, obviously, enantiomeric separations. Broadly speaking, we look at new materials for separations. We also do work in mass spectrometry and in the theory and mechanism of separations. The nice thing about having multiple people in multiple areas is you find that one occasionally overlaps with the other or you can apply something you learned in one area to one of the other areas.

Q: What do you use chiral separations for in your work?

A: We’re the ones who design and develop/invent new chiral phases and new chiral separations materials and techniques, and we do it for HPLC [high-performance liquid chromatography], GC [gas chromatography], and even for capillary electrophoresis. We spend a lot of time trying to figure out how and why [chiral separations] work for some things and not for others. Once we develop these [methods], some of them are commercialized, and we’ll then use them for cutting-edge research in many areas. For example, we’ve looked a lot at brain and biological D-amino acids analysis, which appear to be of great importance. We also separate new synthetic molecules, so we work a lot with synthetic organic chemists and we use our methods for distinguishing synthetic products from natural products.

Also, we’re always interested in any difficult achiral separations. It has been found that there are many non-chiral or achiral separations that are best done with chiral stationary phases. We pushed this long ago, but the pharmaceutical companies are picking up on it now. Things like peptides are difficult to separate and often separate better on chiral phases even if they’re not enantiomers.

Q: What are some of the other recent trends in chiral separations?

A: Traditionally, chiral separations have been all about selectivity. Selectivity was all-important and it had to be, because if you didn’t have selectivity, nothing was going to work. Now we’ve evolved past selectivity into ultra-high efficiency, particularly as it relates to doing ultra-fast separations. We published one paper and we’re about to publish a few more, where we’re doing chiral separations in under a second and we have up to two pairs of enantiomers in less than a second. Why, you might ask, do we want go ultra-fast for chiral and non-chiral separations? Well, this is for a variety of reasons. Our focus is going to be doing chromatography at sensor speeds. Sensors have the advantage of being relatively fast—a few seconds or sometimes less than a second—but they have many shortcomings. They’re usually only good for measuring one thing; if you change the matrix or there are any interferences, it doesn’t work, whereas chromatography has the advantage that it separates the matrix and you can do multiple things, but it takes longer to do. So, what we’re focusing on is bringing chromatography to sensor speeds. I think it will be a pretty high-impact area. Recently, we’ve been able to separate 10 peaks in under one second.

Q: What are some of the most exciting new applications for chiral separations?

A: They’re going to play a major role in comprehensive two-dimensional separations. I think chiral phases are going to be used not just for chiral molecules but also for non-chiral, difficult separations. We’re pretty much there [with faster second-dimension speeds]. One problem is that the hardware (the chromatographs) must be improved in order to take full advantage of these new columns. Also, high-throughput screening is becoming more and more important. It has always been important in industrial labs, and it’s going to become more important even in academic labs. [Another application is] doing biological samples, not just synthetic molecules, but [looking at the] biological consequences of chirality.

Q: What are some of the key challenges you run into with chiral separations in your work?

A: One of the main ones we have in my lab is having enough HPLCs to go around. Going ultra-fast helps with that a little bit. For example, we were doing some biological amino acid work in brain studies, and the first one we did took us a year and a half to do all the analysis. There were thousands of separations we had to do, but a year and half to grind out that data was just too long. Now we can do the same amount of work with our new approaches in a few days or a few weeks, so that makes a huge difference.

Q: How did you achieve those faster speeds?

A: That came from combining chiral techniques with mass spec and the multidimensional chiral techniques with mass spec. Using the right combination of all of those really speeded things up for us and made all the projects more feasible. The gain in efficiency and the ability to get data out in a reasonable time and spend more time interpreting it and then designing further experiments—that’s all becoming far more reasonable. If we had to spend a year and a half generating data for every study, it would just be interminably long and inefficient.

Q: What advice do you have for those who are new to chiral separations?

A: First of all, there are a lot of different chiral phases out there. Whichever chiral phase you’re using, [vendors] want you to use their specific mobile phase. But you can’t use one company or one type of mobile phase [designed] for one type of column for other types of columns. The companies will try to get you to do that because it works for their column and not for the other [company’s] column, so their column always looks better. [Researchers] need to understand that. They need to use the optimum separation conditions for each chiral stationary phase. Using a mobile phase for one type or class of column for another can give you bad results.

Chiral phases are also more selective and sensitive to the nature of the mobile phase and the additives in the mobile phase, and this is true not only for HPLC but also supercritical fluid chromatography (SFC), which is widely used in chiral separations. The additives you use for one type of column in SFC could be additives that totally kill the separation with another type of column. You have to be really careful about that and think about what you’re doing. It’s harder to cookbook it or just use a standard set of techniques like people are used to doing with typical achiral separations—C18 separations, for example.

Q: What are some of the most exciting technologies you’ve seen coming out?

A: What’s coming in chiral separations now are the new higher-efficiency particles, particularly the superficially porous particles, or the so-called core-shell particles; these are going to be a real game-changer. You’re going to be doing separations in a third of the time, have about three or four times the number of theoretical plates, and be able to use a shorter column. These are the particles that are spurring the ultra-fast separations and the ultra-high-efficiency separations that everyone’s going to be doing. I think the classic 25 cm long, 0.46 cm diameter column is going to become extinct. I can tell you that when my students use the new columns and you try to take them away and give them the old column back, they don’t want to do it. They want to keep the new columns because they’re just so much faster and so much more efficient. It’s easier to quantitate peak areas and saves time.

Q: Where do you see chiral separations going even further into the future?

A: Chiral will always have the chromatographic advantage—because enantiomers have the same mass, you can’t tell them apart easily by mass spectrometry or anything like that, so you’re always going to need chiral separations even far into the future. As far as instrumentation, I think as you get to fast higher-efficiency separations, the equipment needs to change and evolve. Even UHPLCs aren’t good enough for these typical high-efficiency separations. Even for an advanced UHPLC, the detector speeds need to be faster, the dead volume needs to be smaller, the pumping and the flow rates have to be higher, and they have to be able to take a higher back pressure. The columns have evolved faster than the instrumentation. The instrumentation has to keep up and so there’s always that challenge.