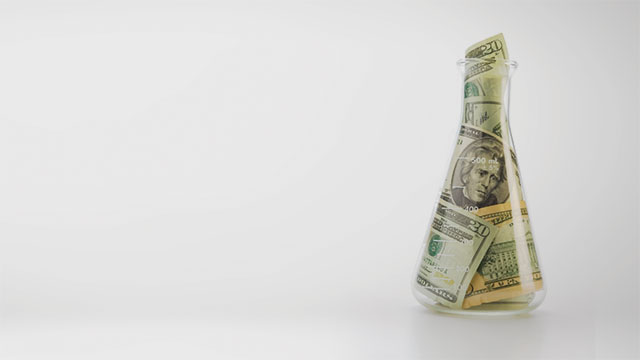 Two years ago, Susan Culican was forced to close her basic science research lab due to lack of funding. “The funding environment was so abysmal that it literally became impossible to fund quality research,” said Culican, an associate professor and director of the ophthalmology residency program in the Department of Ophthalmology and Visual Sciences at the Washington University School of Medicine.

Though she had been able to keep her lab alive for about five years on so-called soft funding through small grants from various charity organizations, that money was only enough to cover the cost of her research animals and lab technician’s salary. Culican explained that many such grants require that faculty salary can’t come out of that funding— which makes sense because there would be nothing left for the research—but it means that researchers have to pay their own salaries. For her, that meant more hours seeing more patients at the clinic and less time for research.

“I didn’t have the quality time to put in to supervise and direct the project and be able to spend time thinking about the data,” she said.

It also meant that what free time Culican did have was taken up writing grants. The research was no longer fun for her. “It was literally spending every free minute I had writing the next grant . . . and there was no time spent actually doing the science, which is what I loved about it,” she said. “I didn’t want a job as a grant writer—I wanted a job as a scientist.”

Ultimately, with the soft funding not being adequate and her National Institutes of Health grant applications not being funded, Culican made the difficult decision to close her lab. However, that decision eventually led her to crowdfunding, a still relatively new approach to raising funds for science.

After changing her research focus following a discussion with her former post doc advisor, Culican had an even tougher time obtaining funding, though her project has the potential to have an extremely broad impact. The question she hopes to answer is whether the average person, through crowdsourcing, can rate eye surgeons in training as well as experts. If they can, such crowdsourcing could provide a cheap and effective way to determine whether trainees are ready to practice on their own or need further training. And it could apply to other types of surgeons as well. After more unsuccessful grant applications, Culican stumbled across the science-specific crowdfunding site Experiment.com, which is based in the US.

“That [public] piece of it made me think, well, this crowdfunding approach is going to be a better approach because I want the 70-year-old who’s getting ready to have their cataract surgery done to read my project,” Culican said. “I want the family member who has a grandparent who had a bad surgical outcome to understand why that happened. But we have no way of measuring the surgical skill of our trainees at this point.”

Culican’s story is not unique, as underfunding science has been an issue for many years now, but science-specific crowdfunding sites only began to pop up around 2012. Five years later, it seems crowdfunding science is here to stay, with many scientists embracing this funding method. Experiment.com alone has funded over 700 projects, raising over $7 million.

Why scientists are crowdfunding

For Jamie Barras, head of the Humanitarian Technologies Lab in the Department of Informatics at the UK’s King’s College London, crowdfunding was the perfect fit for the small amount his team needed to test their explosives detector for removing landmines after conflict.

“We work in an area—humanitarian technologies research— where funding is always tight; when we realized we needed funding for an extra set of field trials beyond what our main sponsor had generously given us, we started looking for ways to raise that; it wasn’t a huge sum of money, a few thousand pounds [£5,000, around $6,500 US], but the need was there. At the same time, we knew we didn’t want to get tied into a new contract or contracts that might conflict with the aims and rights of our main sponsor.”

For Barras and his team, crowdfunding on Crowd.Science, a science-specific platform in the UK, offered the most freedom, plus new opportunities to engage the public in their work. That benefit of crowdfunding— engaging the public—also led Ruth Morgan, founder and director of the University College London Centre for the Forensic Sciences, to fund her project through Crowd.Science.

Her campaign aims to create a new forensic science lab to improve the interpretation of evidence in criminal cases, thus reducing miscarriages of justice—but most funding in forensic science in the UK goes toward new technologies, she said.

“We’d exhausted our options in terms of traditional funding,” Morgan said. “With forensic science so embedded in society and justice, it [crowdfunding] seemed like a really positive way of trying to make sure this research happened by getting involved with the public and making sure that people understand that it’s not quite like CSI. It’s not as simple as just following the evidence and getting a really clear answer.”

Morgan’s campaign is different in that its funding goal is much higher than the average crowdfunding project where goals are usually around a few thousand dollars, as most sites recommend researchers set their funding goals below the $10,000 mark. Morgan and her team are looking for £1 million (about $1.3 million US) to fund their forensic evidence research laboratory. However, they’ve also gotten backing from the Alexander Mosley Charitable Trust, which has pledged to match-fund all donations, both in-kind and financial, up to a maximum value of £500,000 on a pound-for-pound basis, and received equipment donations from Oxford Instruments, JEOL UK, Foster + Freeman, and Illumina with a combined value of £95,000 (around $125,500 US).

Researchers aren’t the only ones in the scientific realm benefitting from crowdfunding. Lab equipment startups have also been among the success stories, though most have made their mark using mainstream crowdfunding platforms such as Kickstarter, likely because they are offering a physical product as a reward. Opentrons, for example, funded its first personal pipetting robot, the OT-One, through a Kickstarter campaign, which provided $126,694 from 237 backers. The company’s aim is to provide affordable, easy-to-use robots to scientists who would benefit from automation, but can’t afford the pricier options on the market. Opentrons recently released the latest version of the robot, the OT-One S, which is twice as fast as the original.

Like Opentrons, Ezequiel Alvarez Saavedra used Kickstarter to launch his company’s product, the miniPCR, a budget-friendly PCR instrument geared toward educational or small labs with tight funding. The company he co-founded, now also called miniPCR, chose crowdfunding to get its name out there and connect with more people.

“We also wanted to get the funding to jump-start production of the machine,” he said. “We had been working on the machine for over a year and we had two prototypes. To start producing it in an assembly line, we needed some funding and we thought this would be a good way to do it.”

As with research, crowdfunding generally provides much less funding to startups than do traditional investors, but it can be less frustrating, Alvarez Saavedra elaborated. His company was surprised at the diversity of the 245 backers who supported their campaign, which was a success, raising $66,701.

He says one of the most important lessons he learned from that 2014 campaign was to lay the groundwork before the campaign is even launched. “We did quite a bit of reaching out to contacts before we started, and we did have some publicity during the campaign.” Having a large group of backers set to go as soon as your campaign launches is key, he said, adding that a clear rewards structure is also important.

“Having too many rewards is confusing for people,” he said. “We had a mix of buy one, donate one. I think people liked that. So, we donated one product to schools when people bought a [miniPCR]. I think having a clean structure is really helpful.” If people go to a campaign’s page and there are too many rewards, or the structure is too complicated, they’re more likely to leave instead of connecting with the campaigners, Alvarez Saavedra explained.

As funding for the sciences continues to get tighter, with the potential to become even more constrained due to possible budget cuts in the US and the loss of EU funding if Brexit goes ahead in the UK, could crowdfunding play a bigger role? Those who run science-specific crowdfunding sites aren’t sure such cuts will have a massive effect on this funding method.

“In terms of that working in sync with massive funding cuts that are happening in the US and with Brexit in the UK, I don’t think it’s necessarily going to happen in sync unless members of the public say, ‘Oh I don’t want funding to be cut; how can I put money toward science?’” Crowd.Science founder Natalie Jonk said.

Cindy Wu, co-founder of Experiment.com, added that any cuts to research funding in the US won’t affect how she and her team run their business. Their aim is to support scientists no matter what the funding environment is.

“Our mission remains the same, to democratize the research process so that anyone can do science,” she says. “The only way this affects my thinking is I spend a lot more time thinking about how we can make science move faster.”

However, there have been a few changes since Experiment.com got started. At the beginning, her team was more focused on ensuring funding for projects, but they “now measure success by the number of projects that are successfully executed.” The site’s funding success rate continues to be a steady 45 percent. Wu adds that making science more accessible and reproducible takes up most of her time nowadays.

“How do we bring out the recipe of science and make it available to anyone who wants to do science? You can start to see the beginnings of this at experiment.com/labnotes, where our community shares the scientific research process. We believe the magic is in the process, not in the proposal or the final peer-reviewed paper,” Wu said.

A major challenge Experiment.com is working on now is tackling the historic problem of only established scientists getting funding, while young researchers struggle. They have shifted their focus to work with scientists who are of graduate student age or younger. “We need to arm our young scientists with more power if they are to make it in the current system,” Wu said.

Across the pond, Jonk’s Crowd.Science is focusing on building stronger communities around various research areas, so that there are more backers ready to go for projects, making it easier to predict how well campaigns will do. “We can say, ‘We’ve got X number of people who are interested in this, probably X number of them will be interested in this specific project,’ and then it will be more predictable as to how much will be raised,” Jonk said. Building stronger partnerships with charities, instrument vendors, and other large organizations is another focus. Since its start, the site has hosted 30 projects and had a total of £0.7 million pledged so far (around $925,000 US).

“Overall our mission is to help scientists be in a position to do the research that they want to do,” she said. “Sometimes that [assistance involves the] funding and sometimes companies give equipment inkind and we can help be involved in those [partnerships].”

Next month, we’ll wrap up our series on crowdfunding in science with Part II, which will cover the challenges of this funding method, more of the benefits, and the keys to a successful campaign.