InTray is a culture device available with over 52 selective and non-selective agars for human clinical—as well as veterinary and environmental— testing.

With the rise of antibiotic-resistant infections, there is an urgent need for culture diagnostics for susceptibility testing both to provide appropriate treatments and to facilitate strain tracing and containment. However, sending a viable organism from point-of-care to the laboratory, which may take several hours to days, poses several challenges. These include ensuring safe sample collection, stable transport, and a viable organism recovery for replating and culturing. Biomed Diagnostics has engineered a novel culture media device that combines collection, transport, and culture in a single platform. The InTray and the InPouch are designed for POC specimen collection and inoculation. The device and selective media enables culture growth from the point of collection which eliminates the need to replate. For doctors this means a rapid, accurate cost-effective diagnosis so they can prescribe appropriate treatment.

A single device for microbial culture, transport, incubation, and results

InTray is a culture device available with over 52 selective and non-selective agars for human clinical—as well as veterinary and environmental— testing. The Intray is specifically designed for a non-technical user; simple to use, and requires no special equipment or additional medical supplies, other than a swab or pipette. After obtaining a sample, users inoculate the agar, and re-seal the label on the tray to begin culturing and send to the lab or place in an incubator. For anaerobic microbes, such as Neisseria gonorrhoeae, the tray contains a “ready to start” five percent carbon dioxide environment, that is activated by simply puncturing the seal. For aerobic microbes, InTray allows oxygen to flow while filtering out particles and contaminants. Following incubation, the device may be observed directly for phenotypic or chromogenic change for presumptive diagnosis. Isolates may be extracted for further molecular testing. 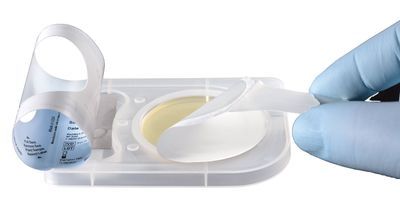 Traditional methods require the sample to be transported to the laboratory, replated to initiate culture, and incubated prior to obtaining a result. When culturing anaerobic organisms, a costly carbon dioxide incubator is also required. Inoculating the culture medium at the point-of-care eliminates replating, the sealed tray reduces risk of contamination and lab staff exposure, and can dramatically reduce the time to diagnosis—by up to four days in certain circumstances. In creating a suitable environment for anaerobic organisms within the device, InTray also obviates the need for costly carbon dioxide incubators. Eliminating recovery and replating steps also significantly reduces the risk of sample, or laboratory contamination. Unlike media prepared in petri dishes, InTray’s prepared culture media is formulated for long shelf life, simplifies inventory management and reduces product loss waste.

Culture isolation of Nesseria gonorrhoeae is necessary for susceptibility testing to detect resistance to select antibiotics and identify appropriate treatments. In a study led by a microbiologist at the Centres for Disease Control, four commercial transport systems were evaluated for recovery of Neisseria gonorrhoeae. According to the results, the InTray GC was optimal for transporting viable samples to the laboratory, and was validated for transit times greater than 24 hours. InTray is also recommended and listed as a preferred culture and transport device in the CDC’s Gonococcal Isolate Surveillance Program. InTray GC—as well InTray devices for several other microorganisms—are FDA cleared and CE IVD marked. 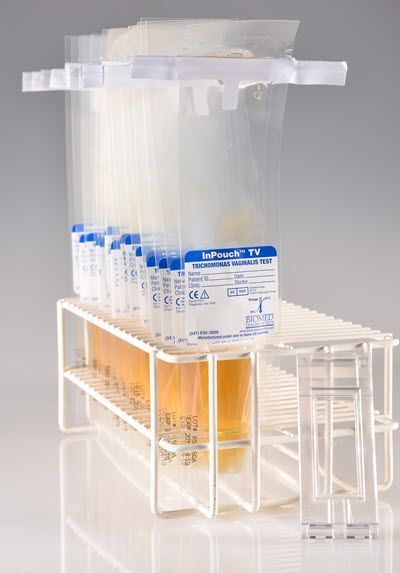 InPouch in a rack
BIOMED Diagnostics

Several InTray devices with COLOREX™ for visual chromogenic detection are approved for clinical use, in screening for AMR infections, including:

View the video presentations of the novel InTray design, how easy they are use, and how they may increase throughput at your lab.