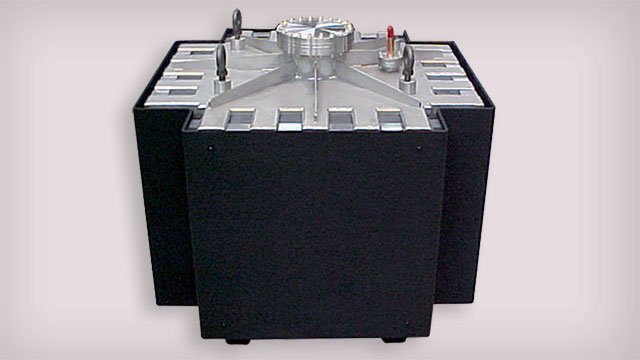 The Agilent VacIon Plus 2500 l/s Ion Pump used to produce the ultra-high vacuum for the LIGO instrument.

Energy and mass cause spacetime to distort and curve, and curved spacetime causes matter to move. GR also implied the existence of gravitational waves. These waves in spacetime would result from massive gravitational events in outer space. But even Einstein himself was convinced it would never be possible to measure them. Then on September 15, 2015 the Advanced Laser Interferometer Gravitational-Wave Observatory (LIGO) ‘observed’ the gravitational waves created by the collision of two black holes more than one billion light-years away from Earth. This was significant as this was the most direct observation showing that Einstein’s theory works in the most extreme conditions of curved spacetime. How did they do this?

Solution: To detect and measure gravitational waves is only possible by an instrument with exquisite precision that has been isolated from all sources of noise that would mask the tiny signal. This requires all the key components to be placed in a vacuum chamber with a pressure a trillion times smaller than normal air pressure.

A partner with LIGO for many years, Agilent Technologies custom ion pumps were incorporated into the LIGO instrument to help ensure a near-perfect ultrahigh vacuum condition. The vacuum pumps work by ionizing any residual molecules, then accelerating them to collide with an electrode and trapping them within the pump. This extreme vacuum environment was necessary to detect a measurement change equal to one part in a thousand billion billion (1 in 1,000,000,000,000,000,000,000).

Using this ultra-high vacuum solution, the LIGO detectors could then measure gravitational waves by using two arms of an interferometer placed at 90 degrees. Each arm is housed in a beam tube kept under this near-perfect vacuum. A laser beam, split in two, travels back and forth along each 4-kilometer arm, bouncing off mirrors at each end and recombining where the arms meet. Einstein predicted that a gravitational wave would change the length of the arms ever so slightly, and that any mismatch in the length of the arms would be detected when the beams recombine. That is exactly what LIGO detected—a distortion one thousandth the diameter of one atomic nucleus.

On September 15, 2015 after four decades of research, scientists observed the phenomenon for the first time, detecting waves that were 1.3 billion years old. And on October 4, 2017 the 2017 Nobel Prize in Physics was awarded to the three scientists who detected these gravitational waves for the first time in history—a discovery enabled with the assistance of Agilent state-of-the-art vacuum ion pumps.