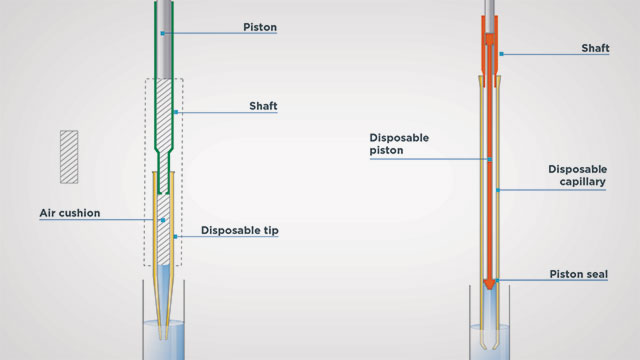 Problem: Air displacement pipettes dispense most liquids at a high level of accuracy. However, the viscosity, volatility, surface tension, and temperature of the solution can adversely affect the precision.

A liquid with high viscosity, for example, can cling to the pipette tip. Quick withdrawal of the pipette can cause an air bubble to form in the tip and reduce dispensed liquid volume. Similarly, surfactants reduce surface tension, causing a very thin film of liquid to remain on the tip walls. Volatile solvents such as acetone, hexane, and methanol leak. Cold liquids tend to be delivered in excess, while warm liquids are often under-delivered.

Room-temperature water yields the most reliable results, so when pipetting liquids with different properties, some researchers adopt workarounds, such as reverse pipetting, pre-wetting tips, or cutting the ends of tips. These, too, however, can introduce error.

To understand how, we take a closer look at the internal mechanics of liquid handling tools, and the forces involved:

Laboratory pipettes can function either via air displacement or by positive displacement principles. In an air displacement pipette, an air cushion separates the liquid in the plastic tip from the piston inside the pipette. As with any gas, the air cushion varies according to the characteristics of liquids, as well as, in part, by lab or protocol conditions (temperature variation, or humidity). The differing properties of volatile solvents affect the elasticity of the air cushion. Evaporation is a continuous phenomenon, and liquids such as acetone, hexane, and methanol evaporate so quickly that they expand the column of air inside the pipette, causing leaks. Leaks introduce error and contaminate the bench, and evaporation may contaminate the internal parts of the pipette. Pipette users themselves are also at risk, especially when they work with hazardous volatile liquids such as radioactive solutions. Additionally, corrosive samples such as acids may evaporate because of the air cushion inside the tips, leading to pipette shaft, seal, and piston corrosion after several pipetting cycles.

With a positive displacement pipette, there is no air cushion and no variation of the volume aspirated in response to the physical properties of samples. A piston replaces the air cushion and glides along the internal sides of the capillary for easy pipetting of viscous, dense, and surfactant liquids. The direct contact of the piston against the wall of the Capillary Piston ensures accurate dispensing. Likewise, volatile liquids and hot or cold solutions are aliquoted and dispensed accurately without leaks.

Unlike air displacement pipetting, there is no purge or “blow-out” step needed to remove residual sample from the tip. Instead, pressing the push button to the second and last stop on a MICROMAN E ejects the capillary and piston without hand contact, simplifying the pipetting process and removing the separate tip ejection button.

Positive displacement pipettes like MICROMAN E can optimize sample preparation for HPLC, qPCR/PCR, pharmaceutical formulations, and for handling biological fluids. Volatile liquids are aliquoted and dispensed accurately without leaks, thanks to the direct contact of the piston against the capillary. These novel pipettes protect users from leaks of hazardous liquids on the bench, and prevent the corrosion of liquids due to vapors.

For more information, go to: www.gilson.com/MICROMANHIW

How to Make and Dilute Aqueous Solutions

How to Make and Dilute Aqueous Solutions