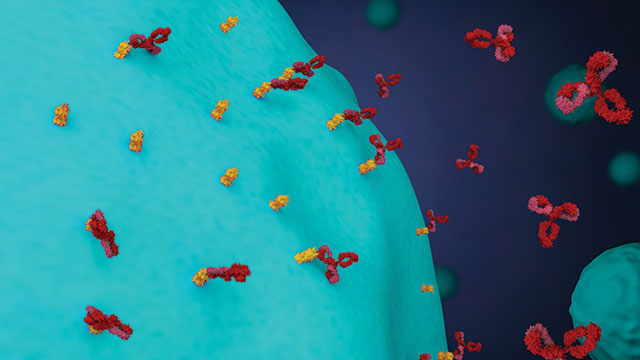 An astonishing 38 percent of men and women are diagnosed with cancer at some point during their lives, according to the National Cancer Institute at the National Institutes of Health. While this statistic is disheartening, it is important to note that the fight against cancer is not a losing battle. Between 1991 and 2015, the overall cancer death rate in the United Sates was reduced by 26 percent. Early-detection strategies and cutting-edge treatments are continuously evolving as a result of ongoing research. Therapeutic monoclonal antibodies (mAbs), for example, have emerged as a promising treatment strategy. Numerous mAbs have been approved for clinical use, and dozens more are under investigation as potential cancer therapeutics. The use of mAbs for cancer treatment began in 1997, when rituximab was the first mAb approved by the U.S. Food and Drug Administration (FDA) for treatment of some forms of non-Hodgkin lymphoma. Since then, mAb therapeutics have grown into a multibillion-dollar market. Prior to commercialization, mAb development begins with cell culture for cell line generation. Technological advances in cell culture automation have dramatically accelerated the development process by increasing efficiency, consistency, and sterility.

In 1975, Georges Köhler and César Milstein were the first to describe the creation of hybridomas for monoclonal antibody production. In an early study, they fused mouse myeloma and spleen cells from an immunized donor to produce cell lines that secreted anti-sheep red blood cell antibodies. The hybridoma technique is still used to develop cell lines for mAb production. Dr. David Fox is a professor of internal medicine in the Division of Rheumatology and the director of the Hybridoma Core at the University of Michigan. The Core offers antibody development services for preclinical antibody research and investigation, using the same process involved in therapeutic mAb development. Dr. Fox explains this process: “We receive the antigen from the person who wishes to develop a monoclonal antibody. We then immunize mice and test the serum to determine if the mouse is mounting an immune response. Once there is sufficient antibody titer in the serum, the spleen is removed to create hybridomas by fusing spleen cells with a cell line. Supernatant [fluid] is taken from the hybridomas, and the investigator screens for the monoclonal antibody of interest that will recognize a specific antigen and is appropriate for their application.”

Humanization techniques are required for antibodies destined for therapeutic use in humans. “Once they are considered a therapeutic lead, these mouse antibodies must be humanized (by genetic engineering) unless they are made in a humanized mouse, which allows more rapid progress to a potential drug stage,” explains Dr. Thomas Moran, a professor of microbiology at the Icahn School of Medicine at Mount Sinai and the director of the Center for Therapeutic Antibody Development.

Humanization techniques have moved mAbs into the clinic, and several are FDA-approved for use as cancer therapeutics. mAbs are used to target and bind tumor cells expressing cancer-specific antigens and induce cell death. Individual antibodies exhibit unique mechanisms of action. “Monoclonals can be used directly to bind to surface proteins on cancer cells to kill or inhibit their growth,” explains Dr. Moran. Trastuzumab (Herceptin), for example, targets the HER2 protein on the surface of breast and stomach cells. “[They] can work by recruiting immune elements, delivering toxins, producing CAR-T cells, or as bispecific antibodies that recruit T or NK cells to kill the cancer cells.” Tositumomab is used in the treatment of some B-cell non-Hodgkin lymphomas and is an example of a monoclonal antibody used to deliver toxins, as some of the antibody delivers a linked radioactive substance to the B-cells. Bispecific antibodies consist of two different monoclonals capable of binding to separate proteins simultaneously. Blinatumomab is a bispecific T cell engager that binds to the CD19 protein on leukemia and lymphoma cells and CD3 proteins on T cells to direct an immune response toward the cancerous cells. The unique targets and mechanism of action of each mAb enable a highly specific approach to cancer treatment compared with other treatments such as chemotherapy. As a result, they are often associated with fewer side effects among patients.

Antibody development on a small scale is often done without automated devices. “For the scale of culture we work with, we mainly use in vitro bioreactor flask systems,” says Elizabeth Smith, assistant director of the Core. Sterility is critical for all cell culture applications, and smaller-scale mAb production may not require highthroughput equipment. “I like the control that I have over the sterility of what I’m doing when I’m handling the liquids myself,” says Smith.

“We use a Hamilton Stem Cell EZpick robotic liquid handler for our hybridoma production,” says Dr. Moran. “The EZpick identifies individual clones, selects them from the agar, and transfers them to 96- or 384-well plates for growth and testing. The liquid handler will select supernatants from the clones and transfer them to assay plates for screening. It will also collect the hybridoma cells and put them in freezing vials for storage.” Working with an automated system has contributed to more than just increased productivity for Dr. Moran and his colleagues. “The traditional method was to test and then identify the clones through a laborious replating and retesting step. Many valuable hybridomas were lost in this process. This system is more accurate, automated, and less prone to contamination,” he notes.

While mAbs are a promising line of investigation in the search for cancer treatments, their development is not without challenges. Cell culture contamination from chemicals, bacteria, yeasts, viruses, and even cross-contamination with other cell lines can have severe consequences, including destruction of the culture and even the cell line. Practicing good aseptic techniques and implementing automated cell culture technologies can dramatically reduce the risk of contamination.

Another methodological challenge is to “make antibodies that bind to native molecules as they appear on the surface of cells,” says Dr. Moran. “Often, synthesized proteins produced to simulate the real protein are not folded the same way and antibodies made against them do not bind effectively to the ‘real protein.’” It is extremely difficult to predict if an antibody developed with a specific protein will effectively recognize the protein on the cell surface. Immunogenicity also poses challenges. Genetically engineering the antibodies to render them more human has shown some success; however, even fully human antibodies can elicit a negative immune reaction. Scalability, yield, and cost are also considerations in the development of mAbs.

Given their highly specific nature, monoclonal antibodies are promising cancer therapeutics. Their development relies heavily on cell culture techniques, which can be laborious, time-consuming, and prone to contamination. Automated cell culture technologies ensure greater accuracy and precision, reduce the risk of contamination, and alleviate scientists of tedious and time-consuming tasks.