An experimental chamber for a carbon dioxide and nitrogen experiment at the Global Change Research Wetland.
Tom Mozdzer

Earth’s carbon flows through various reservoirs, including oceans, atmosphere, plants, soil, and fossil fuel. When this carbon cycle is shifted, carbon is displaced from one reservoir to another, and disruption via anthropogenic activities drives carbon gases into the atmosphere with implications for the global climate system. Coastal wetland ecosystems are highly effective at sequestering carbon, and serve to mitigate climate change. How these ecosystems will continue to behave in the future, in the context of elevated atmospheric carbon dioxide, rising temperatures, and sea levels is unclear. Biogeochemist Patrick Megonigal, PhD, associate director for research at the Smithsonian Environmental Research Center, and director of the Global Change Research Wetland, aims to develop conceptual and mathematical models to predict the future of coastal wetlands.

Forests are well-known to mitigate anthropogenic climate change by acting as carbon sinks capable of sequestering large amounts of atmospheric carbon in biomass and soil, to slow its accumulation in the atmosphere. Similarly, oceans and coastal ecosystems are also capable of capturing atmospheric carbon (referred to as blue carbon) and burying it for centuries and even millennia. These ecosystems are referred to as blue carbon ecosystems, and encompass tidal marshes, mangrove forests, and seagrass meadows.

These lesser-known coastal ecosystems are highly effective carbon sinks—even more so than forests. “An acre of coastal wetland removes and buries carbon faster than a forest (including a tropical forest) and the carbon remains stored for a very long time,” explains Megonigal. These wetlands occupy less than one percent of the world’s oceans, but can sequester about 50 percent of the organic carbon oceans remove each year. There is growing interest in managing coastal wetlands for this purpose, “because of the big ‘bang for the buck’” says Megonigal, “that is, money spent to protect, restore, or create an acre of coastal wetland, can yield a very large greenhouse benefit if done properly,” he explains.

Nitrogen is an essential component of chlorophyll, the green photosynthetic pigment found in plants, and amino acids, and is a key determinant of plant growth. Chlorophyll content (and therefore, photosynthetic capacity) is approximately proportional to nitrogen content. Plants primarily take up inorganic forms of nitrogen (ammonium, NH4+ and nitrate, NO3), but may also acquire organic forms of nitrogen which is abundant in coastal wetland soils. The ability of these plants to acquire nitrogen from the environment is an important determinant of their growth and ability to sequester carbon.

Despite this, the observed effects of altered carbon dioxide and nitrogen levels on wetland plants is complex, as some changes are beneficial, while others are detrimental.

“For example, our work at the Smithsonian Environmental Research Center has shown that certain species of plants growing in the elevated carbon dioxide atmosphere of the year 2100 (approximately) will grow faster than they are now, and that this helps the marsh ecosystem gain elevation and keep pace with sea level rise,” explains Megonigal.

These observations are evidenced in a recent study conducted by Megonigal and his team, in which they examined the effects of elevated carbon dioxide and nitrogen addition on marsh plant morphology using data from field experiments in a tidal marsh on Chesapeake Bay. The native plant community consists mostly of the C3 sedge Schoenoplectus americanus and co-dominant C4 grasses, Spartina patens and Distichlis spicata. Results revealed a beneficial effect of elevated carbon dioxide on C3 plant Schoenoplectus americanus growth that made the individual plants smaller but more densely packed, a response that helps the marsh trap sediment in flood water, adding it to the soil surface and gaining elevation.

“On the other hand, one of the effects of elevated carbon dioxide on climate is accelerated rates of sea level rise, which our research shows will eventually cause the marsh plants to drown and the marsh to disappear. When these coastal marshes disappear from our landscapes and seascapes, the valuable ecosystem services they provide disappear with them.” 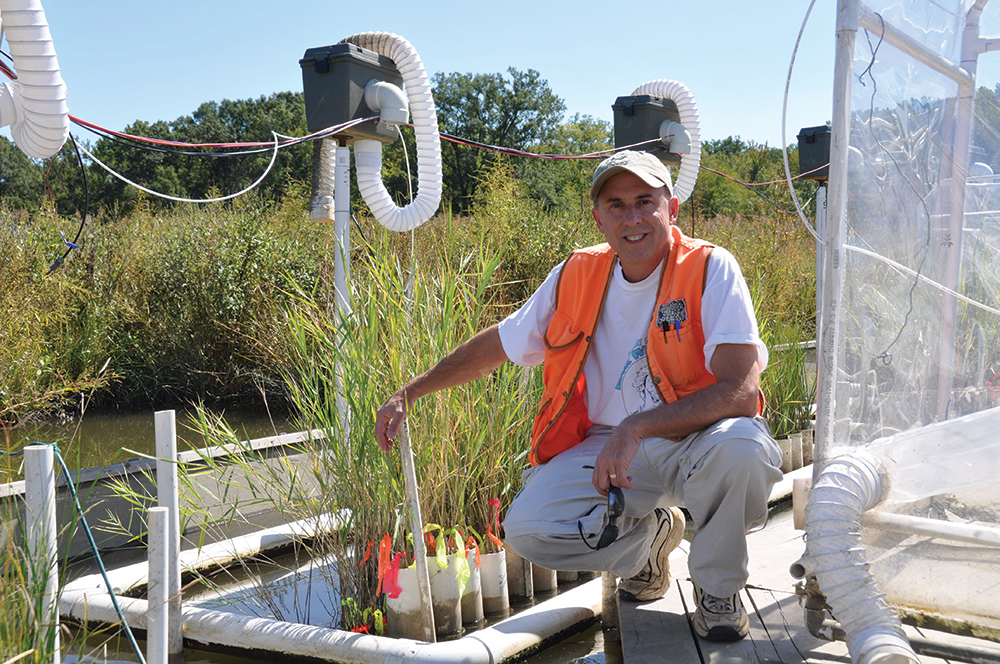 To understand how changing climate conditions will affect coastal wetlands, Megonigal and his team create experimental conditions with varying temperatures and carbon dioxide concentrations. The Global Change Research Wetland (GCREW) is a large outdoor lab with specialized infrastructure, instruments, and sensor networks required to achieve and monitor these conditions. “GCREW is an outdoor laboratory with 600 amps of power and a half-mile of boardwalks designed for daily access to our experimental chambers without damaging the sensitive marsh soils,” explains Megonigal. Currently, there are four experiments underway at the facility, designed to determine how coastal marshes are responding (and will respond) to elevated atmospheric carbon dioxide, rising temperatures and sea levels, nitrogen-rich water in the Chesapeake Bay, and invasive plant species from Europe.

“Perhaps our most sophisticated experiment requires a series of heat lamps mounted above the marsh and heating cables extended five feet into the soil, all of which are continuously monitored and controlled by computers to warm the whole marsh ecosystem at different levels above ambient ranging from 1.7°C above ambient to 5.1°C above ambient,” says Megonigal. The system also features numerous sensors for temperature, water level, wind speeds, and carbon dioxide concentrations that enable remote monitoring.

Creating this outdoor infrastructure poses some challenges. “The biggest technical challenge is designing infrastructure and sensor networks that can withstand flooding, salt water, and hydrogen sulfide, which is very corrosive,” explains Megonigal.

Analyses necessitate a combination of field and benchtop instruments. According to Megonigal, sophisticated field instruments are used to measure two important greenhouse gases: carbon dioxide and methane. “With methane, detection limits are in the parts per billion range,” he notes. Various samples are also returned to the laboratory, where carbon dioxide, methane, and nitrous oxide are measured via gas chromatography, soil and water sample anions via ion chromatography, and dissolved organic carbon in a specialized analyzer.

“We also have to be very clever about taking soil samples because these experiments are designed to operate for decades—one has been running for 33 years and is the longest global change experiment in the world,” says Megonigal.

The success of such experiments is based, in part, on reliable sensors. “The elevated carbon dioxide and warming experiments operate on custom instruments, sensors, and devices that allow us to make rapid measurements at many locations,” explains Megonigal. He believes the emergence of inexpensive computers and sensors that can be designed, built, and implemented in challenging field conditions without formal electronics training is an important technological advancement for the field. “We are now formally training our staff and students in these techniques,” says Megonigal, with hopes that the next generation of scientists will be able to obtain larger datasets and examine more sophisticated questions.

He also notes important innovations in field instrumentation have served to advance the field. Particularly, “the development of field-portable laser-based instruments for measuring trace gases and gas isotopes with high sensitivity and precision.”

Working in a unique outdoor laboratory, Megonigal and his colleagues are unraveling the processes that confer stability on coastal marshes in response to anthropogenic activity and rising atmospheric carbon dioxide. With a mix of advanced sensors, field instruments, gas and ion chromatography, they hope to gain a better understanding of what’s in store for these ecosystems in the year 2100 and beyond.