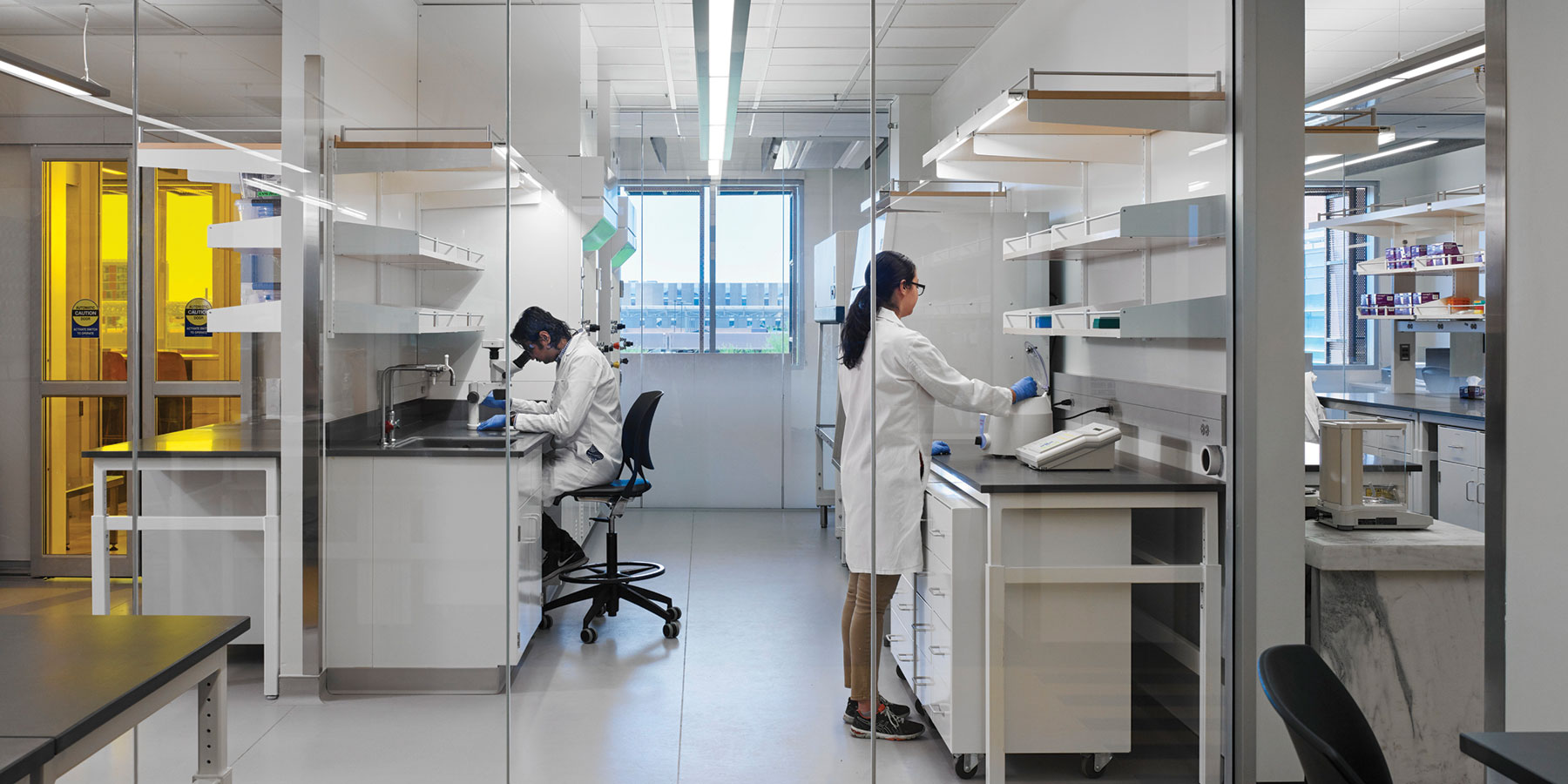 Arizona State University, home of the world's first school of sustainability and the first university-issued sustainability degree, wanted a new building to act as an eye-catching gateway to its Tempe campus. In addition to making an impressive visual statement, the facility needed to set a new standard for sustainability, as well as provide space for ever-advancing scientific research and discovery. ASU turned to architect and design firm ZGF to develop a facility that could grow with the university’s research efforts, while serving as a “living laboratory” and a role model for sustainability.

Welcome to the family

The Biodesign Institute C project faced some unique challenges from the start. The plan called for an aggressive 11-month design schedule, as well as a strict budget. The design team analyzed Biodesign Institutes A and B and concluded that the buildings’ very specialized labs did not offer much flexibility. “We went back and looked at the existing two buildings and [took] lessons learned from those two buildings—we figured out what they had and what they could really use and took advantage of that,” says Hyman. The solution for the third building was to create a space that “complimented that rather than replicated that, based on a series of goals,” says Hyman. He describes how the ultimate purpose of Biodesign Institute C was to host “workhorse laboratories” that could take on much of the biodesign complex’s general research. The priority was to develop wet labs and highly flexible, generic research spaces, and to maximize spatial efficiency while also providing opportunities for random interactions among researchers.

One of the central energy conservation measures included in the plan for Biodesign Institute C is active chilled beams, which permit decoupling of space cooling loads from the required ventilation air. The active chilled beam design utilizes both variable volume control, with occupied and unoccupied modes, and an aggressive supply air temperature reset to reduce energy at part load operation. The chilled beams are able to provide additional zone cooling with reduced primary air, which means that reheat loads typical of variable air volume systems can be reduced—especially useful in Tempe’s dry climate. The building’s mechanical systems plan also includes the use of an enhanced run-around loop (ERAL) system in the air handling units. The ERAL system reacts to the characteristics of the local climate, which results in a lower need for fossil fuel-generated heating and cooling. The system also consolidates preheat, energy recovery, and cooling coils, which reduces the length, fan horsepower, and internal static pressure drop of the supply air handling unit. During the cooling season, the system takes advantage of the low wet bulb temperature to increase the heat recovery effectiveness through exhaust air evaporative cooling, and heat recovery effectiveness is also improved by utilizing a variable flow and temperature pumping system.

The ERAL system’s indirect evaporative cooling accommodates compressor-less cooling of the outside air for several months of the year, and provides a net water savings over the use of campus chillers and associated cooling towers. The evaporative fluid cooler on the roof also provides compressor-less “free” chilled water to the active chilled beam system for about a quarter of the year. “Effectively, I’m air conditioning everything but the labs for free, because all that conditioned air gets used a second time. That has a huge impact on energy savings. If I really think about it, I’ve only air-conditioned half of every floor,” says Hyman. 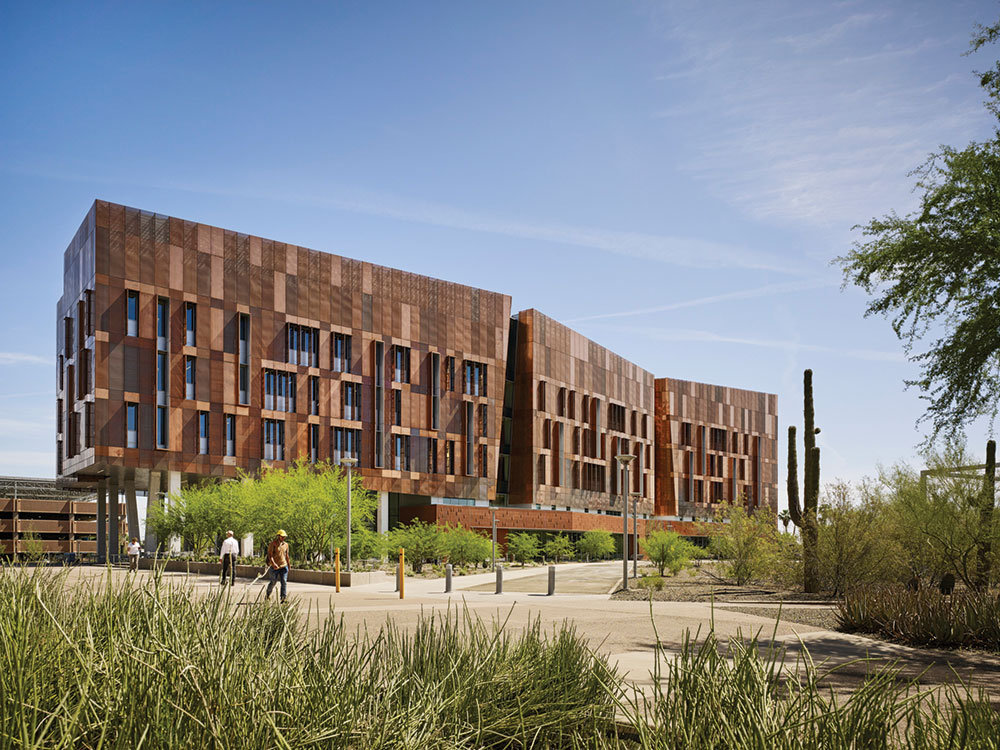 Thousands of perforated copper panels form the outer skin of an energy-efficient dual façade, while its reddish hue is a tonal tribute to campus architecture.
Nick Merrick © Hall+Merrick

Biodesign Institute C features a unique outer copper screen, which wraps around a primary skin of insulated metal panels to produce a high-performance dual façade. It is the least expensive building envelope his firm has designed, Hyman says, and the building is the most flexible and energy efficient facility that the university has ever had. The copper skin features eight different levels of perforation, made up of thousands of copper panels, which are precisely calibrated and positioned to minimize solar heat gain. There is a two-foot gap between the insulated metal panels and the copper screen, paired with openings in the screen, resulting in a ventilated cavity—this allows the air temperature between the two skins to balance against the outdoor air temperature. The screen also acts as a shading device, taking the surface temperature of the inner façade down by around 65 degrees on hot summer days; the interior surface temperature of the wall is also reduced by three degrees, a major reduction on the cooling load on perimeter spaces. “I think the single most important thing is the process and the solution as a building where everything is integrated. That skin doesn’t work without the mechanical system and vice versa. The mechanical system doesn't work without that lab layout,” says Hyman. 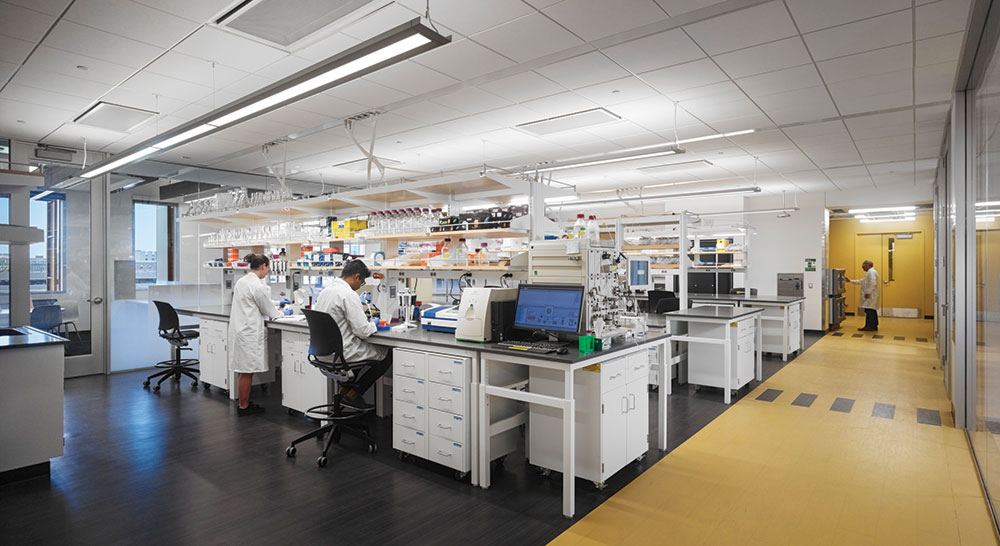 Interior factors, such as the laboratory modules, influenced the layout of the floor plans as much as external considerations.
Nick Merrick © Hall+Merrick

ASU wanted a facility that would increase worker productivity and inspire collaboration between different groups of people, and asked the project team to develop a facility that offered a variety of workspace options and the “workhorse labs.” The design team therefore decided to consult a wide variety of people, from furniture vendors to user group representatives, to determine what was needed for Biodesign Institute C. “What actually worked really great was stepping back and thinking about it as a social experiment,” says Hyman, adding that it’s an interesting challenge to figure out how to get everyone what they want and what they need at the same time—especially since the planning meetings marked the first time that many of the contributors had been in a room together. “It’s really about, how do you build a consensus of a group where their mission and goals are all interlinked?” Hyman says.

To get everyone on the same page, Hyman says, it was crucial to build a business case for sustainability. “We had a budget you could only do so much with, and at least everybody understood what the parameters were—[we had to] acknowledge the building we could get for that money.” The plan for the chilled beams, Hyman says, was something that the campus had never done before, and the university sustainability and operations representatives were understandably hesitant. Hyman arranged for the university representatives to visit other buildings that were already utilizing that system, where they could speak to lab staff and facility managers to understand what it was like. Helping people understand how the sustainable initiatives planned for Biodesign Institute C would make the building more flexible, as well as less expensive to operate, Hyman says, was a big factor in developing the final site plan.

Hyman says that one of the best parts of the Biodesign Institute C project was the chance to bring a “terrific group of people” together and share the success. “I'm always interested in helping other people not make the same mistakes and figure out ways to get to better buildings,” he says, especially in terms of sustainability. “When it’s fun to work on a project, you know you’re doing something right.”