Drug development researchers are constantly fighting battles—against disease, against the clock, and against unproductive downtime. Significant delays can occur when a research team needs to suspend its activities in order to reconfigure a laboratory facility to accommodate new progress in technology and research. Downtime in situations like this can range from six to nine months, and the cost to design, construct, and outfit a new lab can range from $50,000 to $85,000 or more. The process may need to be repeated multiple times for subsequent candidate compounds.

Pharmaceutical business Eli Lilly and Company wanted a new building for its Indianapolis campus that would be able to keep up with constant advancements in science and medical research. Lilly began a set of visioning efforts in 2013 to explore how a new development facility could spur effectiveness, as well as showcase the company’s evolving culture. The company developed a list of 10 directives to direct the plan for its new building: crossroads of innovation, transparency, volume, cultural hub, empathy, illustration, collaboration, zoning, making, and flexibility.

Better ways to work together 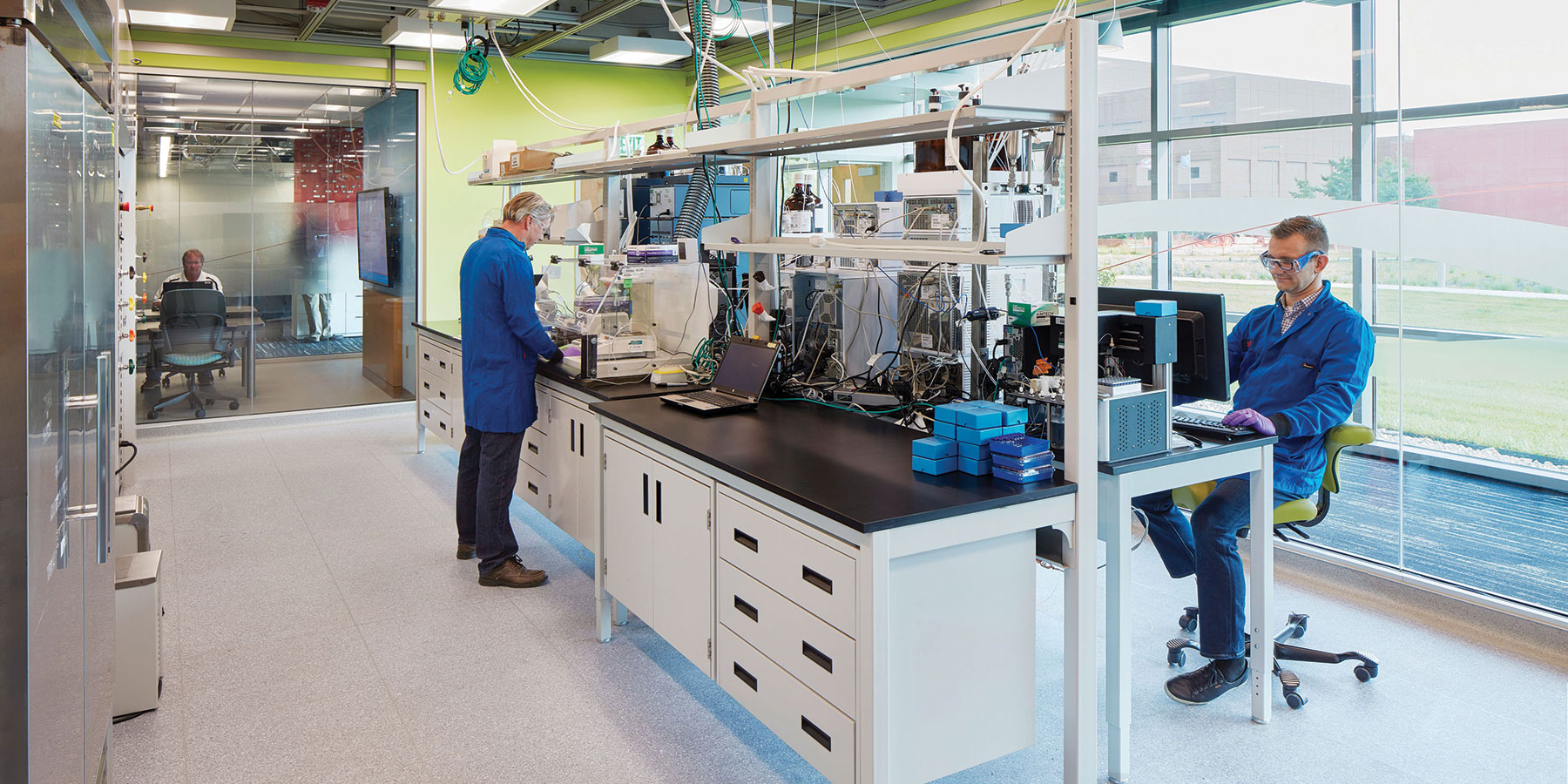 The project team behind the Innovation Development Center states that “an analysis of previous development facilities revealed that reconfiguring a total of 42 hood arrangements over a period of three years cost Lilly $2.7 million.” Another issue was that different groups within the development process were accustomed to working independently while isolated from each other. Communication was difficult, especially since individuals often had to cross the campus to find other subject matter experts if they had questions or needed guidance. There was also a feeling of specific teams “owning” their equipment, rather than a sense of camaraderie and sharing, which led to development teams duplicating equipment sets. A space that promoted collaboration and made better use of its resources was needed.

“Two core features of the integrated project delivery (IPD) process were the assembly of the complete design and construction team early in the design process and setting up a rhythm of frequent meetings with the multidisciplinary team,” says Kevin McGinnity, project manager, Flad Architects. “Planning for the new facility was done with the entire team’s input—owner, designer, and construction team—utilizing the IPD concept of the ‘Big Room,’ taking advantage of the synergies of the larger group. Owner subject matter experts were incorporated into the core team from the project start, getting their input into the design process from the outset. The team also relied heavily on the IPD toolbox, using A3s to efficiently communicate meeting information to the broader group, building detailed schedules using the Last Planner system, and resolving open issues using a structured Choosing by Advantages approach. We would highly recommend implementing the IPD process if the owner is open to it, and at a minimum, trying some of the unique approaches that have been developed as part of the IPD approach.”

The facility was built at the heart of Eli Lilly and Company’s Indianapolis Technology Campus, to fulfill its “crossroads of innovation” goal. The design of the facility allows for a number of acceleration strategies, by offering “flexible, adaptable, and visually connected workspaces” to help improve the pharmaceutical development process. The company’s goal is to drastically reduce the drug development timeframe from years to months, which requires an efficient process. Construction on the Innovation Development Center lasted from January 2016 to February 2018. The speed of scientific progress was evident over the two-year period—the labs were originally intended to accommodate heavy chemistry, continuous flow chemistry, and kilo-lab development, but the plans evolved to focus on automation, discovery, and peptide development research groups instead. Since the Innovation Development Center was specifically designed to accommodate agile laboratory reconfiguration, only minor reconfigurations, rather than costly and time-intensive renovations, were required to support the program changes. 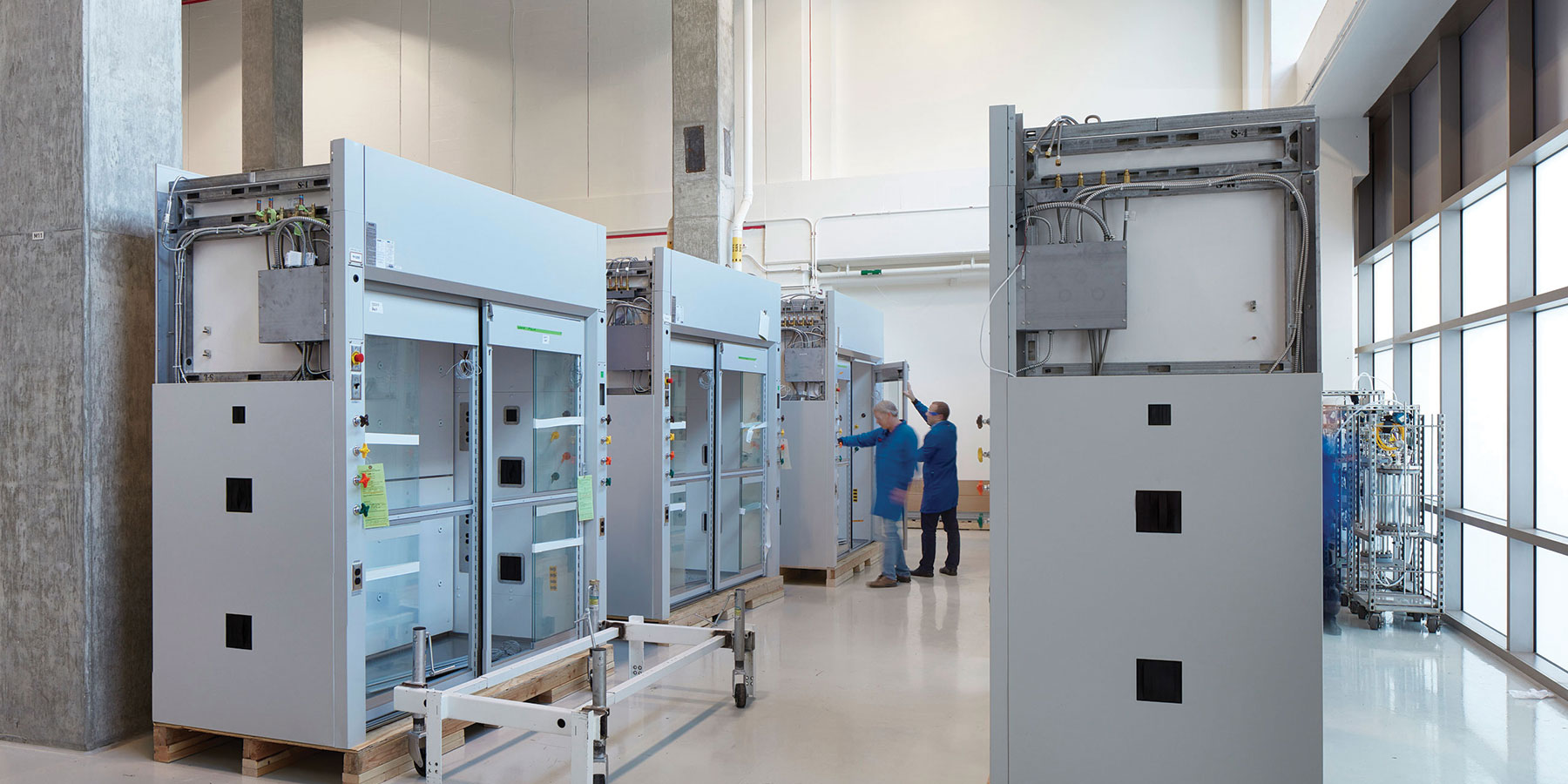 The design team applied Lean tool sets—including Target-Value Design and Choosing by Advantages, along with Lilly’s list of 10 design directives—to develop a plan that places non-lab workspace at the intersections of circulation for the lab space. The design directives “served as the design team’s ‘North Star’ and highlighted the importance and key role flexibility would have to play at the center,” says Walker. Controlled corridors connect the labs, which allow free circulation between labs and non-lab areas. Flexible labs are located in two wings on all three floors, with a high-bay pilot and scale-up space on the first level of the center. Collaboration spaces are located throughout the building. The building’s three floors are vertically joined by a stairway in the central atrium, which provides space for social gatherings and informal meetings. Additionally, controlled labs are connected vertically by a dedicated stairway, to allow for inter-laboratory circulation without having to don or doff PPE. The visual connectivity design of the Innovation Development Center allows organic chemists and engineers, along with modeling, analytical, and formulation scientists, to work alongside each other, in a “science on display” setting where visitors can view what’s going on inside the labs.

The lab incorporates an innovative adaptability design, to allow for quick reconfigurations as needed. Not only does this cut back on downtime, but it also avoids the costs involved with bringing in a laboratory architect and general contractor to design and execute the changes. Lab workers are able to get to the interstitial spaces in the ceiling above the lab, thanks to an open-grid ceiling rather than a traditional concealed setup, allowing for easy access to distribution points for ventilation and piped services. They are then able to remove the existing infrastructure, and install new hard connections to service the new lab design, and run the electrical lines to a distribution panel with rigid conduit. In order to maintain a flexible ventilation system, primary trunk lines are installed in a regular, repeated grid through all labs, and pre-installed taps mean that technicians can easily connect and disconnect hood ventilation lines in different locations. An even distribution of air flow comes courtesy of fabric duct socks, which permits maximum lab arrangement and experiment flexibility. The ceiling grid has a bus duct system, which accommodates electrical connections to be set up anywhere along the busway; this means that electricity can be routed to places where it’s needed, without hard wiring, cutting pipe, or setting up new lines to the utility distribution hub. Very large equipment sets can be set into the hoods without needing more power to be supplied or plumbed.

The Innovation Development Center utilizes a custom hood design, where the hoods are able to be quickly and easily reconfigured and moved around the facility as needed. Hoods that need to be moved (regardless of size) are cleaned, the floor pans are removed, and then the hoods are attached to a custom lift, which can be fully integrated into the hood’s construction. “Aside from space reductions, the team worked directly with Lilly’s internal subject matter experts to reduce fume hood air volume requirements,” says Walker. “Air volume and corresponding energy reductions were accomplished using fume hood sash alarms and variable air volume systems.” 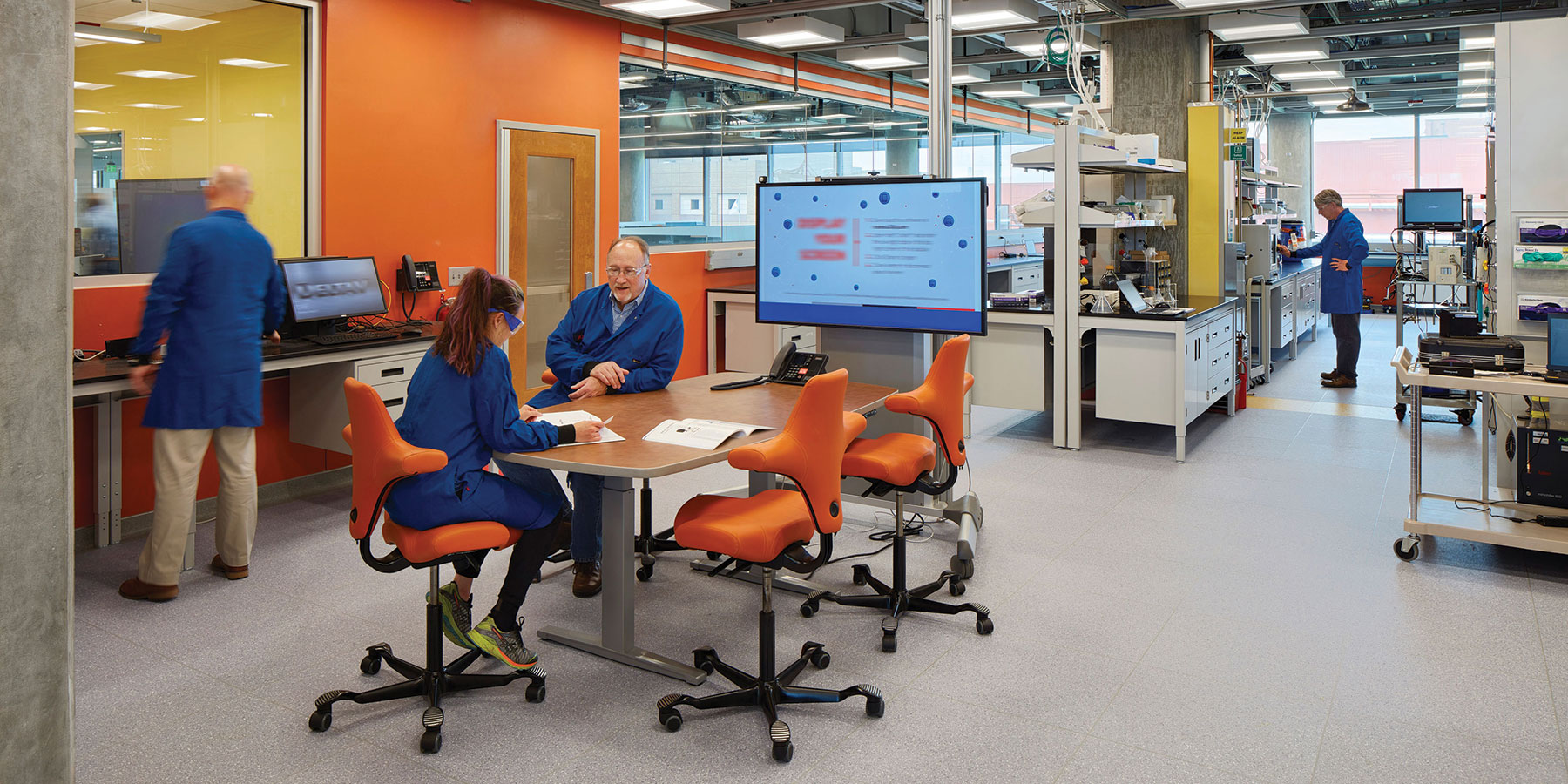 Enabling collaboration with workspaces within the labs.
Mark Herboth Photography

The “science on display” aspect of the Innovation Development Center not only showcases the research being performed in the labs, but also gives employees, students, and patients a look at the work that goes into developing drug therapies and treatments that benefit so many people. Employees who don’t work directly in the labs are able to feel that they still have an important hand in the progress, and visitors—especially young people and students—may be inspired to help tackle future health care challenges themselves. The comfort and well-being of staff is also integrated into the project design—workstations are all equipped with the same standard equipment, as well as ergonomic number adjustments to create either a sitting or standing configuration as desired. Team members are allotted personal storage spaces, further allowing them to move freely around the center to find a comfortable place to work at any given time. “The key feature we recommend to other project teams is providing spaces that address the needs of scientific teams today and the future, and not forget the well-being of the staff that supports those teams,” says Walker. “The Innovation Center incorporates multiple technical features that position it for rapid changes in pharmaceutical design and development. In addition to adaptability and flexibility, the center adapts to how a team functions, rearranges, and collaborates, while consistently providing access to natural light and views.”

“Our design and construction team came away from this project with a profound sense of pride for having delivered this important facility on schedule, under budget, and with all the scope that the owner required for success,” adds McGinnity. “We feel that we challenged the entire team to embrace the integrated project delivery method and to work outside their comfort zone. Being open to innovation in the design and construction process has encouraged most of us to look for opportunities to use these new tools on future projects.”