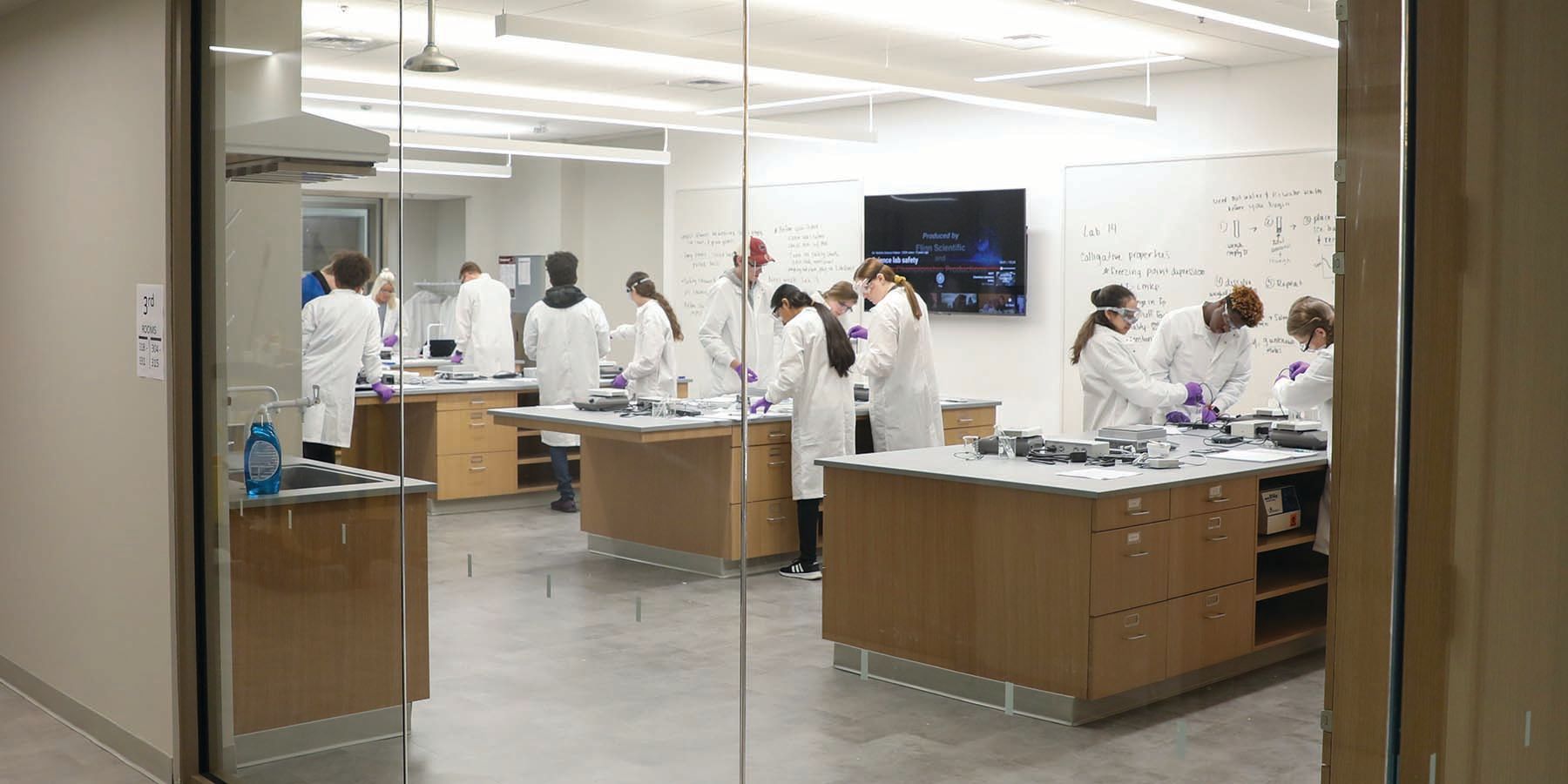 For its successful efforts in transforming an outdated law library into a vibrant, modern science building, Lab Manager has awarded EYP, the design architect/lab planner for the University of South Carolina’s Science & Technology Building, with Special Mention for Adaptive Reuse in its 2021 Lab Design Excellence Awards. EYP worked on the project in conjunction with WTS, the architect of record.

“The early analysis of the building showed good bones—excellent structural stability, tall floor-to-floor height, wide column spacing—which of course meant an overall cost savings to the university,” says Brian Tucker, AIA, NCARB, LEED AP BD+C, senior planner, higher education, associate principal with EYP. Transforming the Law Center into the new Science & Technology Building was a very sustainable decision, he adds, as well as a cost-saving move for the university because the project was already starting with an existing structure and façade.

Out with the old, in with the new 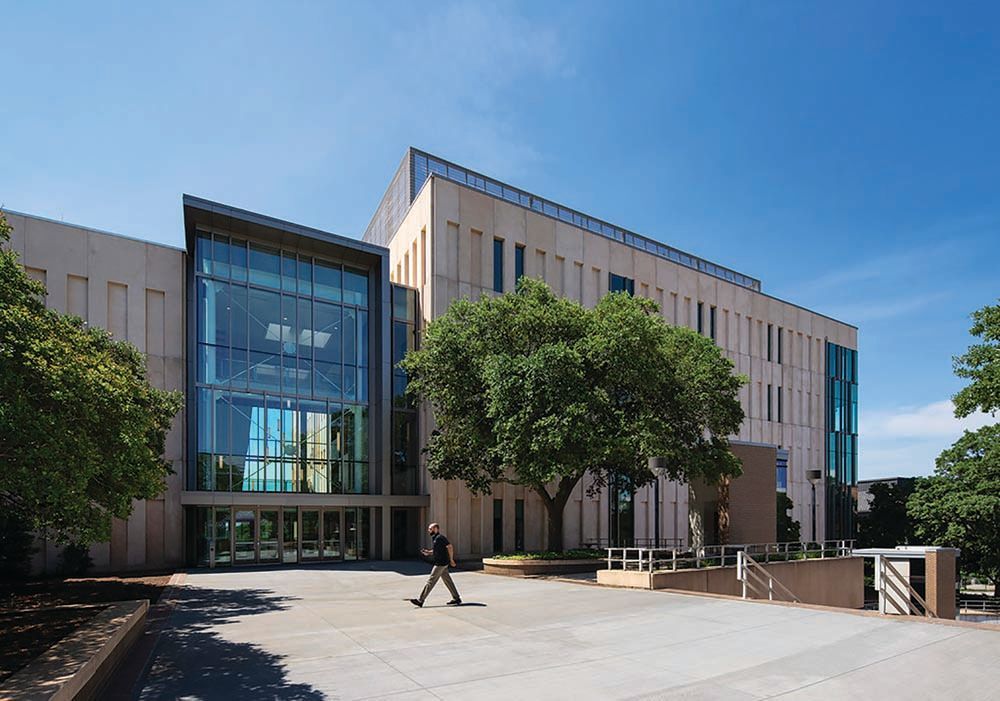 The new entrance to the Science and Technology Center at the University of South Carolina.
GARY MATSON, GMATSONPHOTO

The Law Center encompassed 192,000 gross square feet, with a classroom wing as well as a library wing that could be converted to chemistry labs. The library, EYP notes in its awards competition entry, had excellent structural stability and a floor height of 15 ft. 9 in. The project team undertook about 100,000 square feet of fit-out during the first phase of the project.

The building was completely gutted on the interior, meaning there was a lower chance of unforeseen conditions—but the project was not entirely without its challenges. The building suffered from a lack of windows, insufficient electrical power, and an obsolete heating and ventilation system. One of the most significant obstacles, says Tucker, was the presence of asbestos throughout the building: “One major item was hazardous material abatement. Almost everything you touched in the existing building was asbestos,” he says. “We couldn’t even open a ceiling tie during existing conditions surveys because they were hazardous. This represented a huge implication to the schedule and necessitated an early hazardous materials abatement package to keep the project on schedule.” 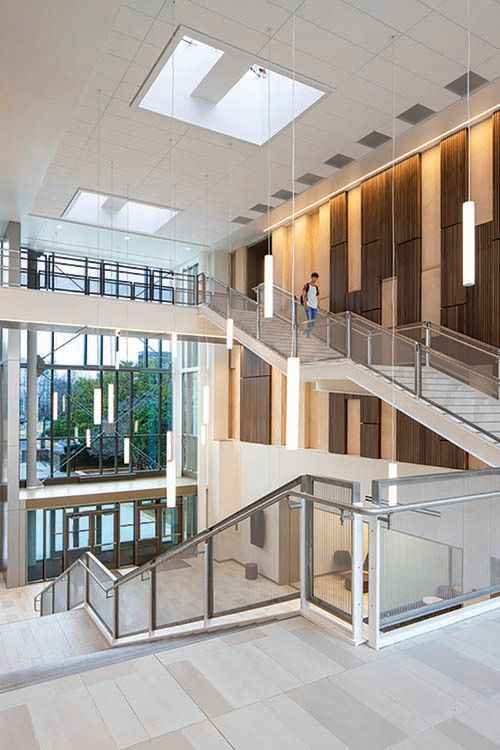 The new entrance to the Science and Technology Building at the University of South Carolina.
GARY MATSON, GMATSONPHOTO

Structural columns were spaced out in a nonstandard manner throughout the law building as well. “The existing column spacing was also another challenge as typical lab modules of 10 to 11 feet don’t divide evenly into the existing 25-foot column spacing,” says Tucker. “Through some creative lab planning layouts, columns were incorporated into walls of casework or rows of fume hoods at the sides of the lab; this approach provided a 28-foot clear lab space. There are only two visible columns in the spaces and both are located in prep labs.”

The use of an existing facility is one of the sustainable design strategies used for the Science & Technology Building. Curbing energy use is another. “I think particularly innovative to this project is the way that sustainability is integrated into the operations and management of the labs,” says Tucker. “So, for example, in general chemistry, we reduced the number of fume hoods because the department is transitioning to more green chemistry experiments in labs with intensive fume hood use like organic chemistry. We set up a process for student fume hoods to be turned off when not in use. And this is, I think, really, extremely innovative. I've never seen this approach before. It was really driven by the users of the building because they recognize that the amount of energy it takes to operate a facility like this is quite large. They were really sensitive to what they could do in their everyday use to minimize its impact on the environment.”

The exterior design of the Science & Technology Building incorporates additional openings to allow daylight and outside views into both the labs and the collaboration spaces. The law center’s existing windows were replaced with new fixed glazed aluminum windows with low-E coating, optimal U-value, and reduced solar heat gain coefficient. 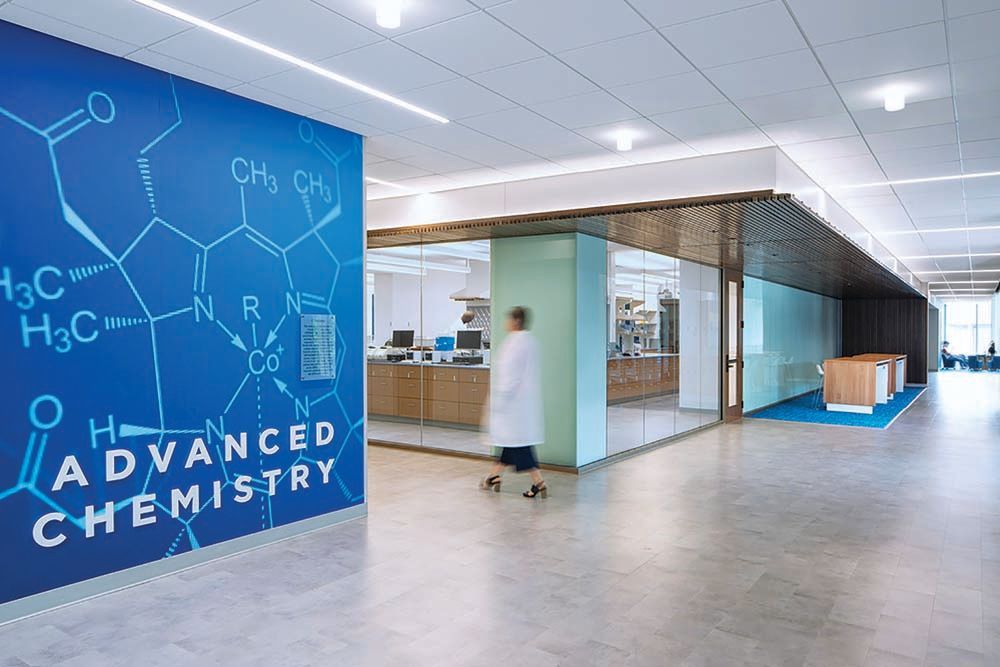 The entrance into the Advanced Chemistry Labs on level 2 of the Science and Technology Building.
GARY MATSON, GMATSONPHOTO

“The exterior façade was also another challenge,” Tucker adds. “The existing building was very much fortress-like and we wanted to add more exterior glazing to create a modern science building vision, and bring in daylight and views to create exciting spaces for students. Working with our structural engineer, we developed some creative solutions to selectively remove existing precast panels to make wider windows, and to remove large panels at the corner of the building where on each floor student study spaces were located.”

The design team situated a large lab block in the center of the floor plate to minimize the intensive, negatively-pressurized spaces found along the existing façade. The student spaces around the exterior of the building are positively-pressured, low-energy student areas, intended to eliminate potential air infiltration through the 50-year-old precast panels and joints. EYP refers to this concept as a sort of “thermal sweater” wrapped around the lab spaces, which uses newly installed thermal insulation under cladding and student collaboration areas. This “thermal sweater” traps heat to reduce energy costs and slow heat loss, which ultimately makes for a more comfortable occupant environment.

The focus on study areas, says Tucker, was very important to the users of the building. Chemistry is one of the toughest sciences, he says, and so the project team made sure to include soft seating and plenty of lounge areas where students could congregate and form study groups at any time, as the building allows key card access 24/7. “When students study together, they increase their success rate. So, it was really important to us in the design of this [building] that the student perspective be taken into account, and that we could create lots of spaces where students can leave the lab and stay and study. Or they can come back at night and have a place where they can study with their peers.” 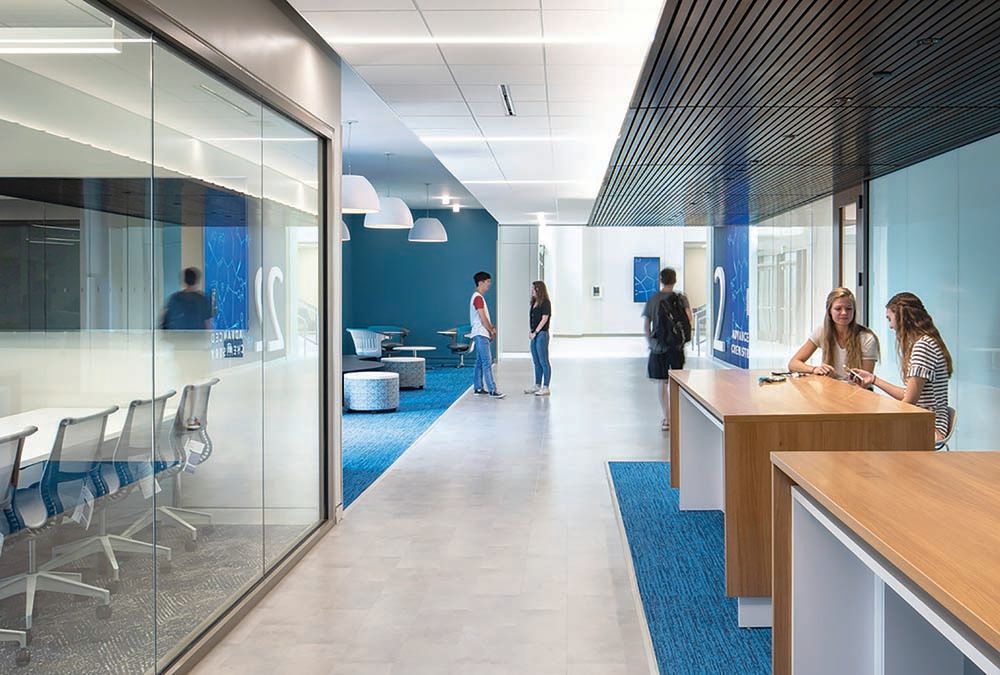 The input of those working and studying in the building, including lab managers, was sought as EYP designed the modern science building. “I would say their input during design is critical to the success of the project. Especially for this project where the lab managers are responsible for servicing, for example, eight general chemistry labs,” says Tucker. “This project sees 3,000 students a semester who are taking chemistry classes, and the labs run almost 12 hours a day. The lab managers have between 20 and 60 minutes to turn over a lab for the next class. So, this is what facilitated that deep lab block.”

The conversion of the Law Center may not have been the first strategy that came to mind for the University of South Carolina when they were looking to develop a modern science building, but it wound up being a highly successful project. “The most unlikely of buildings may have the ability to be infused with new life,” says Tucker. “We transformed a law library into modern chemistry teaching labs—I’ll admit the idea at first seemed a little far-fetched to us. I would encourage institutions that might have building stock that is past its useful life … to engage a designer or planner and explore the possibilities. We have found that many buildings from the 50s, 60s, and 70s have good bones and are ripe for creative adaptive reuse.”