Technology advances have not only facilitated clinical and operational breakthroughs, they have also enabled us to design and operate our labs more efficiently and effectively. The implications of new diagnostic instruments, for example, are not just felt by researchers and clinicians (and, of course, patients), but laboratory managers and directors also benefit from these improvements by optimizing their lab operations.

Bringing labs into the future

A dichotomy of operating most labs today is that the incredible science within these facilities is often juxtaposed by antiquated methods for figuring out where to place all of the advanced instruments, equipment, and systems. Many state-of-the-art labs still use manual drawings or even Post-It notes to conduct discussions and evaluations of alternative layout options.

Typically, a layout is proposed, and then an offline design/drawing phase follows (usually with a specially trained designer using a program such as Visio) and then the layout is returned for review and approval some time later. Revisions often require sending changes back and forth to the designer in order to generate multiple design outputs before the final design approval. This becomes an increasingly acute problem as workflows change and new instruments are acquired, as is constantly the case within labs.

Imagine a time in the future when we can quickly design any number of lab layout options on a mobile device (such as an iPad), evaluate each proposed configuration quickly and easily, and select the optimal layout to support workflow, efficiency, sustainability, safety, and cost objectives. That time is here!

Interactive software and technology have evolved rapidly in the past three to five years. Not only has it become possible to deliver highly advanced capabilities on smaller devices, but user experiences have been driven by consumer trends toward much easier-to-use interfaces. The combination of advanced software-based capabilities and intuitive user experiences now opens up the lab design and layout world to dramatic time and cost improvements.

The new process all starts with an interactive floor plan layout of the existing (or new) facility. This can be done using an iPad’s touch interface, using a simple drag-and-drop model. Walls, doors, windows, etc., can all be easily added into the floor plan, as can furniture, wash stations, and other standard lab furnishings. Instruments such as centrifuges and analytical devices can be placed on workbenches, tables, or located on the floor if they are floor-standing.

These 2D floor plans can then instantly become 3D immersive and interactive experiences at the touch of a button, allowing the user to move around them, interacting to experience workflows, access, and spatial constraints. 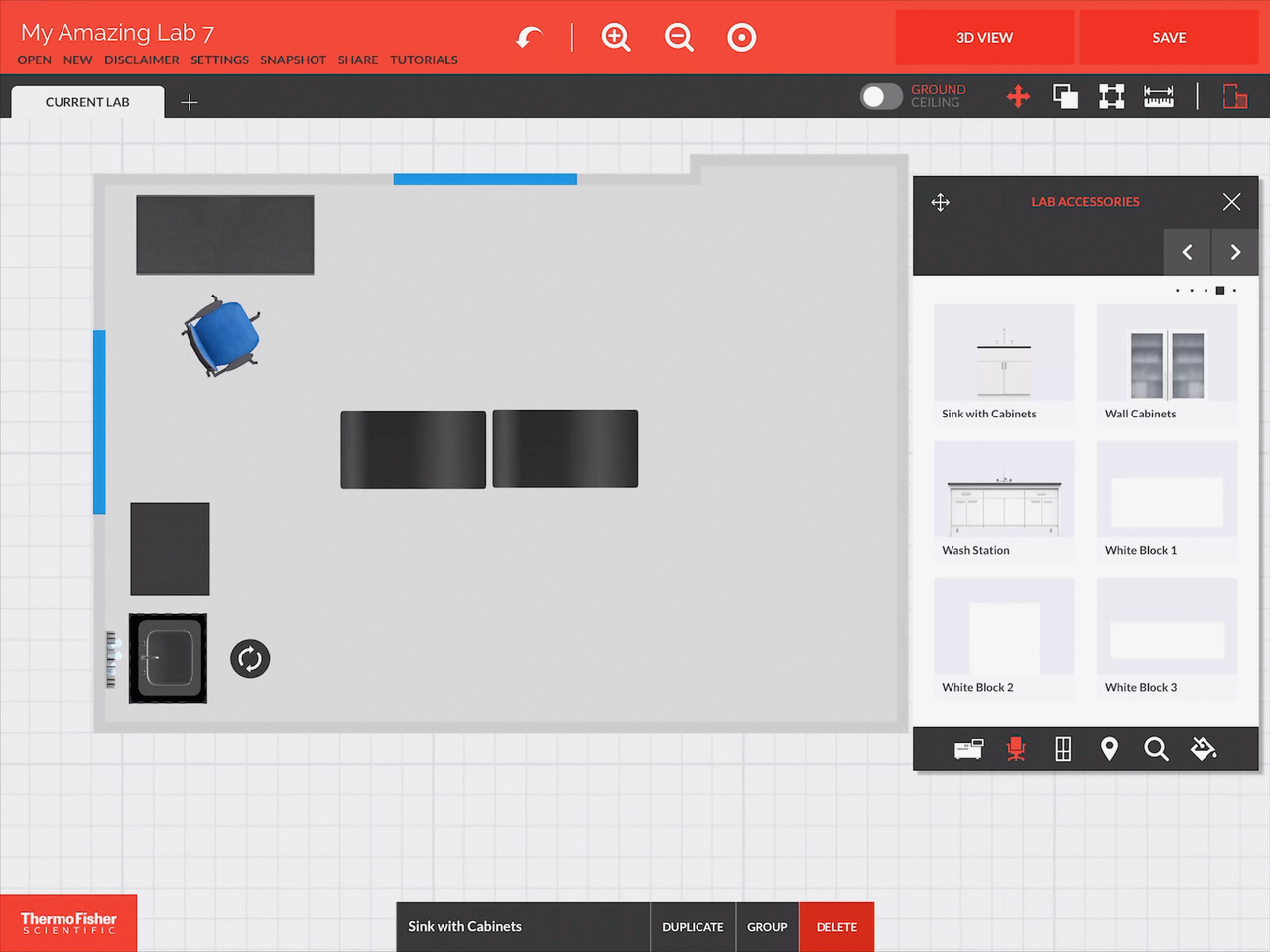 One of the major considerations in laying out the lab is the physical space, of course. "Will it all fit?" "Can we easily get to the eye wash station?" Once these kinds of questions have been addressed, there are other key issues to consider, such as designing for throughput, human workflow, science workflow, safety, etc.

Evaluating all of these disparate considerations also becomes faster when the "objects" that are placed in the virtual labs have intelligence built in, containing data about their energy consumption, footprint, sequence in workflows, etc. This makes the digital lab layout process intelligent, resulting in a much clearer understanding of the implications of each decision, and the ability to yield the very best design possible.

With the use of augmented reality (AR), lab professionals can now superimpose a computer-generated image on a user's view of the real world, thus providing a composite view of exactly how specific instruments and equipment will fit (and look) in their labs.

By using the camera on a mobile device to show the place in the lab where the instrument should be placed, and then placing a digital version of the instrument in that exact location, people can see what the future layout would look like. (The combination of viewing and interacting with real objects and digital objects at the same time and in the same space is where the term "augmented reality" comes from.)

AR can even be used to place an entire digital lab onto a table, for example, to be viewed in a smaller scale, giving the people involved a very realistic view of what the overall lab experience would be. If there is enough open physical space, AR can also be used to place the digital version of the lab to scale, allowing the lab managers and others to walk around the space showing exactly how the lab layout would be experienced. 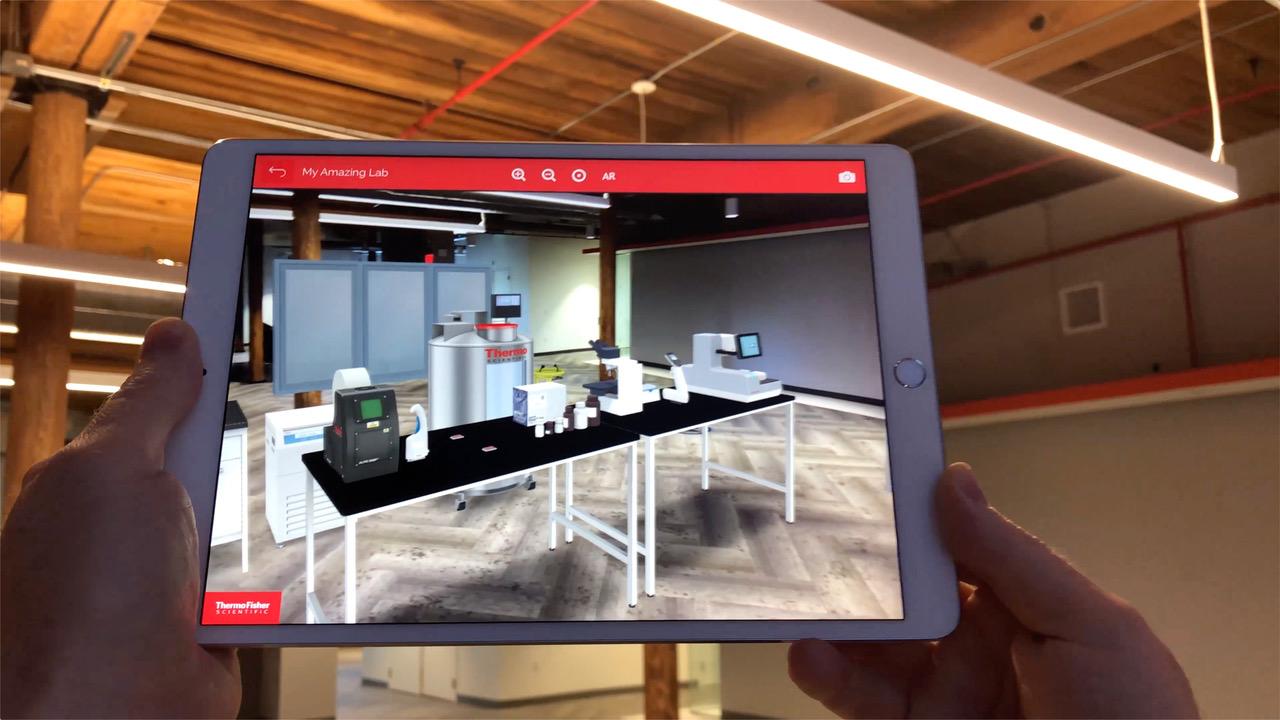 Once these digital labs have been created, they can also be experienced in fully immersive virtual reality (VR). VR is a way of viewing a virtual space without seeing any part of the real world—the user puts on special goggles (called a VR headset) that completely occlude (or block out) the person’s ability to see anything except for what is on the screens in the goggles.

These stereoscopic VR headsets give the user the feeling of full three-dimensionality and depth perception, so they get the sense that they are actually "in" the space. This can be very important for lab design, because the ability to experience the lab in advance would be particularly useful in helping to optimize workflows and identify aspects of the layout that would be problematic before actual changes or new construction were to begin. 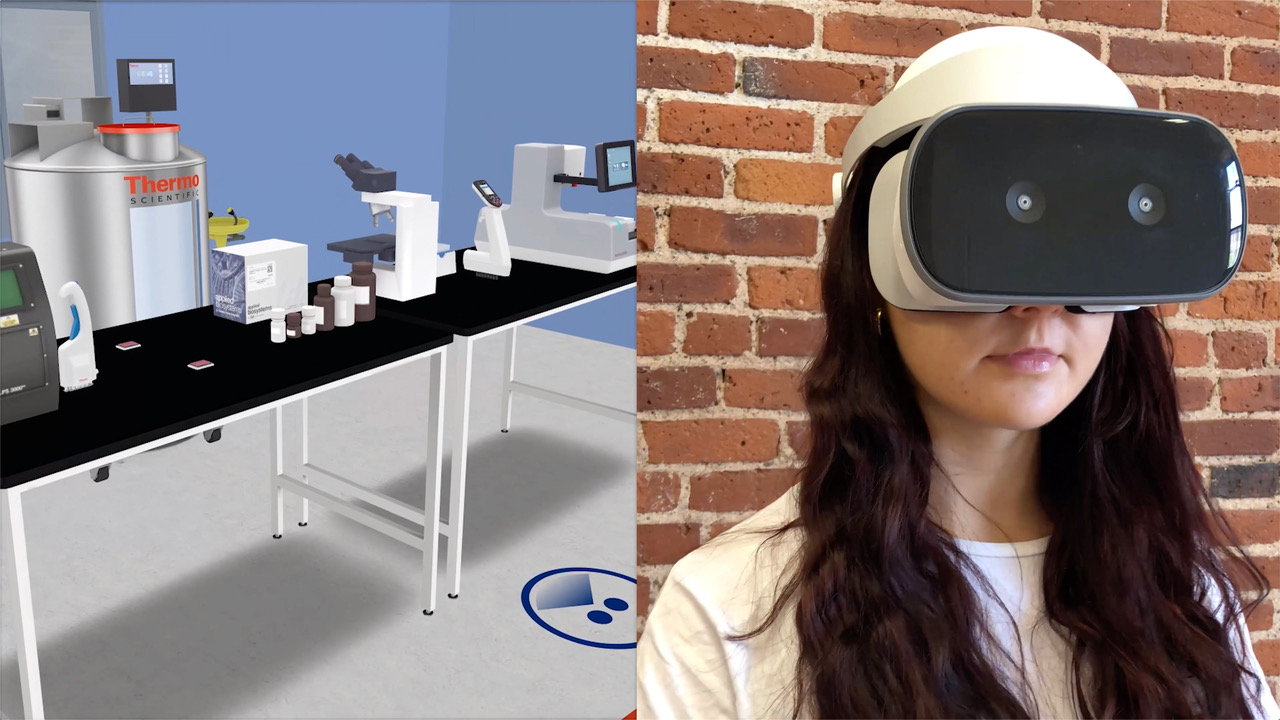 Use virtual reality to immediately immerse users into your newly designed laboratory to experience layout and workflow.CREDIT: KAON INTERACTIVE

It is no longer futuristic to imagine using immersive tools to transform how instruments are placed, spaces configured, and even entire labs laid out. With these new solutions, lab managers and directors will see shorter design and deployment cycles, better layouts, and more scalability in their labs.

Gavin Finn is CEO and president of Kaon Interactive.