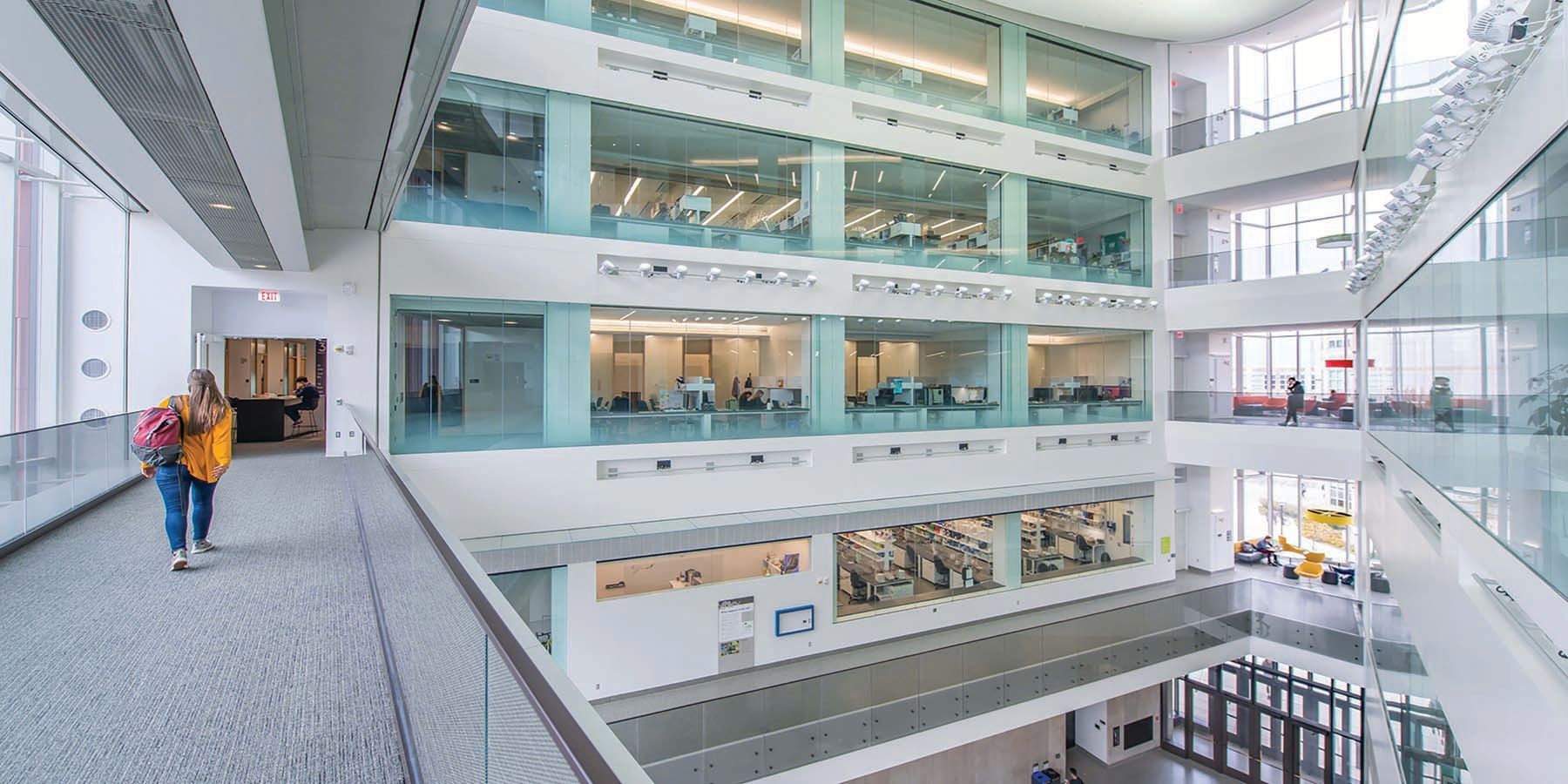 Views into the open labs from the atrium and bridge.
Aislinn Weidele

The University of Michigan has hosted a biological sciences program since the hiring of its first botany and zoology professor in 1884. The Kraus Natural Sciences Building was later built in 1915, followed by the Ruthven Museums Building in 1928. By the early twenty-first century, however, the university realized that it would be better served by a modern biological sciences building that could accommodate fast-paced research, as well as an up-to-date museum facility able to house a collection that is surpassed in size only by the Smithsonian Institution.

The resulting building—the Biological Sciences Building & Museum of Natural History—unites the University of Michigan’s biology departments under one roof, promoting interdepartmental collaboration and opportunities for researchers and the public to interact. The project broke ground in September 2015, and achieved occupancy in April 2019. At a cost of $261 million, it offers a highly visible, spacious home for the school’s natural history museum, earmarked by a magnificent mastodon display in the building’s soaring atrium.

In recognition of their success in developing a building that combines science, research, and community-building, Lab Manager has awarded SmithGroup and Ennead Architects—the architect of record and the design architect, respectively, for the Biological Sciences Building & Museum of Natural History—with the Excellence in Innovation prize in the 2021 Lab Design Excellence Awards. SmithGroup additionally served as the laboratory planner, MEP engineer, structural engineer, civil engineer, and landscape architect for the project, and Ennead also acted as the interior designer. 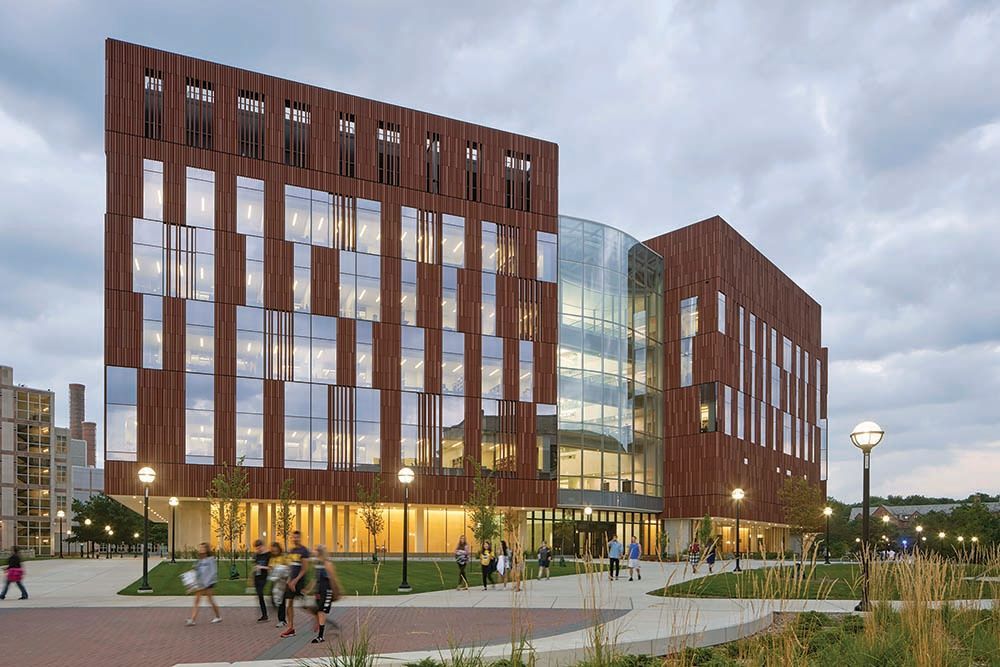 The Biological Sciences Building at dusk is a beacon for  scientific discovery.
Bruce Damonte

The purpose of the Biological Sciences Building (BSB) was to transform the way science is conducted and communicated in the twenty-first century. Susan Monroe, capital projects manager for the University of Michigan’s College of Literature, Science, and the Arts, says that the main goal of this project was to unite the school’s Molecular, Cellular, and Developmental Biology (MCDB) and Ecology and Evolutionary Biology (EEB) departments. “We wanted to bring them together with neuroscience research and with the paleontology researchers. We wanted to create a facility that would attract talented researchers and students, and allow world-class investigation to occur,” says Monroe. “We wanted a facility that would foster collaboration and interaction. And we wanted a building that would engage the broader campus and public community to showcase science and the exhibit collections in the form of a new Museum of Natural History.” 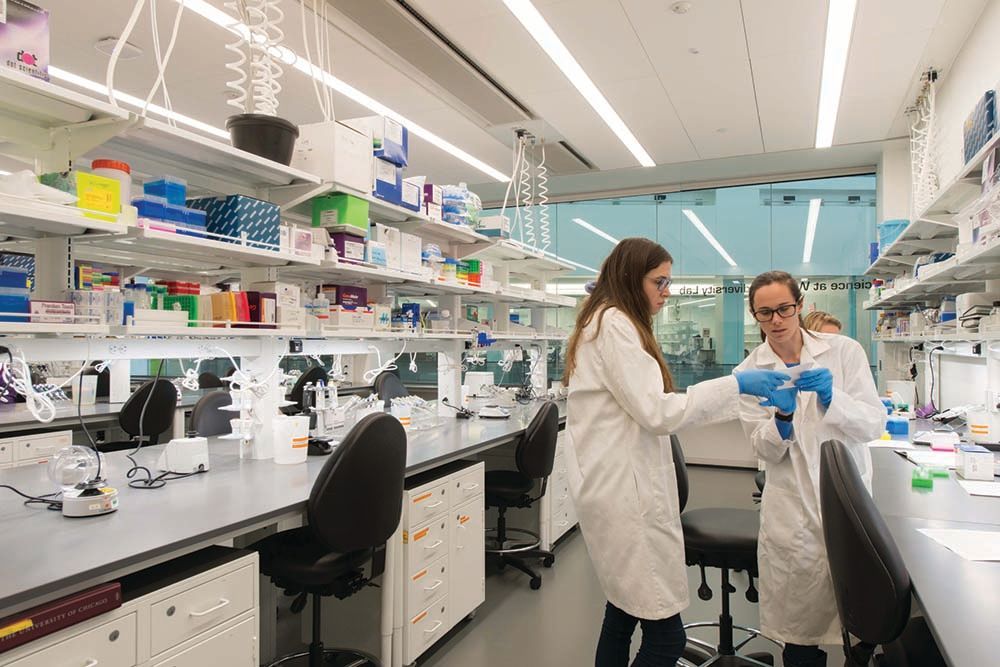 The BSB is located on the University of Michigan’s central campus in Ann Arbor, on the site where North Hall and the Museum Annex Building once stood. The BSB serves as a “beacon” for the surrounding Life Sciences Neighborhood, where it acts as a liaison between the historic academic campus core and the developing life sciences core, and then continues on to the medical center campus to the north. The ground level of the BSB contains a main entrance to the atrium, along with striking exhibits and a café, to draw in the school community. The plaza-level Science Lawn connects the surrounding Life Sciences Institute and Undergraduate Science Building, and forms an outdoor gathering area.

The project team decided to avoid the traditional design of insular blocks that appear in many other research buildings. Instead, they developed a plan that includes three articulated towers, joined by large atriums, to form a collection of research neighborhoods. These neighborhoods share certain collaborative spaces such as break rooms, conference rooms, and lounge spaces. The research neighborhoods also share open labs, flexible work spaces, lab support spaces, and core facilities such as imaging, aquatics, and plant growth. However, other amenities are spread across the three towers, encouraging research groups to travel to other neighborhoods and interact. The elevators are strategically placed in the center tower, to create an active zone of circulation. PI office space was reduced by about a third, in an effort to increase square footage for open lab and collaboration spaces. 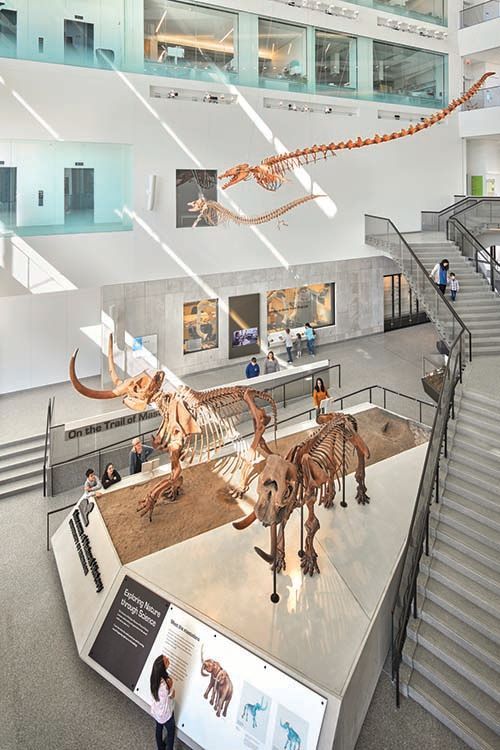 The project team utilized a social network mapping survey to document existing research collaboration, as well as desired future research collaboration, to understand the depth of connection between building users and develop the best possible collaborative infrastructure. The planning team identified 21 themes/sciences that could be co-located in areas by neighborhood. This included 19 wet lab neighborhoods and two computational neighborhoods, based upon compatible sciences but not necessarily different departments.

“I think one of the fantastic formal recognitions that the team came to...is that this program could not be represented monolithically; that it would not lend itself to the superblock notion of the laboratory. The analysis showed some fairly discrete neighborhoods that could be developed, and really begin to organize into research neighborhoods,” says David Johnson, design and lab liaison, SmithGroup. “[It allows] people to recognize how engaging and charismatic science is, in that laboratories like fossil prep really become inside-out opportunities to engage the user community and to engage the public in the mission of science at the University of Michigan.”

The university’s Museum of Natural History was previously housed in the Ruthven Building, but was “relatively unknown,” says Jarrett Pelletier, project designer, Ennead. “You'd have to know it was there; you didn't walk by it and see the museum, you had to sort of uncover it. While it was beloved, in its previous location it was hard to spot. The museum wanted to turn that around on its head and really make it a centerpiece for the design of the biological buildings and really celebrate those two interactions,” he says.

The museum is co-located on three floors of the BSB alongside research programs, “so there's a sort of overlap. We chose to maximize all of the contact areas as much as we could in the design of the museum space, to encourage collaboration and chance encounters and really leverage the proximity of those two programs,” says Pelletier. According to SmithGroup and Ennead, museum memberships have tripled since the museum was relocated to the BSB.

Inspired by the sciences

The university’s natural sciences program was an influence on the design of the BSB, as well as its energy-efficient strategy. Natural systems, native landscape, and stormwater management strategies are utilized to form an immersive environment surrounding the building. The labs embrace natural light to overcome the stereotype of the lab as a dark, dingy place. The labs are also designed to be free of barriers, to promote the well-being of the occupants, and to develop a sense of community via shared bench space. Holistic ventilation has resulted in lower energy costs, and also means increased occupant ventilation and enhanced indoor air quality. The BSB has received LEED Gold Certification. 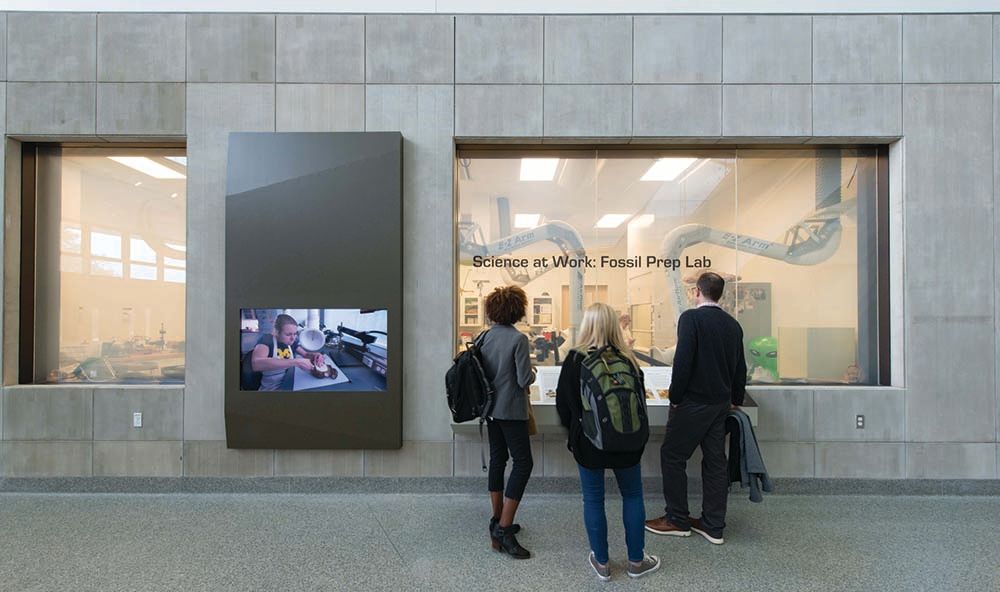 “We did a lot of things to reduce energy usage while supporting the health and safety of everyone in the building. The systems design really takes advantage of transferring and utilizing energy efficiently at every stage of the building operation through some key design decisions and strategies,” says Jeff Hausman, principal in charge, SmithGroup. “First, makeup areas are pre-heated with waste heat from the process cooling water loop, then the amount of air needed is reduced by the use of low-velocity chilled beams. Then, outside air is used to cool the highly utilized spaces, such as classrooms, offices, and the graduate student spaces, and then transferred to the labs as makeup air. Finally, the non-exhausted air is used to ventilate the linear equipment rooms. We are wringing every bit of energy out of the airside system to make the overall building as efficient as possible for an intensely used lab building. The energy use intensity for the building is actually below 100 kBTU per square foot, which is 70 percent better than a benchmark lab building from 2003, and met the AIA 2030 challenge when the building opened. The building is 30 percent more efficient than any code building is today.”

Safety initiatives in the BSB include shared yet separate storage areas for chemicals and biologicals jointly used among research neighborhoods; fume hoods (including shared radioisotope fume hoods) that are housed in alcoves apart from human circulation; and the location of biosafety cabinets in lab support spaces, apart from general circulation areas. Each neighborhood in the BSB is outfitted with lab sinks, eye wash stations, and emergency showers. Desks are located away from open labs to reduce exposure. Passenger elevators and circulation areas are situated near faculty offices to avoid the laboratories, and separate service elevators accommodate the transport of chemicals, biologicals, and research specimens from the loading docks to the labs.

“We think the building is really poised to help elevate science education in the future, and future generations,” says Pelletier. “And we think that's a great aspect about bringing all these programs together.”