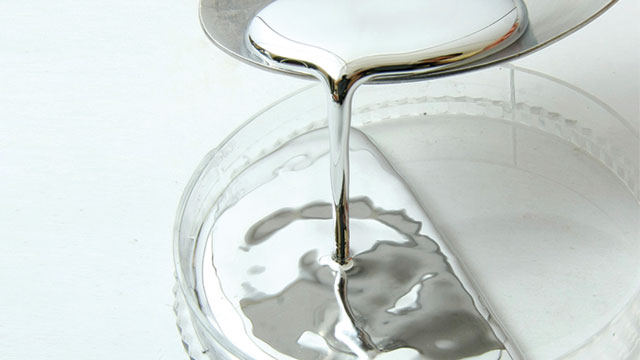 Elemental and mercury compounds and their associated health risks

We are talking about the 80th element of the chemical periodic table. Mercury—aka quicksilver—the one with the symbol Hg and atomic weight of 200. Turns out this stuff takes many forms and can be hazardous to your health. We are going to look at the three different forms (elemental, organic compounds, and inorganic compounds), their properties, hazards, and symptoms of exposure. Then we’ll turn to safe handling, providing tips on everything from managing waste to cleaning up spills.

The most common form encountered in the lab is elemental mercury, found in thermometers, barometers, manometers, and sphygmomanometers, to name a few instruments inhabiting laboratories. But you may have noticed fewer of these recently, as the potential hazards have led to the phasing out of mercury thermometers and sphygmomanometers, especially in healthcare and clinical settings, for the more friendly alternatives such as alcohol-filled thermometers and solid-state or infrared electronic instruments. In addition,—and you might want to pass this article to your facility managers, physical plant personnel, and maintenance workers—mercury is found in batteries, float valves, mercury switches and relays, and fluorescent lamps, among other building items.

Inorganic mercury compounds are formed when mercury combines with elements such as chlorine, sulfur, or oxygen. In the past, these compounds were found in laxatives and latex paints. However, EPA canceled registration for mercury in interior paints in 1990 and this use was discontinued in 1991.1 In addition, most agricultural and pharmaceutical uses have also been discontinued in the United States. One exception is mercuric chloride, which is still used in disinfectants and some pesticides.

Organic mercury compounds have little industrial value and few uses but are the most toxic, as we will see. They are usually classed with the generic term “methylmercury” and form primarily in nature through a metabolic process called biomethylation. Organomercury compounds most often present as environmental pollution from contaminated fish or polluted waters, but may also be used in chemical and research laboratories.

Elemental (metallic) mercury is the most common form encountered in labs and typical work environments. It is a silvery, odorless liquid at normal temperatures and a major source of occupational exposures, primarily from inhalation of vapors following a spill or inadequate cleanup of one. Acute (short-term) exposure affects the central nervous system (CNS), producing tremors, mood changes and reduced cognitive, sensory, and motor nerve functions. The kidneys are also affected, with renal failure at extremely high doses. Chronic (long-term) low-level exposure can cause the same CNS effects with increased irritability, insomnia, memory loss, and headaches. The kidneys are also affected, leading to development of proteinuria.2

Exposure to inorganic mercury compounds occurs usually through ingestion, with some potential for dermal absorption. Acute exposure causes a metallic taste in the mouth and leads to nausea, vomiting, and severe abdominal pain. As little as 1 to 4 grams can be lethal for the average 150-pound person. For chronic exposure to these compounds, the major effect is kidney damage, similar to that produced by metallic mercury vapors.

Organic mercury compounds can produce severe effects. Exposure occurs primarily from both inhalation and ingestion, but dermal absorption is also possible. Acute inhalation exposure is rare, but leads to major CNS effects such as blindness, deafness, and impaired consciousness. Oral ingestion produces severe reproductive and developmental effects such as mental retardation, ataxia, blindness, and cerebral palsy. Chronic inhalation or ingestion damages the central nervous system with the earliest symptoms showing as blurred vision, malaise, and speech difficulties. Dermal exposure can be very dangerous as it is easy to receive toxic doses. Low levels produce all the symptoms above, but a high dose (as little as 200 mg) can lead to death.3 Recall the Dartmouth researcher who tragically received a fatal dose through protective gloves (albeit the wrong type).4

Knowing the facts, we can see that mercury and its associated hazards are serious business. Although OSHA does not have a specific standard covering its use in the workplace, there are established permissible exposure limits for mercury compounds. These are contained in the air contaminates table (29CFR1910.1000, Table Z-2).5 If any mercury compound is used in your workplace, an exposure assessment and hazard evaluation is required for those employees handling the material. The OSHA permissible exposure limit is 0.01 mg/M3 as an 8-hour time-weighted average for organic (alkyl) mercury compounds with a ceiling of 0.1 mg/M3 for all other mercury-containing materials. A ceiling limit is an exposure limit that must not be exceeded during any part of the workday. The graphic below contains additional recommended exposure limits and health limits from other agencies and professional groups. LOAEL refers to the lowest observable adverse effect level and RfC is the reference concentration most likely to result in no observable adverse effects as a lifetime risk.

As far as handling mercury compounds, if you are not performing specialized research with an organic mercury compound, the most probable exposures will be from dealing with metallic mercury cleanups from accidental spills or broken equipment (thermometers, switches, etc.). If you are working with the methylmercury compounds, then you must have those employees thoroughly review and understand the safety data sheets. Develop and follow detailed safety protocols and standard operating procedures (SOPs). Perform all work in a fume hood and ensure that employees are using the right personal protective equipment. Finally, have a qualified industrial hygienist review the SOPs and conduct the exposure assessments.

A few final words on mercury spill cleanups are in order, as spills are the most likely scenario where mercury would be encountered. First, secure the area and prevent any unnecessary foot traffic. Use a mercury-binding sulfur powder (or commercially prepared mix) to dust the entire area where droplets are visible. A special mercury vacuum is needed to vacuum up the dust and free mercury. If the spill was onto carpet or a porous material, those should be removed and disposed of (as hazardous waste) after vacuuming. Impervious surfaces should be dusted and vacuumed at least three times. Once you are reasonably sure all mercury has been collected and removed, have a qualified industrial hygienist conduct a clearance assessment, which should include air sampling for vapors. Once clearance testing passes, the area is ready for re-occupancy.

Mercury in Fish, Seafood May Be Linked to Higher Risk of ALS

Mercury in Fish, Seafood May Be Linked to Higher Risk of ALS