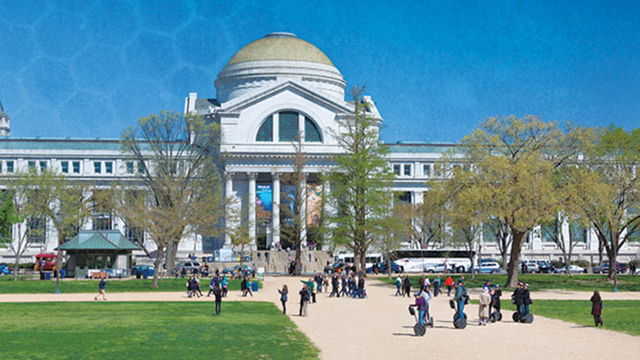 Receiving millions of visitors each year, the Smithsonian Museum of Natural History is one of the most popular museums in the world. Located on the National Mall in Washington DC, the museum stands out among the many other tourist attractions in the area. Visitors can meander through multiple levels of exhibits, from the first floor Sant Ocean Hall, up to the second floor to learn about life in Ancient Egypt, or be dazzled by the Hall of Geology, Gems, and Minerals. Each area of the museum educates visitors on how life on Earth adapted, survived, and even thrived over the course of millions of years, through to present day. While you could certainly spend hours or days experiencing everything the museum has to offer, there’s even more interesting work going on behind the scenes.

There are nearly 500 scientists affiliated with the Smithsonian Museum of Natural History who conduct research in the on-site laboratories, at the nearby Museum Support Center (MSC), or at field sites across the globe. The museum’s research is divided into seven departments—anthropology, botany, entomology, invertebrate zoology, mineral sciences, paleobiology, and vertebrate zoology. A collection of approximately 145 million specimens and artifacts is cared for by the museum, and despite the age of some of the samples, researchers are still revealing new information from them that can be shared to the public, as well as help us anticipate the future of life on Earth. About 40 percent of the collection’s items are stored at the MSC, located in Suitland, MD. Samples range from 4.56-billion-year- old iron meteorites, to a 44-foot-long totem pole, to microscopic organisms. As one of the first such facilities in the world, the MSC was designed to address the needs of collections storage, conservation, and research for the Smithsonian. The MSC includes the Biorepository, the Laboratories of Analytical Biology (LAB), the Smithsonian’s Museum Conservation Institute, as well as collections storage and office spaces.

Lab Manager toured these facilities to get a better understanding of how the labs function, and the unique challenges associated with studying and preserving such diverse, sensitive samples.

The MSC recently installed a BioBubble soft-wall cleanroom space where ancient DNA samples extracted from bones and plants are first analyzed. The sterile environment is essential to prevent any contamination of these sensitive samples. HEPA filters purify air entering the room, and the research staff periodically sanitizes the space with bleach and applications of ultraviolet lights. MSC is also home to the Biorepository, which was established in 2011. It has the capacity to store more than four million 2-milliliter cryotubes containing tissue or DNA from any type of sample you can think of—from ocean organisms to forest foliage. Storage temperatures range from -30 C to -190 C within mechanical and liquid nitrogen freezers. There is also an extraction room for DNA isolation and Sanger sequencing technology, and a designated “meteorite room” where a 3,000-gallon liquid nitrogen tank provides nitrogen gas for the museum’s meteorite samples.

On-site at the Smithsonian Museum of Natural History complex is an SEM microscopy lab, and about 20,000 square feet of space for the LAB department, including a 9,000-square-foot post-PCR and general lab workspace. The LAB is the biotechnology core of the museum’s molecular research programs. Researchers within this group can conduct genomic or genetic research in the multiple LAB spaces. “The expertise of our scientists has helped the Exhibit Department in developing exhibits such as ‘Genome’ and ‘Outbreak,’ as well as developing protocols and activities for our educational outreach center, Q?rius,” explains Jeffrey Hunt, LAB manager.

It is difficult to envision the sheer quantity and diversity of the samples that the LAB researchers have at their disposal to study. Hunt notes that the variety of projects going on at a given time is one of his favorite aspects of working at the LAB, but it also presents unique challenges. “The biggest challenge we face is making commercially-available products work for our samples. Most products are designed to work with model organisms and we typically break that model with the wide variety of organisms the researchers in the lab work on,” Hunt explains. “Our researchers have become very good at adapting protocols to work with their organisms.” As an example, Hunt referenced how many researchers have found ways to work with marine invertebrates, which present numerous obstacles during DNA extraction that aren’t typically present when working on vertebrate species.

The Smithsonian Museum of Natural History has collaborations and partnerships with institutions all across the globe. One example of an ongoing collaborative research project is the Deep Reef Observation Project (DROP), which was initiated by two Smithsonian scientists in 2011. Thanks to a partnership with an owner of a submersible vessel on the island of Curaçao in the Caribbean, researchers are making new discoveries about deep ocean reefs, located far beyond scuba diving depths, and can monitor changes to the environment over time.

Related Article: Discovering the Role of Microbes in Ocean Life

Shallow ocean coral reefs have become a topic of growing concern due to coral bleaching and a warming climate, but deep ocean reef ecosystems have historically been understudied. “This submersible is unique because it is equipped with specimen collecting tools, allowing the scientists to collect fish and other organisms at a depth ranging from 30m to 300m,” explains Hunt. Since 2011, more than 100 fish species have been collected from this area in the Caribbean, about 25 percent of which are new to science. Every specimen collected is photographed and processed for genetic analysis by the LAB team at the Smithsonian, and tissue samples are deposited at the Biorepository.

Soon after the launch of DROP, the team began using Autonomous Reef Monitoring Structures (ARMS) to further their discoveries. Previously, ARMS were being used at various sites around the world in an effort to monitor marine diversity in shallower waters, so it was a natural fit to expand their use and deploy them through DROP. ARMS are made up of nine stacked plates, with a spacer dividing each level to allow marine organisms to colonize and live on the plates, reminiscent to the structure of condo or hotel buildings. “After a set amount of time, the structures are retrieved and the organisms are collected and cataloged,” says Hunt. “The encrusting organisms on the plates will be scraped off to extract their DNA where we will use next-generation sequencers to determine all the species that colonized the ARMS.” The ARMS structures have been deployed in the Caribbean since 2012, and researchers are developing a multi-year comparative dataset on temperature and biological changes on the vertical reef profile. 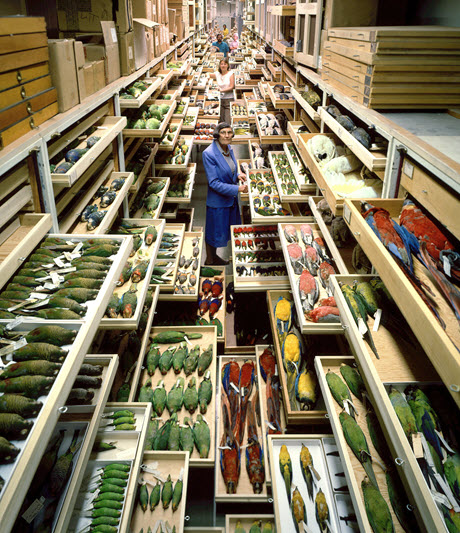 Roxie Laybourne, founder of the SI Feather ID Lab, seen in one aisle of the SI Division of Birds specimen collection. This collection, with more than 625,000 specimens, is the third largest bird collection in the world.Credit: Chip Clark, SmithsonianAnother long-term research program at the Smithsonian, referred to as the Bird Strike Project, identifies bird species involved in bird-aircraft collisions. When these incidents occur, the FAA, US Navy, or US Air Force will send samples to Smithsonian researchers for processing. The Smithsonian’s Feather Identification Lab can then ID the type of bird that was hit. Knowing the species of bird involved reveals insight into its behavior, its migratory routes, and other key pieces of information that can be used to develop preventive measures to avoid similar outcomes in the future.

During migration periods, hundreds of birds may be hit by planes in a single week. In 2009, US Airways Flight 1549 was a key example of the potential dangers bird strikes can cause. The pilots of the aircraft were forced to land in the Hudson River near Manhattan, NY after the plane struck a flock of Canada geese shortly after take-off.

Depending on the condition of the remains of the bird sent to the Feather Identification Lab, researchers will either compare physical characteristics to bird specimens in the Smithsonian Museum collection, or may need to use more complex measures such as microscopic analysis or DNA analysis. Prior to the infamous US Air Flight 1549 landing, only about 20 percent of bird strikes were reported. Since then, reports have greatly increased, leading to more identifications and baseline data that can help build avoidance programs and habitat management near airfields. Through this project, researchers have also been able to build a reference library for every known bird species in North America—about 800 in total. They did this by “barcoding” each species, or taking a fragment of DNA, that can be used to match samples from bird strikes that have minimal material for identification.

Just like the exhibits on display at the Smithsonian Museum of Natural History, work in the labs is constantly evolving. Over the years, the facilities at both the MSC and at the museum have expanded, undergone renovations, and acquired new, innovative equipment, and this will continue to be the case in the future. In the short-term, one of Hunt’s primary goals is to further develop protocols and services for working on environmental DNA, metagenomics, and their associated bioinformation services.

If you have the opportunity to visit a Smithsonian Museum, take some time to engage with the expert staff and appreciate the cutting-edge research being done out of public sight in the laboratories.