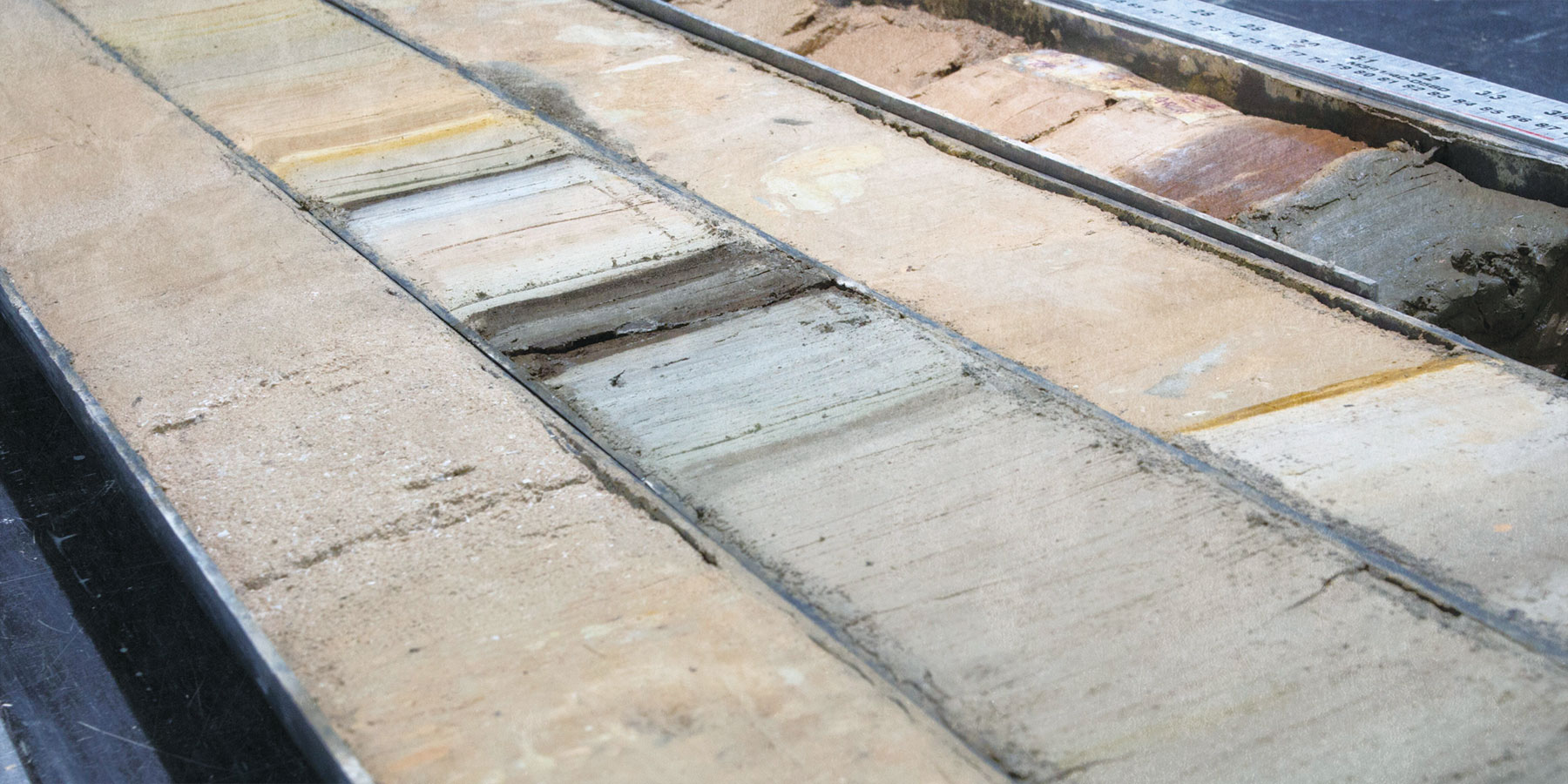 A core from the Mediterranean.
The Lamont-Doherty Core Repository

What came first, the observatory or the repository?

When it comes to the Lamont-Doherty Earth Observatory (LDEO), the answer is the Core Repository it houses. The repository was established one year before the observatory’s official founding in 1949 at Columbia University’s Earth Institute in Palisades, NY. “Our founder, Dr. Maurice Ewing, started using this campus in 1948 because he became so obsessed with coring the seafloor,” explains Nichole Anest, the repository’s curator. “He was going out on ships that belonged to other universities but he needed a place to store all his samples.”

A sedimentology class in the repository.
The Lamont-Doherty Core Repository

The sediment lab at the LDEO Core Repository.
THE LAMONT-DOHERTY CORE REPOSITORY

Occupying roughly 12,000 square feet of the basement level of the LDEO’s Geoscience Building and the first floor of the Core Laboratory, the repository isn’t just a place to store thousands of ocean and terrestrial cores, along with coral and dredge samples. It also includes two analytical labs, one of which employs two core scanners, allowing split cores to be analyzed by x-ray fluorescence (XRF). The labs can do x-rays and basic physical properties like wet bulk density, and P-wave velocity as well, Anest says. “[These are] things that’ll help you just get an idea of what’s in the sediment before you start actually physically sampling it,” she explains.

Samples by the numbers:

The repository also includes a sediment processing lab where they can do everything from washing or sieving the sediment samples to carbonate and grain size analysis. That lab includes a benchtop x-ray diffraction analyzer that Anest says is similar to the XRF core scanner, but works with very small amounts of sample. They also offer field equipment to researchers going out on ships to sample the seafloor. The first cores stored in the repository were taken in the 1930s, but the oldest sediment in the collection is 130 million years old. “Our oldest core was taken on our first ship, the Vema, in one of her later cruises a couple hundred miles east of the Bahamas,” Anest says.

The repository doesn’t perform its own research but supports Earth scientists and educates the public about the latest science. “We’re strictly like a lending library,” Anest explains. However, she adds that she’s a co-principal investigator on a proposal that went out the week of Jan. 24 to look for microplastics in some of the repository’s samples from higher sedimentation rate areas. “We’re hoping to be able to figure out how quickly microplastics settle to the ocean floor, and if we can see them, how long ago the first ones started appearing at the bottom of the ocean,” she says. 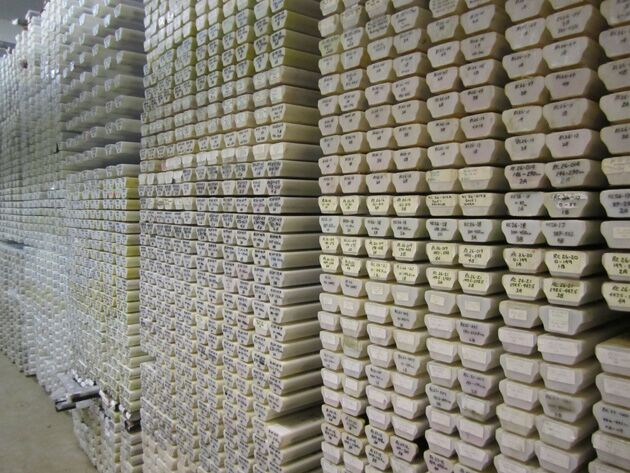 The refrigerated storage locker in the Core Repository, kept at 40°F.
THE LAMONT-DOHERTY CORE REPOSITORY

As far as the recent research they’re supporting, Anest says most of the scientists using their cores have been focused on specific geographic areas. “We send out about 5,000 samples a year to researchers all over the world and they’re mostly looking at paleo climate,” she says. “Recently, it’s a smaller geographical area, so we have researchers looking at just how the Indian Ocean has changed over time or how that area of the world has changed climatically and that sort of thing.”

Requesting a core sample from the LDEO Core Repository is fairly straightforward. The facility is one of about 20 repositories that are part of a National Oceanic and Atmospheric Administration database—the Index to Marine and Lacustrine Geological Samples. Researchers will access the database for cores they’re interested in and reach out to Anest about the ones stored at Lamont-Doherty. They fill out a request form, Anest and her team check that the samples are available, and either approve it or work with the researchers to “change their intervals” if the core has been heavily sampled.

“We eventually take the samples and mail them away,” Anest says, adding that they have two different types of cores, dry and wet. Because the older, dry cores are more lithified—some are almost rock-hard—they’re a bit more challenging to handle than the newer, wet cores. “You have to use a scroll saw with a special blade on it to cut out pieces, but if they’re newer cores—newer being from the 1980s [onward]—they’ll still be a little bit wet because we keep them in the refrigerator,” Anest says. “Those are easier to sample because you can just scoop out mud. We try and keep the process simple for the researchers and for ourselves so we can quickly get things out and processed.”

Since the repository receives all of its funding from the National Science Foundation, Anest says funds could be a potential issue in the near future. “That might be challenging when we come up for renewal in a year’s time,” she explains. “Other than that, space is my biggest issue right now because our campus is relatively small and there’s no place to build new buildings, so my current storage space for samples will potentially be full in 10 years. Then I have to figure out what to take out of easy access storage.” 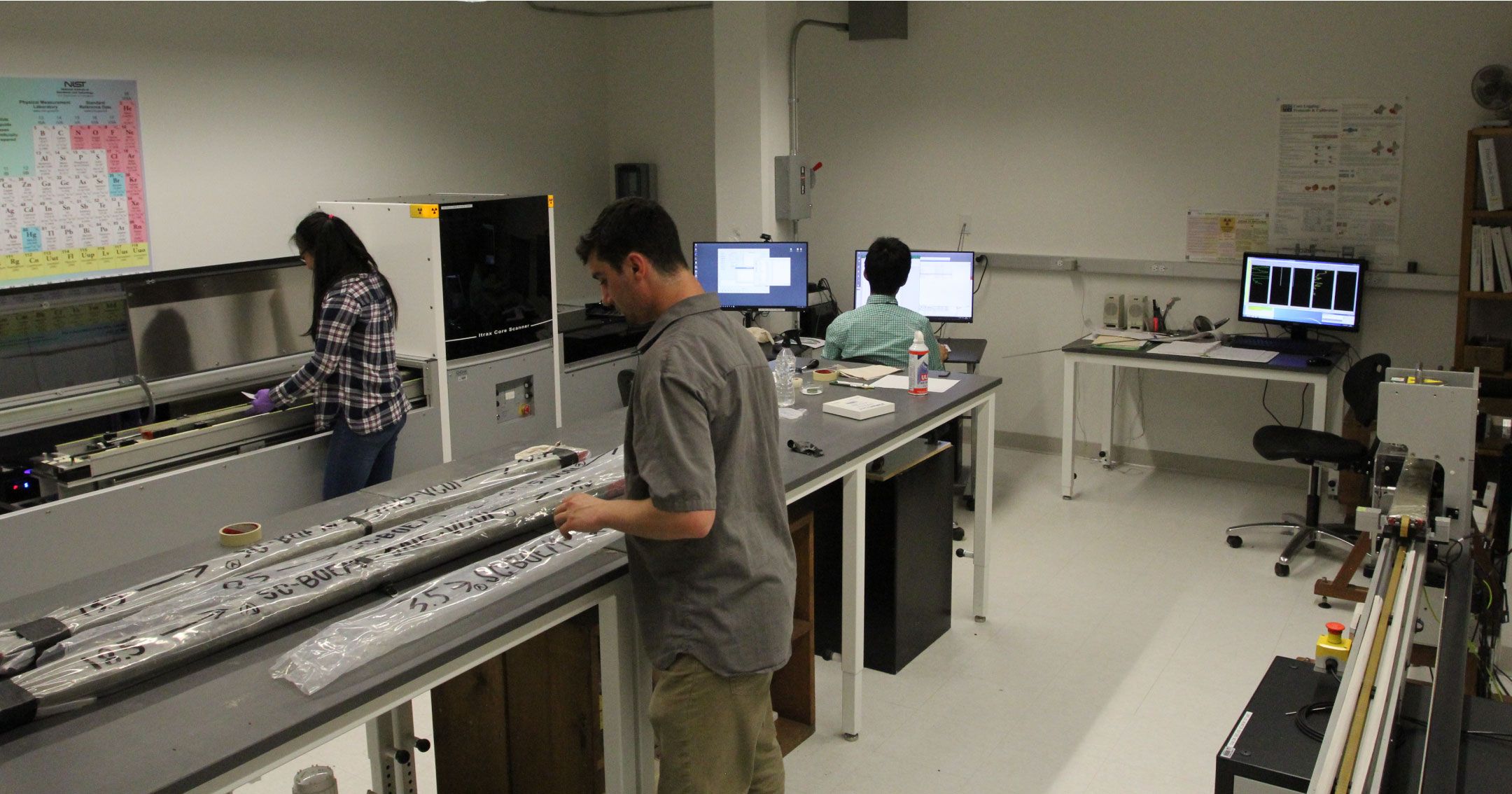 However, those looming obstacles don’t overshadow the positives of working at the repository. Having been a part of the LDEO repository for just over 20 years, Anest says the people are what make the job fun. Often working with undergraduate and high school students, Anest says she enjoys watching them grow and change throughout their time at the facility. “It’s a lot of fun talking to them about what projects they’re working on and helping them out,” she says. “Just being around them is fun. And the other researchers as well—the scientists and the professors. There’s a lot going on all the time. It’s a very engaging atmosphere.”

Going forward, the repository doesn’t have any specific plans or projects, but is always looking to upgrade the technology they offer to researchers and build on their outreach efforts, another big part of what they do, Anest says. “We’re always working on developing classes and outreach material because we do a lot of outreach locally with school groups,” she says. “We try to incorporate the newest findings in science and disseminate that to the public.”