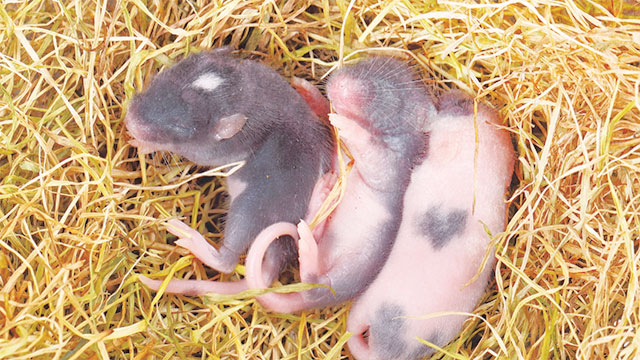 Lately, the Center for Reproductive Science at Northwestern University’s Feinberg School of Medicine in Chicago has received a lot of attention for two projects in particular. The first involved the development, with partners at Draper Laboratory, Inc., and the University of Illinois at Chicago, of a “female menstrual cycle in a dish,” known as EVATAR. This miniature, cube-like device contains 3-D models of female reproductive organs along with the liver and uses a fluid that simulates blood. The second project, involving a partnership with Northwestern’s McCormick School of Engineering, dealt with the creation of 3-D printed bioprosthetic ovaries that were tested in infertile mice. In May of this year, the university announced that those bioprosthetics had allowed the mice to successfully conceive and give birth to healthy pups.

Teresa Woodruff, director of the Center for Reproductive Science, says both projects were done in order to help better understand how to provide fertility for young cancer patients.

“Over 80 percent of pediatric cancer patients will survive their initial cancer diagnosis, but that life-preserving treatment can also affect their fertility,” Woodruff says. “We think of fertility as the issue survivors are most interested in, but in the pediatric case, we’re very concerned about the endocrine health of the children.”

Woodruff explains that loss of fertility isn’t the only consequence of cancer treatment at a young age.

“If the ovaries don’t make estrogen, then the children can’t transition through puberty,” she says. “So the utility of a long-acting, durable bioprosthetic is to provide individuals with [the] kind of normative function that they’ve lost due to the off-target effect of the cancer treatment.”

EVATAR, on the other hand, was created to help scientists understand how the ovarian follicles affect the biology of other tissues, Woodruff says.

“Microfluidics is a technology that’s been building momentum over the [p]ast 10 years, and it’s really fundamental [in modeling] the endocrine system,” she says. “Because there’s not been a lot of attention on the female, we wanted to include female reproductive organs as part of the equation in microfluidic conversations. That’s why we started that project. It’s been really rewarding—a cool project to help direct.”

That lack of attention on the female sex in scientific research is an issue that Woodruff aims to address in another role she plays at Northwestern—as director of the university’s Women’s Health Research Institute (WHRI). While not lab-based, it brings professionals from both within and outside the biomedical research community together, providing a forum where they can stay up to date on the latest sex differences research. The institute also provides toolkits for how to conduct sex-inclusive science.

“We recognized that there was an urgent, unmet need, which was to include females in clinical studies and to have [the] female sex represented in basic science, so in animals and cells,” Woodruff says, explaining why the institute was created in 2006. “The majority of studies published today include male-only cells and animals, so it was important that we make the case for XX and XY as equally valuable in the biomedical enterprise.”

She stresses that the WHRI is not just about the reproductive side of the female sex, which the work at the Center for Reproductive Science is focused on along with men’s reproductive health.

“Many people [associate] women’s health research with just the reproductive axis,” Woodruff says. “I want to very clearly say that the Women’s Health Research Institute is about whole sex-based biology—the entire body.” The WHRI’s work focuses on ensuring that people understand that every cell and tissue in the body has a sex.

“By not including the hormones and not understanding that there might be differences imposed on cells by the X and Y chromosome[s], we’re missing a lot of biological complexity and we’re losing a lot of information,” Woodruff says.

At the Center for Reproductive Science, they’re exploring some of those differences in their current work building male versions of the EVATAR, known as Dude Cubes, which will include models of the testes and prostate. They also hope to develop new models of human disease such as polycystic ovary syndrome, endometrial cancer, and ovarian cancer.

“These are models that, because they interact with the other tissues in the reproductive system, we’ve not had good surrogates [for], and so this provides a novel opportunity for that activity,” Woodruff explains.

With the bioprosthetic ovaries research, the next step is toward human transplants, with the goal of developing working bioprosthetics for patients who have lost fertility due to cancer treatment, she adds. As with most research, funding is a key challenge the center faces with that work.

“We’re grateful to the National Institutes of Health [NIH], which funds all biomedical research in the United States,” Woodruff says. “They are a great champion and we want to continue NIH funding, and in fact, I think it would be valuable for all of us if we grow that level of funding because that then influences the health of all of us.”

Limited time is another challenge, but one that they handle with strong collaborations, like those involved in the EVATAR and bioprosthetic projects.

“You can amplify your ability to do work by having teams working on a problem,” Woodruff says. “That’s been a really critical part of what we do.”

“We believe that there is going to be an extraordinary output of new data that comes because people are now thinking about sex as a biological variable,” Woodruff says. Though the NIH’s rule to include sex as a biological variable in the research it funds went into effect only on January 25, 2016, Woodruff has already heard of scientists who are making extraordinary advances. “I think over the next 10 years we’re going to find out more about the basis of fundamental biology [and] improve the drug pipeline, and in 10 years, we’re going to look back on that date in 2016 as the most important date in biomedical research.”