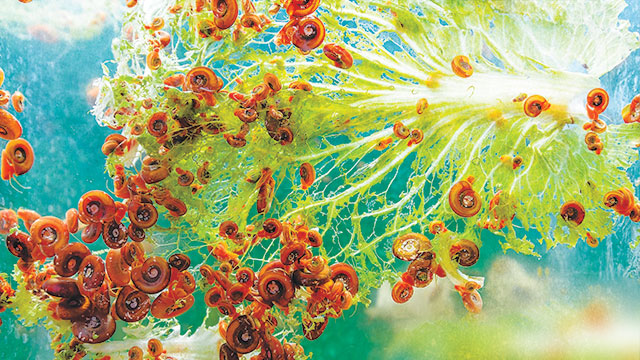 1. Freshwater snails are seen feeding on lettuce in an aquarium tank in the Biotron. These snails are used in research conducted by Timothy Yoshino, professor of pathobiological sciences, to investigate the transition of the human blood parasite Schistosoma mansoni, one of four species that infects an estimated 240 million people worldwide.Photo by Bryce Richter / UW-Madison

Many Climates, Many Experiments

For most organizations, varying temperatures in the workplace are a source of many battles between staff over whether the heat or A/C should be set to high or low. But for the Biotron Laboratory at the University of Wisconsin-Madison, varying temperatures and humidity levels are a good thing. The facility offers 45 environmentally controlled rooms that are completely isolated from one another and can simulate almost any climate on Earth. That makes it perfect for a wide variety of plant, animal, and materials research.

“In the morning, when our staff does daily rounds, they travel from the tropical snail room to a hot summer on a potato farm to a cool Wisconsin golf course to a winter burrow on the prairie, all in ten minutes,” says Biotron director Hannah Carey of the range of conditions the lab can simulate.

In terms of temperature, the lab can provide a range from -5°F to 110°F, and also offers humidity levels from “as dry as a desert to a moist tropical fog,” she explains. The Biotron can also simulate lighting conditions up to half the power of full sunlight and provide automatic watering and equipment control by the minute.

Those capabilities mean there’s always a huge variety of research going on at the Biotron, both academic and industrial, and it’s the facility’s goal to give researchers exactly what they need in terms of environmental conditions, whether they’re studying Schistosoma parasitic worms in freshwater snails, how potatoes respond to heat stress, how long pesticides persist in turfgrass on golf courses, or Carey’s own studies on hibernation in 13-lined ground squirrels.

“Our mission is to provide a unique environmental facility for researchers that they couldn’t replicate in their regular buildings, eliminating the need to travel to distant locations to carry out the work,” Carey says, adding that achieving that mission isn’t without its challenges. For example, a recent project looked at the effect of freeze-thaw cycles on concrete and required going from temperatures of -5°F to 95°F every day, mimicking several years’ worth of freezethaw cycles in only two months of research time.

“It was a load on the system, but we pulled it off,” Carey says.

Another challenge comes from the fact that many of the experiments done in the Biotron require very precise conditions, and even the slightest deviation can cause disaster. With Carey’s own research with ground squirrels, for instance, “temperature drops of only a few degrees can be very dangerous, and higher temperatures can induce arousal,” meaning the squirrels wake up before they are supposed to. To avoid such issues, the rooms have multiple alarms and are monitored 24/7, so that if something goes wrong, a staff member can respond right away.

“They have to get right on it, because the goal is to minimize any interruption in the researchers’ experiments so they don’t have to start all over,” Carey says. “It’s challenging, but it’s so satisfying, especially for the staff [who] are doing this every day.”

There are also backup rooms on hand if there’s a breakdown or logistical issue with the particular room a researcher is using. And Carey and her staff of about nine are always working to identify vulnerabilities and to brainstorm plans to deal with potential contingencies down the road, such as power outages and other issues that could impact their clients’ experiments.

Carey adds that hearing researchers say that an experiment wouldn’t have been possible without the Biotron is the main highlight of working there. Playing a part in so much important research isn’t so bad either. Most recently, early studies done at the facility on the growth of food plants under LED lights led to the International Space Station growing plants under LEDs.

Also recently, the Biotron has made a stronger push to get its name out there, as Carey admits they haven’t done the best job in the past of letting people know they’re there. She adds that while the facility was built in the heyday of environmental research in the late 1960s, opening in the early ’70s, there was a lull in interest in the decade after.

“Now things are changing again,” Carey says. “One part of it is just awareness of the environment, of urbanization and habitat change, and, of course, of warming. People are starting to realize that we need to know more about how the organisms—plants or animals—and materials will do going forward if we have different temperature-humidity scenarios.”