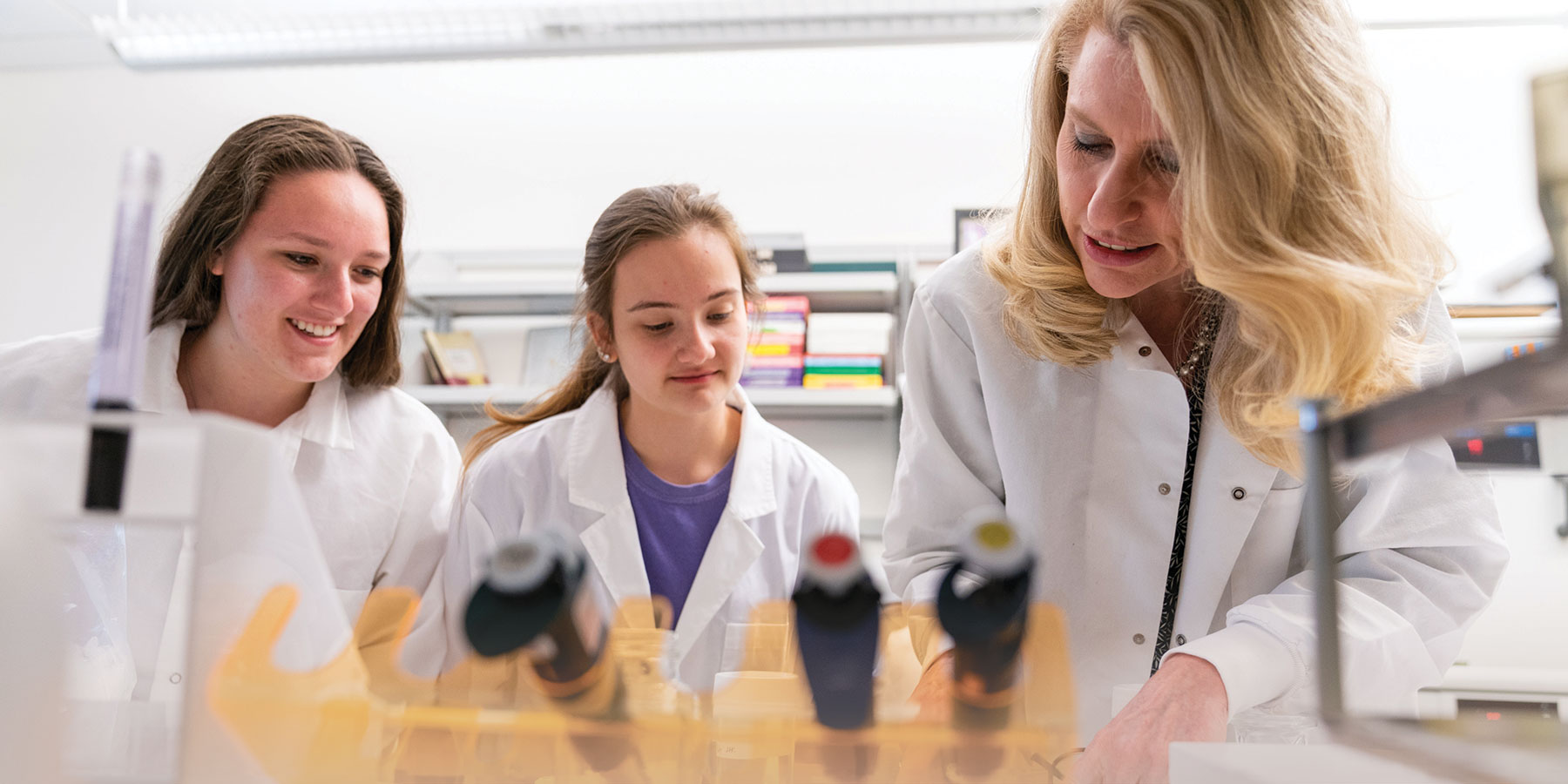 Mentoring students is one of the aspects Lambert (right) enjoys most about her work. Here, Lambert works with students in her lab pre-COVID-19.
UNIVERSITY OF RICHMOND

Dr. Kelly Lambert’s lab at the University of Richmond is all about bringing the natural world into the research space. Working with rats as a model, the Virginia lab aims to gain a greater understanding of how physical and social environments change animals’ brains—work that could eventually lead to benefits for humans.

However, it was recent research teaching rats a not-so-natural behavior that gained Lambert’s lab a ton of media attention. And it all started with a chat with her colleague Dr. Beth Crawford.

“She [Crawford] had seen a museum exhibit where goldfish would swim in a certain section of an aquarium, and it would move the aquarium in the direction they were swimming,” Lambert explains. Knowing that Lambert worked with rats, the colleague, who is a cognitive scientist, wondered if rats could be taught how to drive cars. 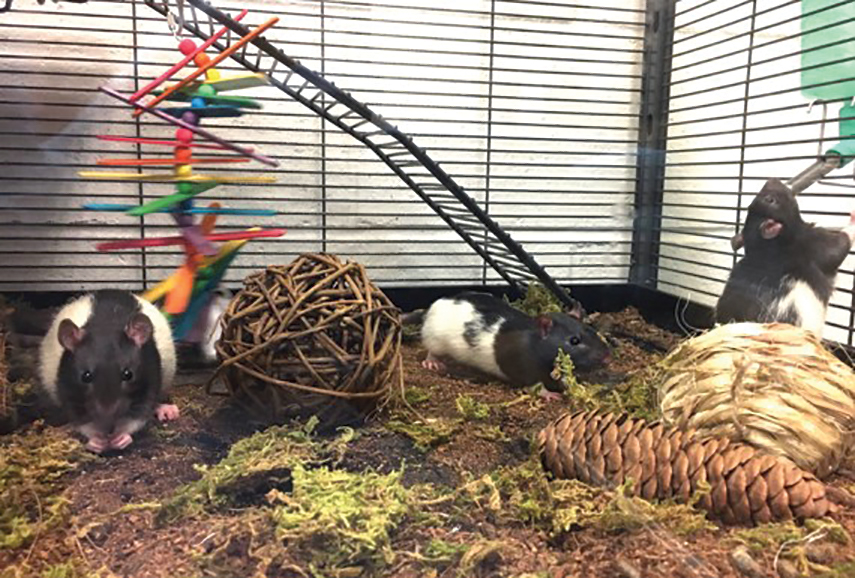 An example of the enriched environment rat housing used in the Lambert lab.
University of Richmond

“I laughed, because…that's ridiculous—I'm a serious scientist looking at natural behaviors,” Lambert says of her reaction at the time. “And then I realized she wasn't kidding.”

Another meeting about how such a study would be designed led to a car made of a container atop a set of wheels, with metal cables for the rats to steer with. Holding the cables completed a circuit to set the cars in motion. The team used Froot Loops cereal rewards to teach the rats to drive, finding through measuring stress hormones in the animals’ feces that learning to drive reduced rat stress levels. They also discovered that rats housed in an enriched environment—cages with toys and other structures to interact with—learned faster than those kept in standard cages.

That work drew so much media attention that it maxed out the software the university’s media relations department uses to track how many news stories are published as a result of specific research. The software only tracks up to as many as 1,500 stories—a number the rat driving research has surpassed.

While bringing plenty of attention to her lab, the research has also prompted Lambert to turn a critical eye on the use of rats housed in standard cages as a model for neuroscience research. She argues that an enriched environment closer to what rats would experience in nature is necessary to get better data. Recent work in the lab is exploring these concerns further, examining how rat housing could be enriched while working within the space constraints that many institutions using research animals face.

“I'm beginning to worry that [when it comes to animals in a standard environment], this may be kind of an abnormal animal—not a healthy animal,” she says. “And especially for neuroscience research—it may be okay for some types of medical research—but for psychiatric research, or anything that relates to the brain…the brain is in this body that needs to move.” 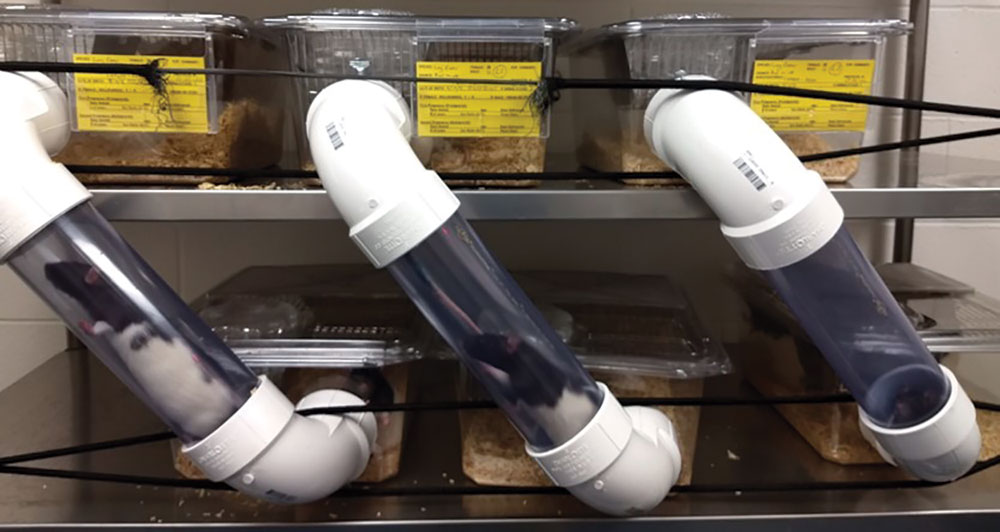 The rat lofts Lambert and her team have developed as a solution to standard rat housing in the lab.
UNIVERSITY OF RICHMOND

Her lab’s solution has been to develop “rat lofts”—essentially two standard cages stacked atop one another and connected with a length of PVC pipe—giving rats the ability to travel. So far, the rats housed in the lofts have been learning to drive just as quickly as those in the larger nine-square-foot enriched environment cages. The rats in the latest research also have some new wheels, with upgraded cars now including dashboards with levers to push rather than metal cables. In the original cars, the rats had to turn their bodies in the direction they wanted to go to push the wires, so the team is exploring if the rats can learn to associate pushing a left lever with going left, and so on, without having to physically turn in the desired direction. They are also taking their research out of the lab and into the woods around Richmond.

“Because of my concern about the laboratory conditions being kind of fake and artificial for the animals, and how that may impact the brain, we're starting to trap wild rats around Richmond working in collaboration with a biologist here,” she says, adding that they will compare the brains and other tissue related to stress and immune functions to the standard-housed laboratory animals. 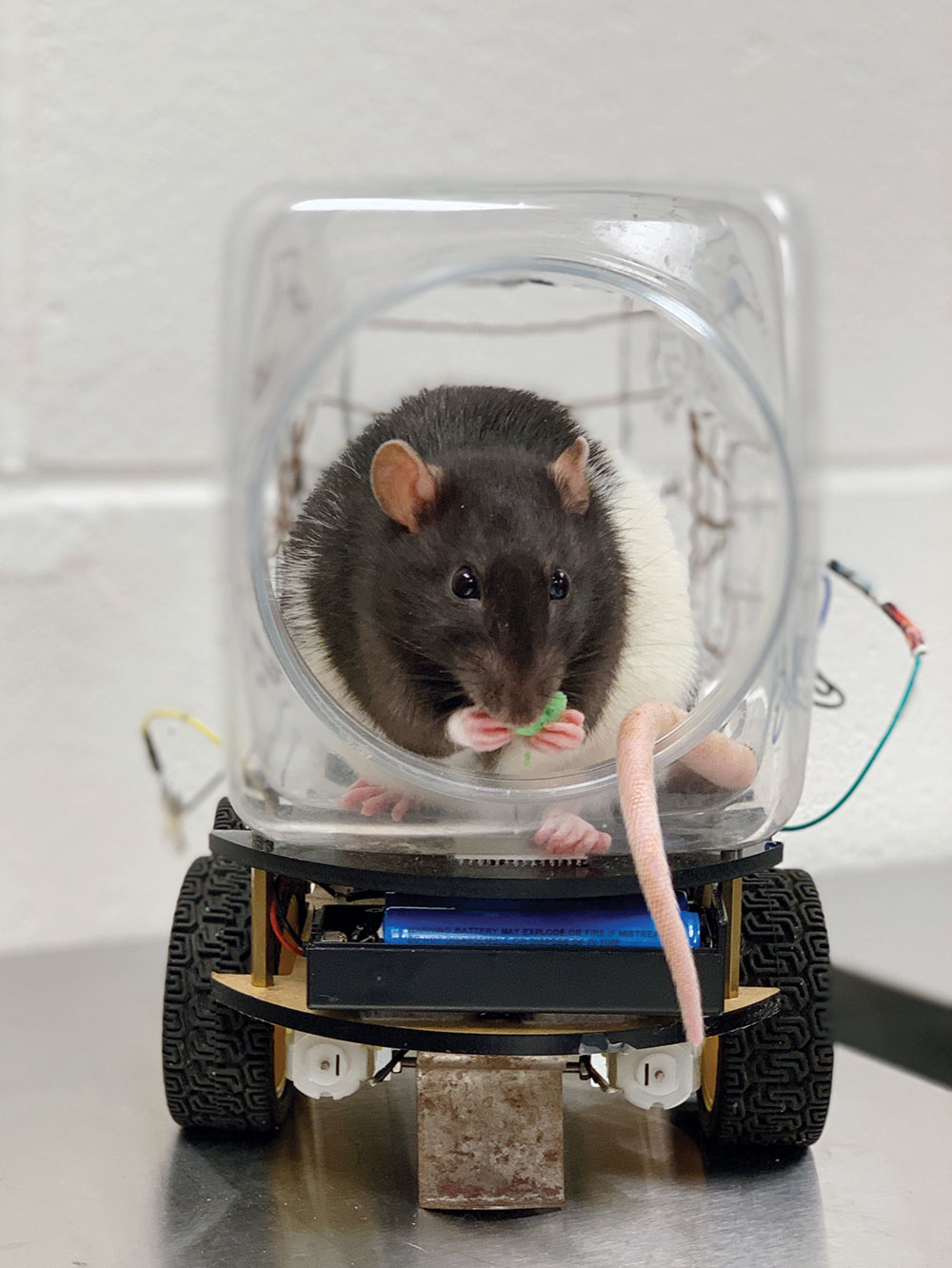 Lambert and her team used Froot Loops cereal rewards to train rats how to drive. Here, one of the rats eats its reward in one of the original model cars.
University of Richmond

In terms of space, Lambert’s lab is small, including two colony rooms, a transition room, two behavioral analysis rooms—all around 100 square feet each—and a 200-square foot room for procedures such as anesthetization in the university’s animal core, along with a room where they manage their Noldus behavioral observational software, and a 400-square-foot histology lab with typical equipment such as microscopes, a cryostat, and -80°C freezer.

Lambert’s team includes three permanent staff members, two full-time and one part-time, and, being based at a primarily undergraduate institution, numerous students coming through her lab to learn neuroscience and behavioral methodological approaches.

Mentoring these students is something Lambert says she enjoys most about her work, but having a constant turnover led to some challenges in terms of keeping track of data recorded on paper lab notebooks. The COVID-19 situation, while bringing its own challenges, gave them time to figure out a solution to the issue, eventually choosing SciNote’s electronic lab notebook to better track their data. 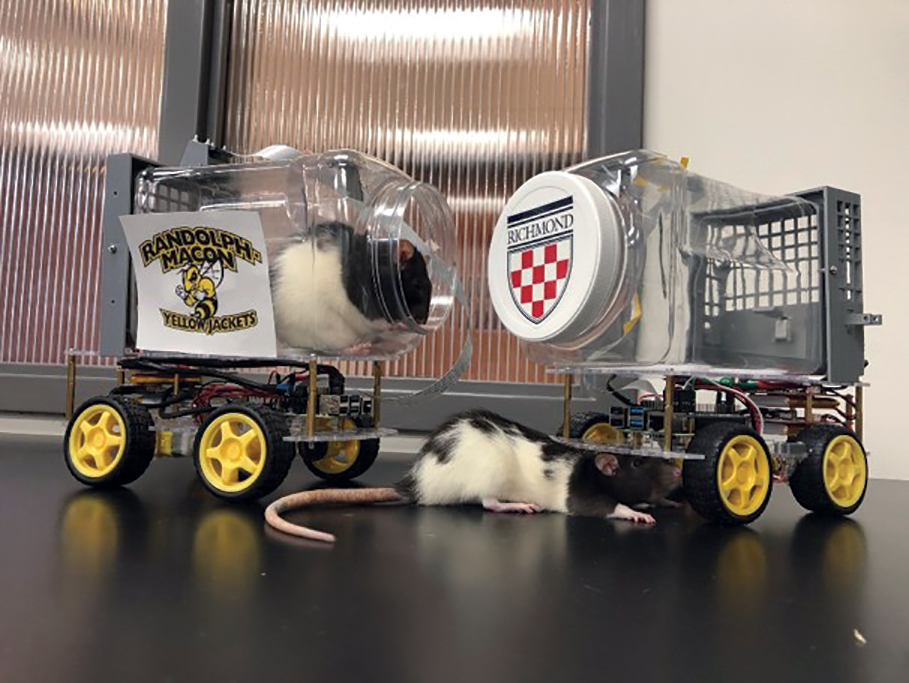 Lambert’s lab is collaborating with Randolph-Macon College computer science professor Dr. John McManus and his team to develop the latest model of rat car, which includes a 3D-printed dashboard with levers to push rather than metal cables.
UNIVERSITY OF RICHMOND

“Now all of our protocols, all of our data, are on this one system,” Lambert says. “And the students can't go in and change it… but the idea is to have an iPad on the bench that the students can use to access the protocols they are working with. If something needs to be adjusted, then they go to one of the staff to submit changes and updates to the relevant files. This approach provides more stability for the multiple projects and numerous data sets we are managing in the lab.”

While COVID-19 gave the team time to regroup, it also meant the lab couldn’t have students over the summer working on projects; instead having just a few socially distanced staff as well as remote options to connect those working from home. That meant a lot of memory storage capacity so students could score behavioral videos and work with photomicrographs of specific brain areas.

Managing challenges and planning for the future

At the time of writing, everyone was back in the lab, but they’ve needed to schedule things so that only one student is there at a time and ensure they follow added COVID-19 safety protocols.

“I'm looking forward to when I can be more hands-on and in close proximity to the students, because it's hard to replicate a lot of what we do in the lab remotely, or even from a social distance. But we have extended, adapted, and reevaluated our work where we could during this challenging pandemic,” Lambert says. 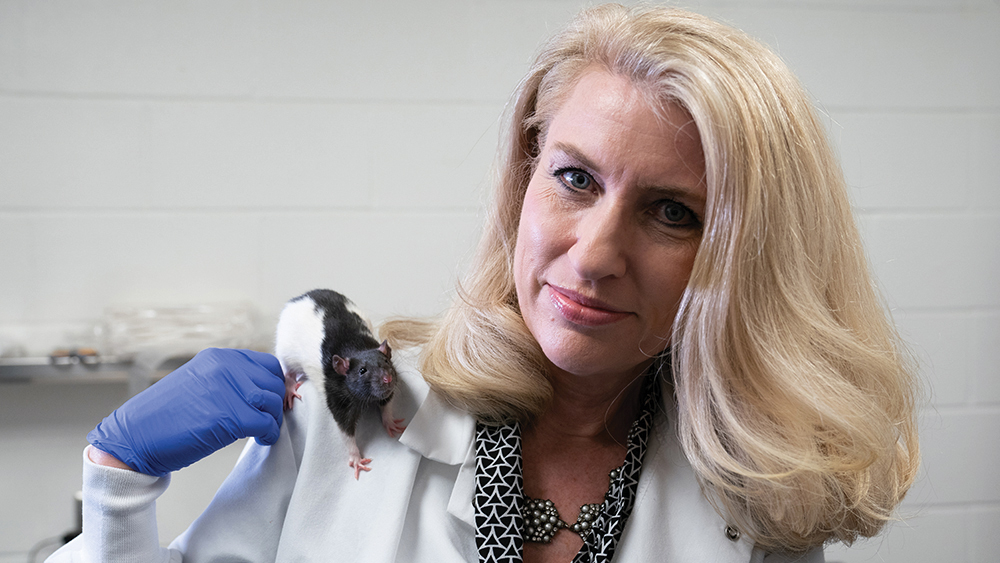 Dr. Kelly Lambert pictured with one of the Long-Evans rats used in her lab’s research.
UNIVERSITY OF RICHMOND

In addition to mentoring the students, Lambert says helping solve the mysteries of the brain and doing research that could one day translate to human challenges is also a meaningful and rewarding aspect of her work. “We can systematically investigate some of these mysteries of life related to the brain and behavior and mental functions through research,” she says. “Maybe something we do can contribute to a real-world problem of translational research—maybe there's something about what we're doing with this training that can help us understand why gardening or cooking makes us feel less stressed.”

Going forward, the lab will continue to bring its work into the field, focusing on a different but equally clever research subject—the raccoon. Since raccoons can’t be housed in-lab, Lambert is currently looking at using MRI vans where they can trap the animals, anesthetize them, then scan their brains and take a blood sample before releasing them to add to the data they’ve been collecting in the controlled lab environment.

“It's important to establish that our research techniques are the best techniques for our research questions and the species model is the most appropriate to answer the questions that we're using all these resources for,” Lambert says. “It's time to recalibrate what we're doing in the lab…and make things more authentic. We need to get real, even though we're in a laboratory.”