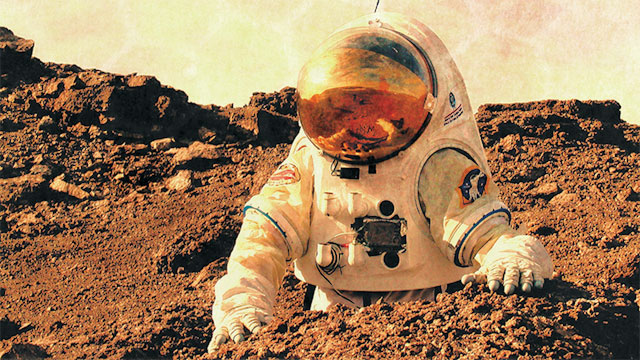 While initial stays on Mars are expected to be short, the goal is to eventually have researchers on the surface for as long as 22 months.
NASA

Currently, the only analytical lab on Mars is a suite of instruments wheeling across the planet’s surface on the Curiosity rover, managed by the Mars Science Laboratory mission. Over the four years it’s been on the Red Planet, Curiosity’s mission has been to analyze soil and rock samples to help determine whether microbes ever lived there. “While Curiosity and previous rovers have revolutionized our understanding of Mars, we are really at the point we are ready for human explorers/ scientists, to take our knowledge of Mars, a whole new world, to the next level,” says Richard Davis, the assistant director for science and exploration in the Planetary Science Division of the Science Mission Directorate at NASA headquarters (Washington, D.C.).

“It may be that we will not be able to definitively answer the question of whether life developed on Mars until we have adaptable, creative, [and] intuitive humans on the surface of Mars looking for signs of life,” he says. Such missions would require a semi-permanent laboratory on Mars, and while NASA hasn’t yet revealed exactly what that lab would look like, Davis says it will probably be similar in size and appearance to the lab module onboard the International Space Station, with up to four researchers able to work at the same time. As far as exact location, he adds that in October 2015, NASA started the selection process for the site of a human base/research station on Mars, with 47 possible landing sites in the running.

Related Article: New Instrument Could Search for Signatures of Life on Mars

“We are looking for a semi-permanent base where we can accomplish outstanding diverse science and where we can have access to the resources needed to sustain our crews,” Davis explains. “Ultimately, we will need much more reconnaissance to actually pick a site, but there is strong consensus that we can, in fact, find a site with both excellent science opportunities and needed resources.”

As far as how long scientists would be working on Mars, Davis says the typical manned missions are planned to be 1,000 to 1,100 days long, or roughly three years, with seven months required to get to Mars and another seven required to get back, leaving them in the Martian system for about 22 months.

“Initial missions to the surface may be short stays as we learn to live and operate on this new world and build up the infrastructure to allow people to live and work there,” Davis says. “After completing their mission, the crew would then return to orbit, rendezvous with their Mars transfer vehicle, and wait for their return opportunity. Eventually, though, the goal is to spend the full 22 months on the surface, researching and exploring.”

NASA is also just beginning the process of deciding which scientific instruments and equipment a manned lab on Mars would be outfitted with. However, Davis says they don’t expect any difficulties with transporting that equipment. “We are currently assuming that each lander will be able to deliver up to 20 metric tons,” Davis explains. “With that kind of mass, we can easily envision a fully outfitted lab being delivered [by] one lander. We would also anticipate additional laboratory racks and individual experiments being delivered as smaller payloads on other landers.”

For field experiments, Davis says human missions will likely be similar to those the rovers have done, “but the nature of the investigations will become more complicated … more subtle.” As an example, he adds that because drills require human interaction to keep running, scientists have been able to do only shallow drilling with rovers. “With humans, we can go much deeper and actually obtain core samples,” Davis says. “Such core samples will be as important on Mars as they are on Earth. This will provide critical geological insight. Furthermore, if there is life on Mars, it may have migrated to below the surface, given the high radiation exposures on the surface. Core samples may be key for finding such life, if it exists.” In 2015, a multidisciplinary team looked at science priorities for Mars that maximize humans’ unique skills and in which areas of science they expect the most significant gains to be made.

“One key area is geological research, where having a geologist in the field will be critically important for progress,” Davis says. “The search for life will also benefit massively from having a ‘proximal’ human being on this fascinating alien planet.”

Of course, a lab on Mars likely won’t come without challenges, with one of those being figuring out the exact equipment they’ll need to properly research and understand an alien environment—one that’s similar to Earth but also very different, Davis explains.

“[Mars] has an atmosphere, but it’s like being at 100,000 feet in the Earth’s atmosphere. A warm day gets up to freezing, but temperatures can drop by over 120 degrees at night. Radiation is much higher,” he says. “If life existed on Mars … it may have evolved in ways that we cannot anticipate. So ensuring that human researchers have a diversity of instruments there to meaningfully aid in that research is key.”

Maintenance is another challenge not just for the lab but also for manned Mars missions in general, with communication being a main hurdle. Davis explains that, depending on where Earth and Mars are in their orbits around the sun, it can take anywhere from seven to 22 minutes to send a message between the two planets. That means that if a scientist on Mars has a maintenance question for the team back on Earth, it will take at least 14 minutes to get an answer, assuming the Earth-based team has one.

“Having a real-time conversation is almost impossible,” Davis says. “We will have to learn to work around that. Having intelligent computer systems on Mars that can help will probably be critical for speeding up this kind of work.”

However, it will be some time before scientists have to deal with these challenges full on, with NASA’s goal to have humans in the vicinity of Mars in the 2030s. While humans have been exploring Mars with robots for over 50 years, Davis says it will take humans and the “right kind of laboratories” to truly answer the many scientific and philosophical questions asked about Mars over the years.

“Humans, with their ability to intuit, create, and make real-time decisions, will make possible intelligent sampling in geologic context, iterative environmental field investigations, and sample preparation and analyses in a habitat-based laboratory,” he says. “Humans will advance a multidisciplinary set of scientific objectives, such as investigations into astrobiology, atmospheric science, medicine, and geoscience. We are looking for creative and out-of-the-box options that will allow us to achieve this audacious goal as soon as possible.”

Telescope Helps Explain Why Uranus and Neptune Are Different Colors

Telescope Helps Explain Why Uranus and Neptune Are Different Colors