Leaders in research and service laboratories make no secret of their desire for a bigger serving of commitment and cooperation from and among their staff scientists and technicians. Lab directors have, more often than not, tried to implement reasonable performance metrics and attractive incentives, carefully tailored to their organizations’ culture. They painstakingly nurture and monitor such motivators in an effort to encourage staff to participate more fully. Despite such efforts, however, cooperation and commitment often appear to be available only in meager portions.

Vish Krishnan, a professor at the Rady School of Management, University of California, San Diego (UCSD), says that such initiatives fall into the routine, normal four-step PDCA (plan-do-check-act or plan-do-check-adjust) improvement cycle in most organizations. “This is not rocket science, but it is hard to implement and keep on track,” says Krishnan, who adds, “Labs are very much the prototypical example of the highly trained, high-ego workforce type.” He likens the management of such highly independent-minded workers to “the herding of wild cats.”

Successful PDCA implementation in the lab setting requires three key elements—training, metrics, and incentives, according to Krishnan. “Training is essential to make sure people understand how to perform their tasks and functions and for them to know that the organization values them and their skills,” he says. Metrics should be formulated to measure not only performance but also intangibles such as cohesiveness in working together. “Incentives change behavior, by and large,” says Krishnan.

Turning to factors that impede cooperation and commitment in a laboratory environment, Krishnan says, “The challenge in a lab management setting is that we are dealing with a highly trained and knowledgeable workforce—so you can’t use hierarchical management techniques.” He is careful to point out, “This is not exclusive to the lab but can be seen in other types of knowledge-oriented businesses as well.”

“These workers are highly capable and extremely talented, and that is an important part of the challenge in getting their cooperation and commitment,” he says. For Krishnan, one key question is how to find the alignment between cooperation and commitment goals within a horizontal workforce as opposed to a more vertical one, where hierarchical or command methods have been known to generate positive outcomes.

Krishnan sees a mix involving the pursuit of individual interests, heightened competitiveness, and turf protection as definite impediments to cooperation. “In grant funding, for example, there is very little room at the top, and competition is heavy. These are highly competitive people, often with strongly held points of view, who have acquired advanced degrees and training, experiencing inherent competition along the way—so there is that competitive spirit.”

“Unfortunately, their scientific training may not have prepared them to be team players. There could be a diversity of perspectives, which can actually be a strength.” Krishnan says better integration will help diversify the risks but lab staffers are “not taught that way.”

“We are taught that the world is convergent, that there are unique results, and that we need to pursue them. I think that is in part the competitive attitude, partly the training, and partly the convergent mindset—all of these pose problems,” says Krishnan.

In entities where there are inadequate levels of cooperation, Krishnan says, “Progress is generally slower, and we may not be getting the best from individuals. Their fullest effectiveness is not realized because operational skills are not optimized; the entity is not firing on all cylinders.”

Rutgers University management and global business professor Deborah Dougherty notes that laboratory researchers tackle complex questions, typically seeking innovative solutions. She points out that in the case of drug discovery, one of her research specialties, researchers use different, even competing, methods to sift through enormous amounts of complicated, unpredictable, and often interdependent data to arrive at therapeutic solutions for hitherto unmet medical needs.

In a September-October 2012 article in Organization Science, Dougherty and co-author Danielle Dunne, a professor at Fordham University, reported findings from their research, which included interviews with 85 scientists and managers engaged in drug discovery. The authors noted that drug discovery is currently tackled by at least two disparate types of scientists who target the same goal—safe and efficacious therapies. There are the therapy scientists, who work in traditional laboratories and investigate physical materials, and digital scientists, who utilize computer technology to manipulate digital signals. The latter group is focused on bioinformatics, genomics, proteomics, and metabolomics, among others, that would be impossible absent advanced computer technologies. In essence, each group deals differently with the complexities of drug discovery.

The authors noted that such differences interfere with cooperation. Part of the solution, they suggested, entails the development of ways to transform innovative activity. Their work suggests that the creation of new common ground would facilitate the integration of knowledge and help overcome the challenges associated with complexity.

In an interview with Lab Manager, Dougherty adds, “Strategy shapes the innovation process, which is very complicated,” and it is important that researchers and scientists understand the underlying strategic goals of the entity in which they conduct research or carry out other activities.

She says it is essential for administrators to create work environments in which the staff can become energized, motivated, cooperative, and committed. She notes, however, that it is hard to commit to a place where what is required is unclear and where punishment is meted out for not completing tasks that workers never expected to do and did not know they were required to complete.

“If you want commitment, you have to foster an engaging, motivating work site,” says Dougherty. Much of the available research suggests that scientists are motivated by the pursuit of new knowledge, which they can use to figure out better, more innovative processes and improved products, she notes.

Krishnan says, “There is strong recognition at UCSD that we need to train our graduate students, post docs, and junior faculty more broadly, in a multidisciplinary way.” He also cites recent calls for proposals from the National Institutes of Health (NIH) that require universities and institutions to train people more broadly as part of this overall recognition.

“Even in the lab setting, there is a need for principal investigators (PIs) to have a broader approach. Typically their technical skills are great, but technical skills will only take you so far. When we look at people who are ultimately successful, it requires a combination of technical and social skills. These are the two halves of success,” says Krishnan.

He says that the next generation appears more acutely aware of the value of these skills and is likely to embrace them more eagerly. “There is great motivation to change the curriculum to move beyond technical skills, and some students in our institution are really making the case that we need to make room for some of these more pragmatic skills as opposed to narrow technical skills. It will, of course, take some time before it permeates the curriculum, but there is definitely a trend in that direction.”

With respect to where the problems with cooperation and commitment seem most severe, Krishnan, who also consults for private sector businesses, says, “From my experience, academia seems to have a worse problem than corporate entities.”

He notes, however, “It really depends on the culture of the organization and how it is managed. For example, at UCSD we have the Clinical and Translational Research Institute (CTRI), headed by Gary Firestein, who has a lot of industry and practical experience. As a result, he manages the center professionally and has instilled a mission-focused culture. So even in academia we have settings in which people work together very well—and in some companies in the private sector we see dysfunction.”

Krishnan explains, “In general, it may be that in companies having a profitmaximizing role, and subject to quarterly and other stringent financial measures such as investor pressures, they may have the incentive to put aside their differences and work together.

Even in academia, the pressure of funding is ratcheting up so much that people are realizing that they have to work together. In a number of cases, grants require multifunctional perspectives, so there is really a strong incentive to find ways to work together.”

Krishnan believes that as the pie (essentially research grants and related funding) gets smaller, researchers are realizing that “they have to manage themselves better, learn to address conflicts more effectively, find better ways to work together more cohesively, and develop value systems that stress cooperation as a priority.”

With respect to practical advice on concrete steps laboratory leaders can take to improve cooperation, Krishnan says the first is diagnosis: “Find out what is causing the problem. Are there some bad apples, people who are particularly hard to work with and who consider whatever you do a problem? Or are there systemic cultural issues within the organization? This is the kind of diagnostic assessment that you do up front.” 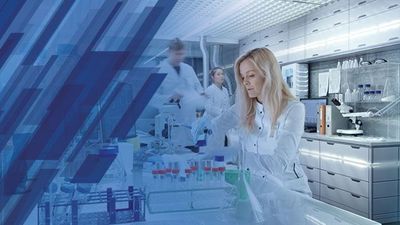