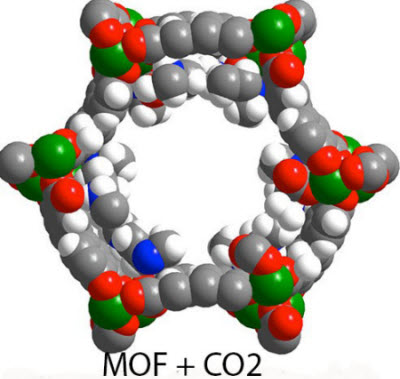 Appending a diamine molecule to this manganese-based MOF greatly increased its capacity for adsorbing CO2. Green, gray, red, blue and white spheres represent Mn, C, O, N and H atoms respectively.Lawrence Berkeley National LaboratoryA means by which the removal of carbon dioxide (CO2) from coal-fired power plants might one day be done far more efficiently and at far lower costs than today has been discovered by a team of researchers with the U.S. Department of Energy (DOE)’s Lawrence Berkeley National Laboratory (Berkeley Lab). By appending a diamine molecule to the sponge-like solid materials known as metal-organic-frameworks (MOFs), the researchers were able to more than triple the CO2-scrubbing capacity of the MOFs, while significantly reducing parasitic energy.

“We’ve shown that diamine-appended MOFs can function as phase-change CO2 adsorbents, with unusual step-shaped CO2 adsorption isotherms that shift markedly with temperature and result in a much higher separation capacity,” says Jeffrey Long, a chemist with Berkeley Lab’s Materials Sciences Division and the University of California (UC) Berkeley. “The step-shaped adsorption isotherms are the product of an unprecedented cooperative process in which CO2 molecules insert into metal-amine bonds, inducing a reorganization of the amines into well-ordered chains of ammonium carbamate.”

Details on this research are reported in a paper published in the journal Nature. The paper is titled “Cooperative insertion of CO2 in diamine-appended metal-organic frameworks.” Long is the corresponding author. The lead authors are Thomas McDonald and Jarad Mason. (See below for a complete list of co-authors.) 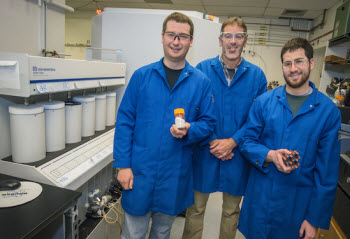 (From left) Tom McDonald, Jeffrey Long and Jarad Mason were part of a collaboration that discovered a way to improve the carbon-scrubbing capabilities of MOFs.Lawrence Berkeley National LaboratoryApproximately 13 billion tons of carbon dioxide are released into the atmosphere each year as a result of burning coal for the production of electricity. These carbon emissions are major contributors to global climate change and the acidification of our planet’s oceans. However, given that the United States holds the world’s largest estimated recoverable reserves of coal, coal-burning power plants will continue to be a major source of our nation’s electricity generation for the foreseeable future. This makes the wide-spread implementation of carbon capture and storage technologies at coal-fired power plants an imperative.

Current carbon capture and storage technologies are based on aqueous amine scrubbers that impose a substantial energy penalty for their use. If widely implemented, these scrubbers would consume about one-third of the energy generated by a power plant and this would substantially drive up the price of electricity. MOFs have been proposed as a highly promising alternative to amine scrubbers. Consisting of a metal center surrounded by organic “linker” molecules, MOFs form a highly porous three-dimensional crystal framework with an extraordinarily large internal surface area – a MOF the size of a sugar cube if unfolded and flattened would blanket a football field. By altering their composition, MOFs can be tailored to serve as highly effective storage vessels for capturing and containing carbon dioxide.

Long and colleagues at the Center for Gas Separation Relevant to Clean Energy Technologies, a DOE-funded Energy Frontier Research Center (EFRC) hosted by UC Berkeley, have been exploring various ways to functionalize MOFs for the selective adsorption of CO2.

“An ideal MOF will selectively bind CO2 in the presence of nitrogen and release it under mild regeneration conditions,” Long says. “We were experimenting with the appending of diamines to the open coordination sites in the framework pores of a MOF as a way of increasing the adsorption of CO2. Once we saw the formation of the isotherm steps we knew we had something different and important going on.”

A portion of the ammonium carbamate chain formed along the pore surface of a MOF when CO2 molecules are inserted into metal-amine bonds. Green, gray, red, blue and white spheres represent Mn, C, O, N and H atoms respectively.Lawrence Berkeley National LaboratoryThe appending of the diamine to the metal sites set off a chain reaction of events in which the carbon, metal and amines cooperatively reconfigured into the ammonium carbonates that enabled the CO2 isotherm adsorption steps. The researchers then found that the pressure at which these adsorption steps occur can be tuned in accordance with the strengths of the metal-amine bonds. By starting with magnesium ions, then strategically replacing them with ions of manganese, iron, cobalt and zinc, Long and his colleagues were able to create the first solid phase-change CO2 scrubbing materials.

“With our technique, large CO2 separation capacities can be achieved with small temperature swings and regeneration energies that are appreciably lower than what can be achieved with state-of-the-art aqueous amine solutions,” Long says. “We now understand how this CO2 cooperative process works and should be able to use the mechanism to design highly efficient adsorbents for removing CO2 from various gas mixtures.”

To adapt this technique to real-world applications, Long is now working with chemist Steven Kaye on the Mosaic Materials Project. Aimed at replacing today’s energy-intensive and expensive distillation and adsorption processes with high-efficiency MOFs, the Mosaic Materials Project is being funded by Cyclotron Road, a technology-incubation program established by Berkeley Lab.

Portions of this research were supported by DOE’s Advanced Research Projects Agency–Energy (ARPA-E).