(Based on an article written by Tom Abate, a Stanford University science writer, with additions by Warren Froelich, SDSC External Relations) 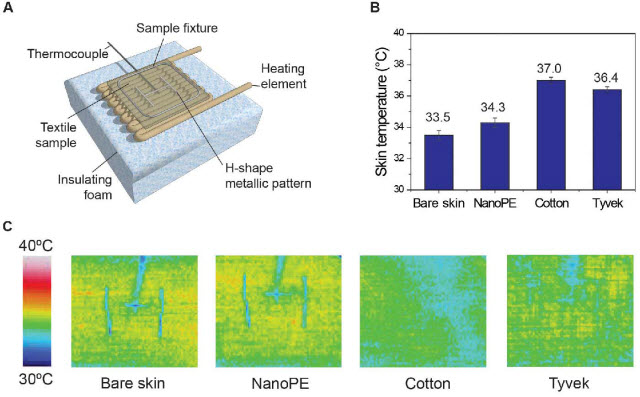 Thermal measurement of nanopolyethylene (nanoPE) and various textile samples. (A) experimental setup of textile thermal measurement. The heating element that generates constant heating power is used to simulate human skin, and the "skin temperature" is measured with the thermocouple. Lower skin temperature means a better cooling effect. (B) Thermal measurement of bare skin, nanoPE, cotton, and Tyvek. NanoPE has a much better cooling effect than that of cotton and Tyvek because of its infrared (IR)-transparency. (C) Thermal imaging of bare skin and the three samples. Only nanoPE can reveal the H-shape metallic pattern because of its IR-transparency.Photo by Stanford University

Stanford University researchers, with the aid of the Comet supercomputer at the San Diego Supercomputer at UC San Diego, have engineered a low-cost plastic material that could become the basis for clothing that cools the wearer, reducing the need for energy-consuming air conditioning.

Describing their work in a recent issue of Science, the journal of the American Association for the Advancement of Science (AAAS), the researchers suggested that this new family of fabrics could become the basis for garments that keep people cool in hot climates without air conditioning.

“If you can cool the person rather than the building where they work or live, that will save energy,” said Yi Cui, an associate professor of materials science and engineering at Stanford University and of photon science at SLAC National Accelerator Laboratory, and the study’s principal investigator.

The new material works by allowing the body to discharge heat in two ways that would make the wearer feel nearly 4 degrees Fahrenheit cooler than if they wore cotton clothing.

The material cools by letting perspiration evaporate through the material, something ordinary fabrics already do. But the Stanford material provides a second, revolutionary cooling mechanism: allowing heat that the body emits as infrared radiation to pass through the plastic textile.

Related Article: 'Back to the Future' Inspires Solar Nanotech-Powered Clothing

All objects, including our bodies, throw off heat in the form of infrared radiation, an invisible and benign wavelength of light. Blankets warm us by trapping infrared heat emissions close to the body. This thermal radiation escaping from our bodies is what makes us visible in the dark through night-vision goggles.

“Forty to 60 percent of our body heat is dissipated as infrared radiation when we are sitting in an office,” said Shanhui Fan, co-author of the study and a professor of electrical engineering who specializes in photonics, which is the study of visible and invisible light. “But until now there has been little or no research on designing the thermal radiation characteristics of textiles.”

The research blended computer simulations, nanotechnology, photonics, and chemistry to give polyethylene—the clear, clingy plastic we use as kitchen wrap—a number of characteristics desirable in clothing material: It allows thermal radiation, air, and water vapor to pass right through and is opaque to visible light.

The easiest attribute was allowing infrared radiation to pass through the material, because this is a characteristic of ordinary polyethylene food wrap. Of course, kitchen plastic is impervious to water and is see-through as well, rendering it useless as clothing.

The Stanford researchers tackled these deficiencies one at a time. As an initial step, they created computer models that captured the optical properties of nanoporous polyethylene. Simulations were conducted on a local compute cluster at Stanford, in addition to SDSC’s petascale Comet supercomputer and Stampede at the Texas Advanced Computing Center at the University of Texas in Austin. The resulting models encompassed a wide optical wavelength range, from the visible to infrared.

“By adjusting for a variety of parameters we were able to identify a pore size range, a nanopore, that best suited the purpose of the textile, one that is highly opaque visibly and at the same time highly transparent in the thermal wavelength range,” said Fan.

“Solving for electromagnetic wave propagation in large 3D structures is very computationally demanding, and can only be done on high-performance computers,” he added. “Otherwise it would take too much of time. The large shared memory in the Comet cluster was quite beneficial for the code that we were using.”

Using their computer models as a guide, the researchers found a variant of polyethylene commonly used in battery making that has a specific nanostructure that is opaque to visible light yet is transparent to infrared radiation, which could let body heat escape. This provided a base material that was opaque to visible light for the sake of modesty but thermally transparent for purposes of energy efficiency.

They then modified the industrial polyethylene by treating it with benign chemicals to enable water vapor molecules to evaporate through nanopores in the plastic, said postdoctoral scholar and team member Po-Chun Hsu, allowing the plastic to breathe like a natural fiber.

That success gave the researchers a single-sheet material that met their three basic criteria for a cooling fabric. To make this thin material more fabric-like, they created a three-ply version: two sheets of treated polyethylene separated by a cotton mesh for strength and thickness.

To test the cooling potential of their three-ply construct versus a cotton fabric of comparable thickness, they placed a small swatch of each material on a surface that was as warm as bare skin and measured how much heat each material trapped.

Related Article: Toward Clothes That Fix Their Own Rips (Video)

“Wearing anything traps some heat and makes the skin warmer,” Fan said. “If dissipating thermal radiation were our only concern, then it would be best to wear nothing.”

The comparison showed that the cotton fabric made the skin surface 3.6 F warmer than their cooling textile. The researchers said this difference means that a person dressed in their new material might feel less inclined to turn on a fan or air conditioner.

The researchers are continuing their work on several fronts, including adding more colors, textures, and cloth-like characteristics to their material. Adapting a material already mass produced for the battery industry could make it easier to create products.

“We fully expect high-performance computers to be of critical help in our next simulations involving larger scale and more complex structures,” said Alex Song, a Stanford postdoctoral research associate, who carried out the electromagnetic simulations of these fiber structures.