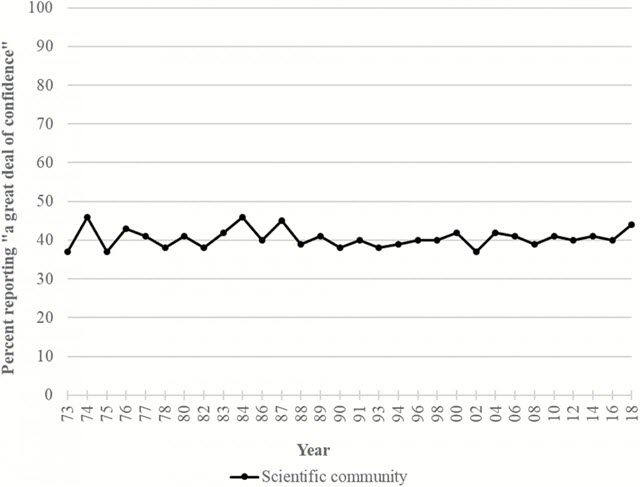 In the 2018 General Social Survey, about 40 percent of Americans reported having a great deal of confidence in the leaders of the scientific community, a number that has changed little since polling began in 1973.Credit: Image courtesy of Dominique Brossard

MADISON, WI — A new report analyzing decades of public opinion surveys reveals that the public's trust in scientists has remained stable and high over decades.

By various measures, Americans reported that they trusted scientists more than they trusted many other institutions and professions, including journalists, judges, and Congress. That trust can affect how people interpret scientific information related to human health or government policies.

In the 2018 General Social Survey (GSS), about 40 percent of respondents reported a great deal of confidence in the leaders of scientific institutions, a number that has changed little since surveying began in 1973. A majority expressed either a "great deal" or "some" confidence in the scientific community throughout the survey period.

"We can say without a doubt that the vast majority of Americans have confidence in the scientific community," says Dominque Brossard, a University of Wisconsin-Madison professor of life sciences communication and the senior author of the report. "Over and over again, scientists are at the top of trustworthy professions."

This is further supported by Harris Polls showing that, over the last two decades, roughly three-quarters of Americans surveyed said they would trust scientists to tell them the truth. This was more than they trusted most other professionals aside from doctors and teachers.

Brossard says increasing concerns among scientists over science becoming partisan are not reflected in recent GSS polls, which show fairly modest differences between Democrats' and Republicans' confidence in the scientific community. While Democrats reported higher confidence in scientists than Republicans did in 2018, members of both parties have reported similar, high levels of confidence over the past 45 years. 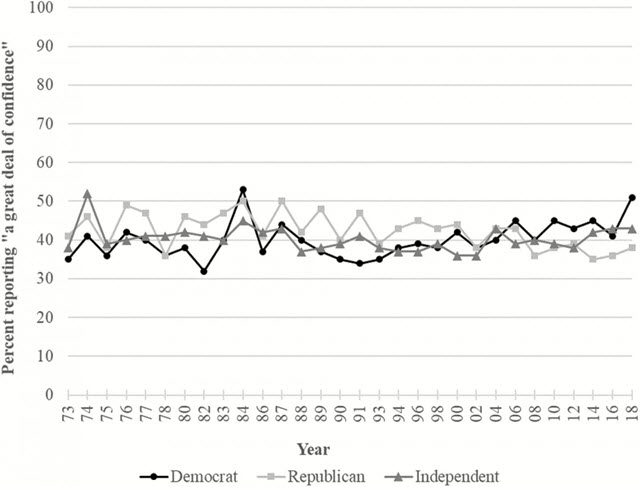 Members of different political parties have generally reported similar confidence in scientific leaders over the last 45 years. While Republicans and independents resembled the general public in their confidence in science in 2018, above average numbers of Democrats reported a great deal of confidence in the institution that year.Credit: Image courtesy of Dominique Brossard

Brossard and her team, including graduate student and lead author Nicole Krause, published their study Sept. 24, 2019 in Public Opinion Quarterly. They analyzed long-term polls that measured some aspect of trust or confidence in institutions. Their findings suggest that recent political events have done little to erode Americans' overall high trust in science and scientists.

Brossard's team began its investigation following the 2017 March for Science. The protest sprang out of concerns that the Trump administration would discount or suppress scientific information, and it appeared to mark an increase in the politicization of science.

The same poll revealed an uptick in confidence among Democrats in 2018, to about half of the population surveyed, which created a modest partisan gap. But partisan-specific confidence is less stable than overall confidence and has fluctuated between 35 percent and 50 percent of Democrats, Republicans, and independents over the past 45 years.

Similarly, about 40 percent of Christians expressed a great deal of confidence in scientists, in line with the general population. Members of other religions or no religion expressed higher rates of confidence, between 50 percent and 60 percent. 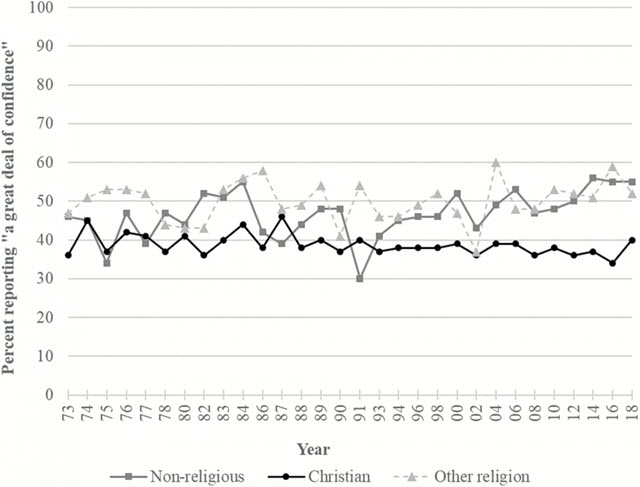 Christians report confidence in scientific leaders in line with the general American public, while a much larger fraction of members of other religions or no religion report a great deal of confidence in the institution.Credit: Image courtesy of Dominique Brossard

"Our study focused on aggregate trends, but among the few subgroups we assessed, we didn't see sharp declines in confidence in scientists," says Krause. "Instead, we saw long-standing gaps or new gaps emerging because one group's confidence has been increasing relative to others."

The researchers also found high levels of trust in scientists on specific issues, like the environment, and in other countries, including the United Kingdom and Germany.

"Trust in science is about more than politics," she says. "There's no war on science among the American public."