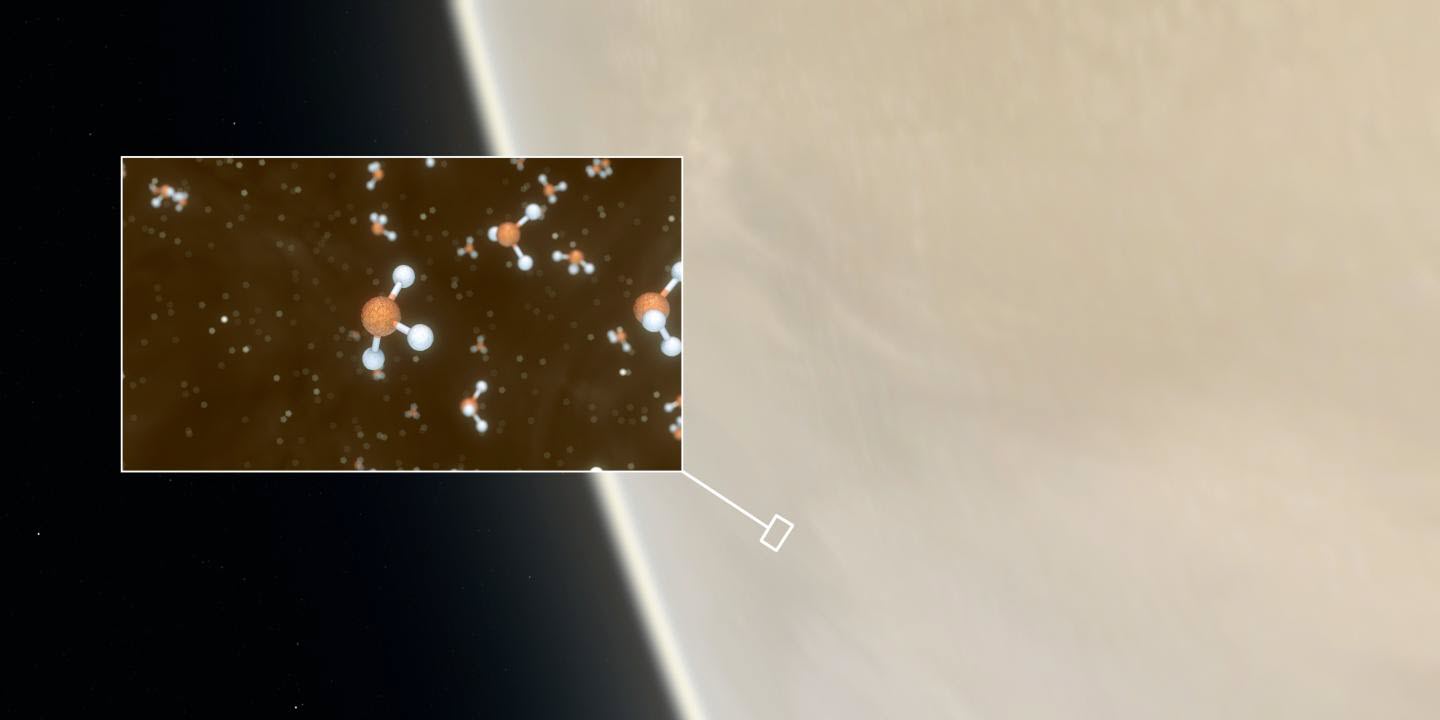 An international team of astronomers, led by professor Jane Greaves of Cardiff University, recently announced the discovery of a rare molecule—phosphine—in the clouds of Venus. On Earth, this gas is only made industrially, or by microbes that thrive in oxygen-free environments.

Astronomers have speculated for decades that high clouds on Venus could offer a home for microbes—floating free of the scorching surface, but still needing to tolerate very high acidity. The detection of phosphine molecules, which consist of hydrogen and phosphorus, could point to this extraterrestrial 'aerial' life. The new discovery is described in a paper in Nature Astronomy.

The team first used the James Clerk Maxwell Telescope (JCMT) in Hawaii to detect the phosphine, and were then awarded time to follow up their discovery with 45 telescopes of the Atacama Large Millimeter/submillimeter Array (ALMA) in Chile. Both facilities observed Venus at a wavelength of about 1 millimeter, much longer than the human eye can see—only telescopes at high altitude can detect this wavelength effectively.

"This was an experiment made out of pure curiosity, really—taking advantage of JCMT's powerful technology, and thinking about future instruments," Greaves says. "I thought we'd just be able to rule out extreme scenarios, like the clouds being stuffed full of organisms. When we got the first hints of phosphine in Venus' spectrum, it was a shock!"

Naturally cautious about the initial findings, Greaves and her team were delighted to get three hours of time with the more sensitive ALMA observatory. Bad weather added a frustrating delay, but after six months of data processing, the discovery was confirmed.

"To our great relief, the conditions were good at ALMA for follow-up observations while Venus was at a suitable angle to Earth," adds team member Dr. Anita Richards of the UK ALMA Regional Centre and the University of Manchester. "Processing the data was tricky, though, as ALMA isn't usually looking for very subtle effects in very bright objects like Venus."

Greaves adds: "In the end, we found that both observatories had seen the same thing—faint absorption at the right wavelength to be phosphine gas, where the molecules are backlit by the warmer clouds below."

Professor Hideo Sagawa of Kyoto Sangyo University then used his models for the Venusian atmosphere to interpret the data, finding that phosphine is present but scarce—only about 20 molecules in every billion.

The astronomers then ran calculations to see if the phosphine could come from natural processes on Venus. They caution that some information is lacking—in fact, the only other study of phosphorus on Venus came from one lander experiment, carried out by the Soviet Vega 2 mission in 1985.

Massachusetts Institute of Technology scientist Dr. William Bains led the work on assessing natural ways to make phosphine. Some ideas included sunlight, minerals blown upwards from the surface, volcanoes, or lightning, but none of these could make anywhere near enough of it. Natural sources were found to make at most one ten thousandth of the amount of phosphine that the telescopes saw.

To create the observed quantity of phosphine on Venus, terrestrial organisms would only need to work at about 10 percent of their maximum productivity, according to calculations by Dr. Paul Rimmer of Cambridge University. Any microbes on Venus will likely be very different to their Earth cousins though, to survive in hyper-acidic conditions.

Earth bacteria can absorb phosphate minerals, add hydrogen, and ultimately expel phosphine gas. It costs them energy to do this, so why they do it is not clear. The phosphine could be just a waste product, but other scientists have suggested purposes like warding off rival bacteria.

Another MIT team member, Dr. Clara Sousa Silva, was also thinking about searching for phosphine as a 'biosignature' gas of non-oxygen-using life on planets around other stars, because normal chemistry makes so little of it. 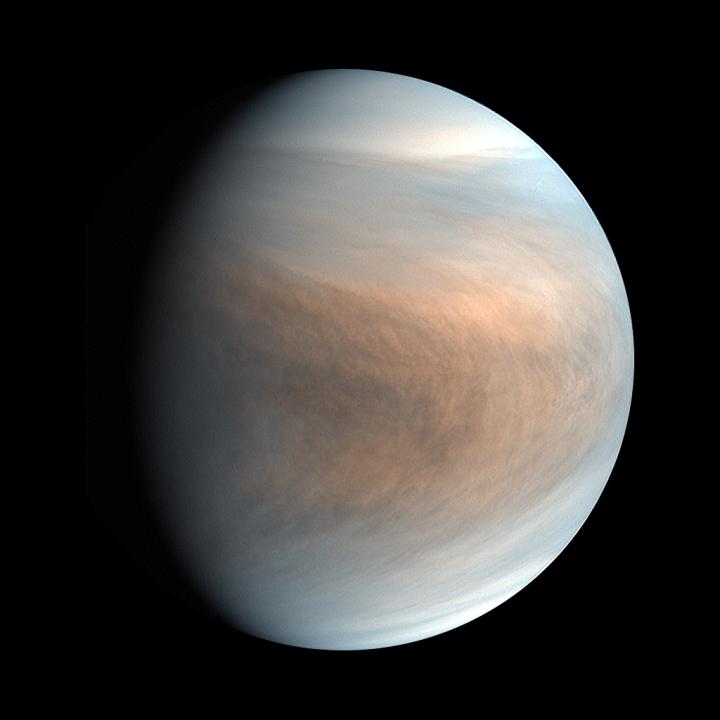 "Finding phosphine on Venus was an unexpected bonus!," she comments. "The discovery raises many questions, such as how any organisms could survive. On Earth, some microbes can cope with up to about five percent of acid in their environment—but the clouds of Venus are almost entirely made of acid."

Other possible biosignatures in the Solar System may exist, like methane on Mars and water venting from the icy moons Europa and Enceladus. On Venus, it has been suggested that dark streaks where ultraviolet light is absorbed could come from colonies of microbes. The Akatsuki spacecraft, launched by the Japanese space agency JAXA, is currently mapping these dark streaks to understand more about this "unknown ultraviolet absorber."

The team believes their discovery is significant because they can rule out many alternative ways to make phosphine, but they acknowledge that confirming the presence of "life" needs a lot more work. Although the high clouds of Venus have temperatures up to a pleasant 30°C, they are incredibly acidic—around 90 percent sulphuric acid—posing major issues for microbes to survive there. Professor Sara Seager and Dr. Janusz Petkowski, also both at MIT, are investigating how microbes could shield themselves inside droplets.

The team are now eagerly awaiting more telescope time, for example to establish whether the phosphine is in a relatively temperate part of the clouds, and to look for other gases associated with life. New space missions could also travel to our neighboring planet, and sample the clouds in situ to further search for signs of life.

Professor Emma Bunce, president of the Royal Astronomical Society, congratulated the team on their work:

"A key question in science is whether life exists beyond Earth, and the discovery by professor Jane Greaves and her team is a key step forward in that quest. I'm particularly delighted to see UK scientists leading such an important breakthrough—something that makes a strong case for a return space mission to Venus."

"Venus has for decades captured the imagination of scientists and astronomers across the world. This discovery is immensely exciting, helping us increase our understanding of the universe and even whether there could be life on Venus. I am incredibly proud that this fascinating detection was led by some of the UK's leading scientists and engineers using state-of-the-art facilities built on our own soil."