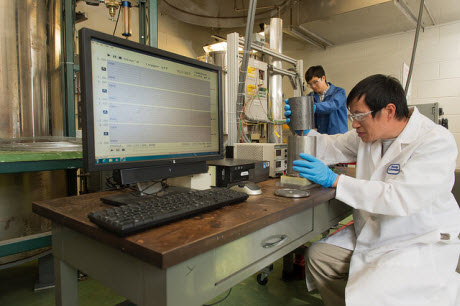 Current CSP plants use an array of mirrors or lenses to concentrate sunlight to heat a fluid that creates steam to then power electricity-producing turbines. Thermal storage systems are able to store solar energy so that the turbines can continue to run at night or on cloudy days when the sun isn’t shining. This dramatically improves plant capacity.

To maximize plant efficiency, however, it is essential that thermal storage systems operate at temperatures more than 200°C higher than current systems. For this purpose, high-temperature phase-change heat storage materials are being investigated that store heat as they melt, a property that is associated with the latent heat of the material. When the melted phase change material freezes, heat is released and can be recovered. Phase-change materials use much less material than current systems, lowering the cost of the thermal storage. Use of such materials, however, has been hindered by the fact that they conduct heat very poorly.

A team of researchers at Argonne has developed a composite heat storage material that receives and releases heat very rapidly. This material consists of high-conductivity foams that have been infiltrated with a high-temperature phase-changing material. The awarded scale-up and demonstration project will yield an energy storage system that has three times the capacity of the current lab-scale system.