College campuses are at risk of becoming COVID-19 superspreaders for their entire county, according to a new vast study which shows the striking danger of the first two weeks of school in particular.

Looking at 30 campuses across the nation with the highest amount of reported cases, experts saw that over half of the institutions had spikes—at their peak—which were well above 1,000 coronavirus cases per 100,000 people per week within the first two weeks of class.

In some colleges, one in five students had been infected with the virus by the end of the fall term. Four institutions had over 5,000 cases.

In 17 of the campuses monitored, a new computer model developed by scientists at Stanford University shows outbreaks translated directly into peaks of infection within their home counties.

Out today, the team's research—published in the peer-reviewed journal Computer Methods in Biomechanics and Biomedical Engineering—crucially shows, however, that tight outbreak management, for example the immediate transition from in person to all online learning, can reduce the peaks within about two weeks.

Lead author Hannah Lu, from Stanford's Energy Resources Engineering program, says the incidence levels of 1,000 cases per 100,000 people per week—when compared to the first and second waves of the pandemic with peak incidences of 70 to 150—means colleges are at real risk of developing an extreme incidence of COVID-19.

"Policy makers often use an incidence of 50 COVID-19 cases per 100,000 people per week as a threshold for high risk counties, states, or countries. All 30 institutions in our study exceeded this value, three even by two orders of that magnitude," she states.

"The number of students who had become infected just throughout the fall is more than twice of the national average since the beginning of the outbreak of 5.3 percent, with 17.3 million reported cases at a population of 328.2 million.

"At the University of Notre Dame, for instance, all 12,607 students were tested before the beginning of class and only nine had tested positive. Less than two weeks into the term, the seven-day incidence was 3083, with a reproduction number R0 of 3.29.

"However," she adds, "with around 90 reported deaths nationwide, mainly college employees and not students, the campus-related death rate of 0.02 percent remains well below the average death rate of COVID-19."

Related Article: Identifying What Could Make Someone a Virus Super-Spreader

Members of the research team used advanced modelling, which assesses the real-time epidemiology of the COVID-19 outbreak using an SEIR (susceptible, exposed, infectious, and recovered) model to map how the disease spread across the campuses.

They drew COVID-19 case reports from 30 publicly available college dashboards across the United States throughout the fall of 2020. These institutions were either teaching in person, online or a hybrid of both. They selected colleges for which case numbers are reported on a daily basis and the total cumulative case number exceeded 100.

During this time window, the nationwide number of new cases had dropped below 50,000 per day.

A limitation of this study is that the true on-campus student population was often unreported and had to be approximated by the total fall quarter enrollment. "This likely underestimates of the real maximum incidence and the fraction of on-campus students that have been affected by the virus," the authors state. 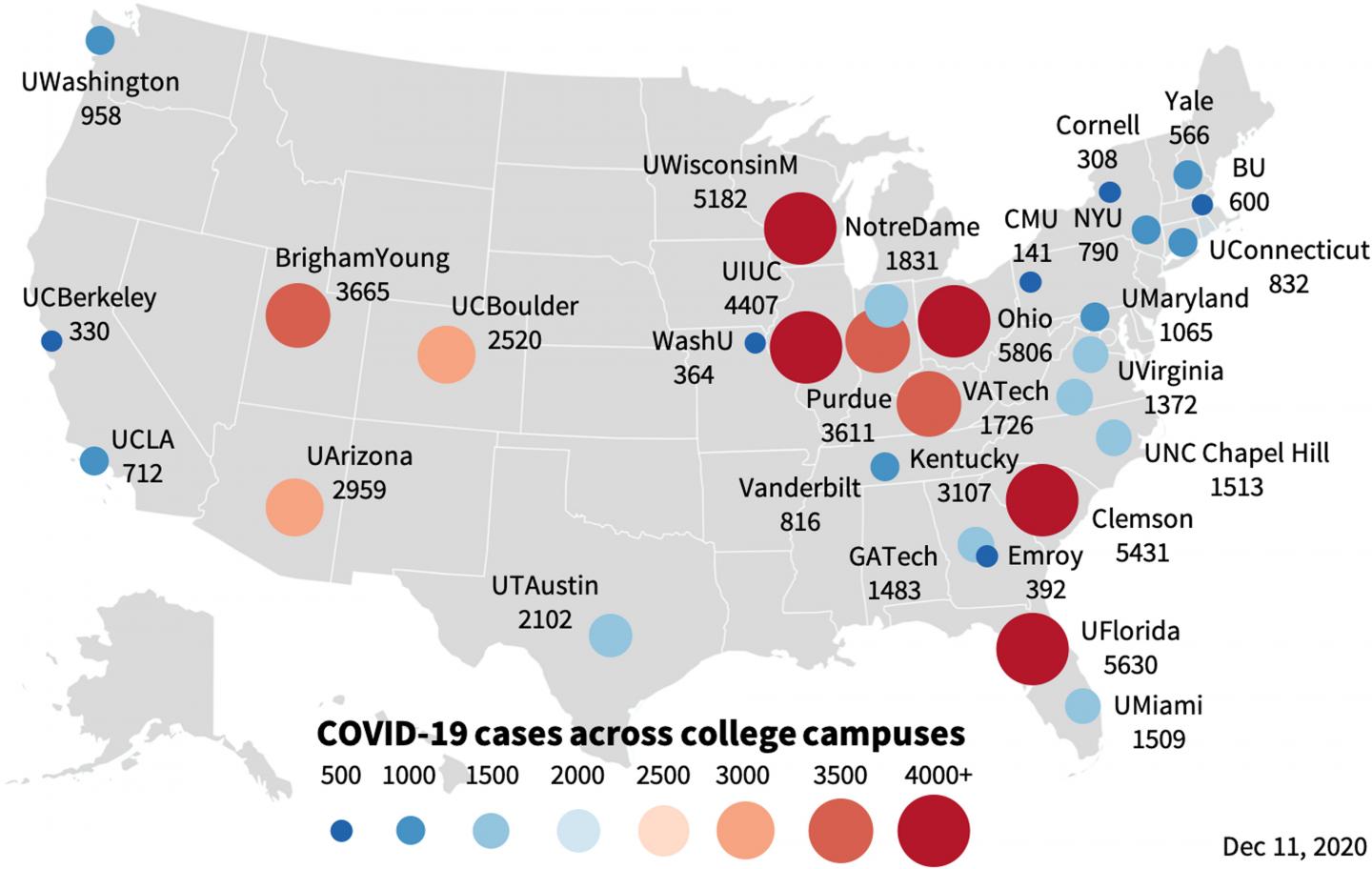 COVID-19 cases across 30 college campuses. Reported cases for 10 high-case-number, public, and private institutions across the United States since the outbreak of the pandemic.
"Are college campuses superspreaders? A data-driven modeling study." Lu et al, Computer Methods in Biomechanics and Biomedical Engineering

Senior author, Ellen Kuhl, adds: "Strikingly, these local campus outbreaks rapidly spread across the entire county and triggered a peak in new infections in neighboring communities in more than half of the cases.

"It is becoming increasingly clear that these initial college outbreaks are unrelated to the national outbreak dynamics. Instead, they are independent local events driven by campus reopening and inviting students back to campus.

"Our results confirm the widespread fear in early fall that colleges could become the new hot spots of COVID-19 transmission. But, at the same time, college administrators should be applauded for their rapid responses to successfully manage local outbreaks."

"The majority of colleges and universities were able to rapidly manage their outbreaks and suppress campus-wide infections, while the neighboring communities were less successful in controlling the spread of the virus. As a result, for most institutions, the outbreak dynamics remained manageable throughout the entire fall of 2020 with narrow spikes of less than 300 cases per day," Lu states.

The team believes that this methodology, in combination with continuing online learning, is the best way to prevent college sites from becoming the major hub of the disease.

"Our study suggests that tight test-trace-isolate strategies, flexible transition to online instruction, and-most importantly-compliance with local regulations will be critical to ensure a safe campus reopening after the winter break," she added.

Professor Kuhl concludes: "We anticipate that the most important aspect upon campus reopening within the coming weeks will be the human factor. Unfortunately, the fall term has shown that the best of all strategies can become meaningless if people do not follow the recommendations."

- This press release was originally published on the Taylor & Francis Group website. It has been edited for style