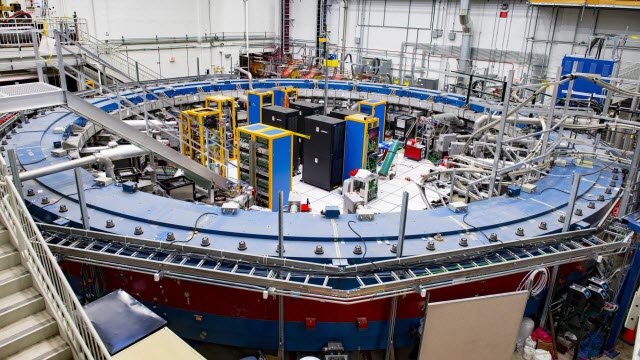 The Muon g-2 experiment at Fermilab, which has been six years in the making, is officially up and running after reaching its final construction milestone. The U.S. Department of Energy on Jan. 16 granted the last of five approval stages to the project, Critical Decision 4 (CD-4), formally allowing its transition into operations.

“We laid down the plans for Muon g-2 early on and have stuck to that through four years of construction,” said Fermilab’s Chris Polly, the experiment’s co-spokesperson and former project manager. “We’ve come out on schedule and under budget, which sets a good precedent for all the other projects.”

The experiment will send particles called muons—heavier cousins of the electron—around a 50-foot-wide muon storage ring that was relocated from Brookhaven National Laboratory in New York state in 2013. The uniform magnetic field inside the ring exerts a torque that affects the muons’ own spins, causing them to wobble. In the early 2000s, scientists at Brookhaven found the value of this wobble, called magnetic precession, to be different from the “g-2” value predicted by theory.

At Fermilab, the Muon g-2 experiment aims to confirm or refute this intriguing discrepancy with theory by repeating the measurements with a fourfold improvement in accuracy, up to 140 parts per billion. That’s like measuring the length of a football field with a margin of error that is only one-tenth the thickness of a human hair. If the experimental deviation from theory turns out to be real, it would mean that undiscovered forces or particles beyond the Standard Model—the theoretical framework that describes how the universe works—are appearing and disappearing from the vacuum to disturb the muons’ magnetic moment.

“Well, if we find the measurement is consistent with theory, it will allow us to narrow our search for new physics, since it will rule out some current models that would no longer be viable,” Polly said.

For example, Polly added, there are theories positing the existence of supersymmetric particles—superheavy partners to those in the Standard Model—and new categories of particles that could be the constituents of the mysterious dark matter, which makes up 80 percent of the universe’s mass. Some of these theories would no longer be valid.

“That’s the value of a null result,” Polly said. “It helps us make sure that the theories that we would use to try to understand these other bigger questions are consistent.”

All that’s left now is to finish fine-tuning the instruments so the experiment can start its several-year run of data collection.

“For most of the team, this was the first project we’ve worked on,” said Fermilab physicist Mary Convery, who served as the experiment’s deputy project manager. “To see it through from design to construction and now to operations has been very rewarding.”

Muon g-2 operations got a head start in June 2017, when the team fired up the particle beam to start calibrating the detectors and tweaking components that required additional work.

“Since the accelerator turned back on in November, we have been commissioning the beamlines, the storage ring and the rest of the experiment,” said University of Washington physicist David Hertzog, Muon g-2 co-spokesperson.

As early as next month, Muon g-2 will be ready to start collecting physics-quality data at Fermilab and explore the nature of the previously measured g-2 discrepancy.

“We’ve set ourselves the goal of collecting three times the amount of data that they had in Brookhaven’s three-year run during this first spring season,” Hertzog said. “But this is just the very beginning: The experiment will run with higher intensity next year. The ultimate goal is to collect 21 times the Brookhaven statistics.”

Fermilab is America’s premier national laboratory for particle physics and accelerator research. A U.S. Department of Energy Office of Science laboratory, Fermilab is located near Chicago, Illinois, and operated under contract by the Fermi Research Alliance LLC, a joint partnership between the University of Chicago and the Universities Research Association Inc. Visit Fermilab’s website at www.fnal.gov and follow us on Twitter at @Fermilab.

The DOE Office of Science is the single largest supporter of basic research in the physical sciences in the United States, and is working to address some of the most pressing challenges of our time. For more information, please visit http://science.energy.gov.