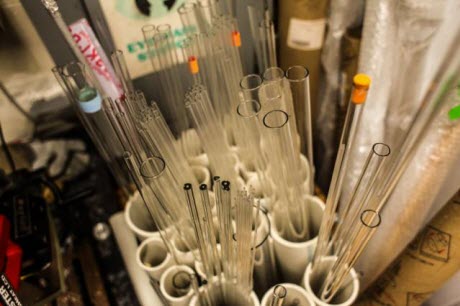 Different kinds of low-cost silicon dioxide tubes and rods sit in the lab. Researchers experimented by filling these tubes with a variety of metals to make a preform. When they tried aluminum, they found unexpected results.Jose-Luis Olivares/MITScientists have known how to draw thin fibers from bulk materials for decades. But a new approach to that old method, developed by researchers at MIT, could lead to a whole new way of making high-quality fiber-based electronic devices.

The idea grew out of a long-term research effort to develop multifunctional fibers that incorporate different materials into a single long functional strand. Until now, those long strands could only be created by arranging the materials in a large block or cylinder called a preform, which is then heated and stretched to create a thin fiber that is drastically smaller in diameter, but retains the same composition.

Now, for the first time, fibers created through this method can have a composition that’s completely different from that of the starting materials — an advance that senior author Yoel Fink refers to as a kind of “alchemy,” turning inexpensive and abundant materials into high-value ones. The new findings are described in a paper in the journal Nature Communications co-authored by graduate student Chong Hou, and six others at MIT and in Singapore.

The initial discovery was a complete surprise: In experiments designed to test the possibility of incorporating metal wires inside fibers, Hou tried a variety of metals, including silver, copper, and aluminum — and in the latter case, the result was not what they expected.

“When I looked at the fiber, instead of a shiny metallic core, I observed a dark substance; I really didn’t know what happened,” says Hou, who is the lead author of the paper. Upon analysis, the researchers found that the core had turned to silicon — in fact, very pure, crystalline silicon.

“My initial reaction might have been to discard the sample altogether,” Fink says, after seeing that the experiment “failed” to produce the expected result. But instead, Hou  began to examine the specimen and apply rigorous analysis, soon realizing that the mundane result he expected was replaced by a surprising one — which is how this discovery came about.

It turned out that the chemical reaction in the fiber was a well-known one: At the high temperatures used for drawing the fiber, about 2,200 degrees Celsius, the pure aluminum core reacted with the silica, a form of silicon oxide. The reaction left behind pure silicon, concentrated in the core of the fiber, and aluminum oxide, which deposited a very thin layer of aluminum between the core and the silica cladding.

Now, Hou says, “We can use this to get electrical devices, like solar cells or transistors, or any silicon-based semiconductor devices, that could be built inside the fiber.” Many teams have tried to create such devices within fibers, he says, but so far all of the methods tried have required starting with expensive, high-purity silicon.

“Now we can use an inexpensive metal,” Hou says. “It gives us a new approach to generating a silicon-core fiber.”

Fink, who is a professor of materials science and electrical engineering and head of MIT’s Research Laboratory of Electronics, says this represents “the first time that a fiber is drawn which is radically different from its preform. … It opens new opportunities in fiber materials and fiber devices through value-added processing.”

“We want to use this technique to generate not only silicon inside, but also other materials,” Hou says. In addition, the team is working to produce specific structures, such as an electrical junction inside the material as it is drawn. “We could put other metals in there, like gold or copper, and make a real electrical circuit,” he says.

Fink adds that this is “a new way of thinking about fibers, and it could be a way of getting fibers to do a lot more than they ever have.” As mobile devices continue to grow into an ever-larger segment of the electronics business, for example, this technology could open up new possibilities for electronics — including solar cells and microchips — to be incorporated into fibers and woven into clothing or accessories.

“Optical fibers are central to modern communications and information technologies, yet the materials and processes employed in their realization have changed little in 40 years,” says John Ballato, director of the Center for Optical Materials Science and Engineering Technologies at Clemson University in South Carolina, who was not involved in this research. He says, “Of particular importance here is that the starting and ending core composition are entirely different. Previous work focused on chemical reactions and interactions between core and clad phases, but never such a wholesale materials transformation.”

Henry Du, a professor of chemical engineering and materials science at Stevens Institute of Technology in Hoboken, NJ, who also was not associated with this research, says “This work is simply beautiful.” He adds that “this new strategy will enable the fabrication of new classes of functional fibers that would otherwise be difficult, if not impossible, using the traditional approach.”

Besides Hou, the work included Xiaoting Jia, Xin Zhao, and John Joannopoulos at MIT; Lei Wei at the Nanyang Technical University in Singapore; and Swee-Ching Tan at the National University of Singapore. The work was supported by the National Science Foundation and by the U.S. Army Research Laboratory and the U.S. Army Research Office through MIT’s Institute for Soldier Nanotechnologies.