No one has yet found the first stars.

They're hypothesized to have formed about 100 million years after the Big Bang out of universal darkness from the primordial gases of hydrogen, helium, and trace light metals. These gases cooled, collapsed, and ignited into stars up to 1,000 times more massive than our sun. The bigger the star, the faster they burn out. The first stars probably only lived a few million years, a drop in the bucket of the age of the universe, at about 13.8 billion years. They're unlikely to ever be observed, lost to the mists of time.

As the metal-free first stars collapsed and exploded into supernovae, they forged heavier elements such as carbon that seeded the next generation of stars. One type of these second stars is called a carbon-enhanced metal-poor star. They're like fossils to astrophysicists. Their composition reflects the nucleosynthesis, or fusion, of heavier elements from the first stars.

"We can get results from indirect measurements to get the mass distribution of metal-free stars from the elemental abundances of metal-poor stars," said Gen Chiaki, a postdoctoral researcher in the Center for Relativistic Astrophysics, School of Physics, Georgia Tech.

Chiaki is the lead author of a study published in the September 2020 issue of the Monthly Notices of the Royal Astronomical Society. The study modeled for the first time faint supernovae of metal-free first stars, which yielded carbon-enhanced abundance patterns through the mixing and fallback of the ejected bits. 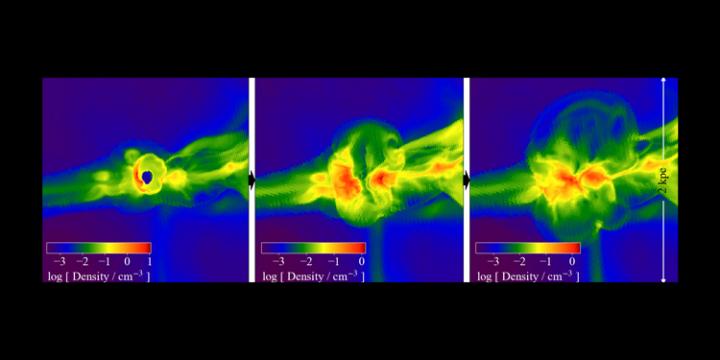 "Galactic archaeology" refers to the study of second generation stars to learn about the physical characteristics of the first stars, which disappeared only tens of millions of years after the Big Bang. A computational physics study modeled for the first time faint supernovae of metal-free first stars, yielding carbon-enhanced abundance patterns for star formation. Slice of density, temperature, and carbon abundance for a 13 solar mass progenitor model at times (left-right) 0.41, 15.22, and 29.16 million years after the supernovae explosion in a box with a side 2 kpc.
Chiaki, et al

Their simulations also showed the carbonaceous grains seeding the fragmentation of the gas cloud produced, leading to formation of low-mass 'giga-metal-poor' stars that can survive to the present day and possibly be found in future observations.

"We find that these stars have very low iron content compared to the observed carbon-enhanced stars with billionths of the solar abundance of iron. However, we can see the fragmentation of the clouds of gas. This indicates that the low mass stars form in a low iron abundance regime. Such stars have never been observed yet. Our study gives us theoretical insight of the formation of first stars," Chiaki said.

The investigations of Wise and Chiaki are a part of a field called 'galactic archaeology.' They liken it to searching for artifacts underground that tell about the character of societies long gone. To astrophysicists, the character of long-gone stars can be revealed from their fossilized remains.

"We can't see the very first generations of stars," said study co-author John Wise, an associate professor also at the Center for Relativistic Astrophysics, School of Physics, Georgia Tech. "Therefore, it's important to actually look at these living fossils from the early universe, because they have the fingerprints of the first stars all over them through the chemicals that were produced in the supernova from the first stars."

"That's where our simulations come into play to see this happening. After you run the simulation, you can watch a short movie of it to see where the metals come from and how the first stars and their supernovae actually affect these fossils that live until the present day," Wise said.

The scientists first modeled the formation of their first star, called a Population III or Pop III star, and ran three different simulations that corresponded to its mass at 13.5, 50, and 80 solar masses. The simulations solved for the radiative transfer during its main sequence and then after it dies and goes supernova. The last step was to evolve the collapse of the cloud of molecules spewed out by the supernova that involved a chemical network of 100 reactions and 50 species such as carbon monoxide and water.

The majority of the simulations ran on the Georgia Tech PACE cluster. They were also awarded computer allocations by the National Science Foundation (NSF)-funded Extreme Science and Engineering Discovery Environment (XSEDE). Stampede2 at the Texas Advanced Computing Center (TACC) and Comet at the San Diego Supercomputer Center (SDSC) ran some of the main sequence radiative transfer simulations through XSEDE allocations.

"The XSEDE systems Comet at SDSC and Stampede2 at TACC are very fast and have a large storage system. They were very suitable to conduct our huge numerical simulations," Chiaki said.

"Because Stampede2 is just so large, even though it has to accommodate thousands of researchers, it's still an invaluable resource for us," Wise said. "We can't just run our simulations on local machines at Georgia Tech."

Chiaki said he was also happy with the fast queues on Comet at SDSC. "On Comet, I could immediately run the simulations just after I submitted the job," he said.

Wise has been using XSEDE system allocations for over a decade, starting when he was a postdoc. "I couldn't have done my research without XSEDE."

XSEDE also provided expertise for the researchers to take full advantage of their supercomputer allocations through the Extended Collaborative Support Services (ECSS) program. Wise recalled using ECSS several years ago to improve the performance of the Enzo adaptive mesh refinement simulation code he still uses to solve the radiative transfer of stellar radiation and supernovae.

"Through ECSS, I worked with Lars Koesterke at TACC, and I found out that he used to work in astrophysics. He worked with me to improve the performance by about 50 percent of the radiation transport solver. He helped me profile the code to pinpoint which loops were taking the most time, and how to speed it up by reordering some loops. I don't think I would have identified that change without his help," Wise said.

Wise has also been awarded time on TACC's NSF-funded Frontera system, the fastest academic supercomputer in the world. "We haven't gotten to full steam yet on Frontera. But we're looking forward to using it, because that's even a larger, more capable resource."

Wise added: "We're all working on the next generation of Enzo. We call it Enzo-E, E for exascale. This is a total re-write of Enzo by James Bordner, a computer scientist at the San Diego Supercomputer Center. And it scales almost perfectly to 256,000 cores so far. That was run on NSF's Blue Waters. I think he scaled it to the same amount on Frontera, but Frontera is bigger, so I want to see how far it can go."

The downside, he said, is that since the code is new, it doesn't have all the physics they need yet. "We're about two-thirds of the way there," Wise said.

He said that he's also hoping to get access to the new Expanse system at SDSC, which will supersede Comet after it retires in the next year or so. "Expanse has over double the compute cores per node than any other XSEDE resource, which will hopefully speed up our simulations by reducing the communication time between cores," Wise said.

According to Chiaki, the next steps in the research are to branch out beyond the carbon features of ancient stars. "We want to enlarge our interest to the other types of stars and the general elements with larger simulations," he said.

Said Chiaki: "The aim of this study is to know the origin of elements, such as carbon, oxygen, and calcium. These elements are concentrated through the repetitive matter cycles between the interstellar medium and stars. Our bodies and our planet are made of carbon and oxygen, nitrogen, and calcium. Our study is very important to help understand the origin of these elements that we human beings are made of."