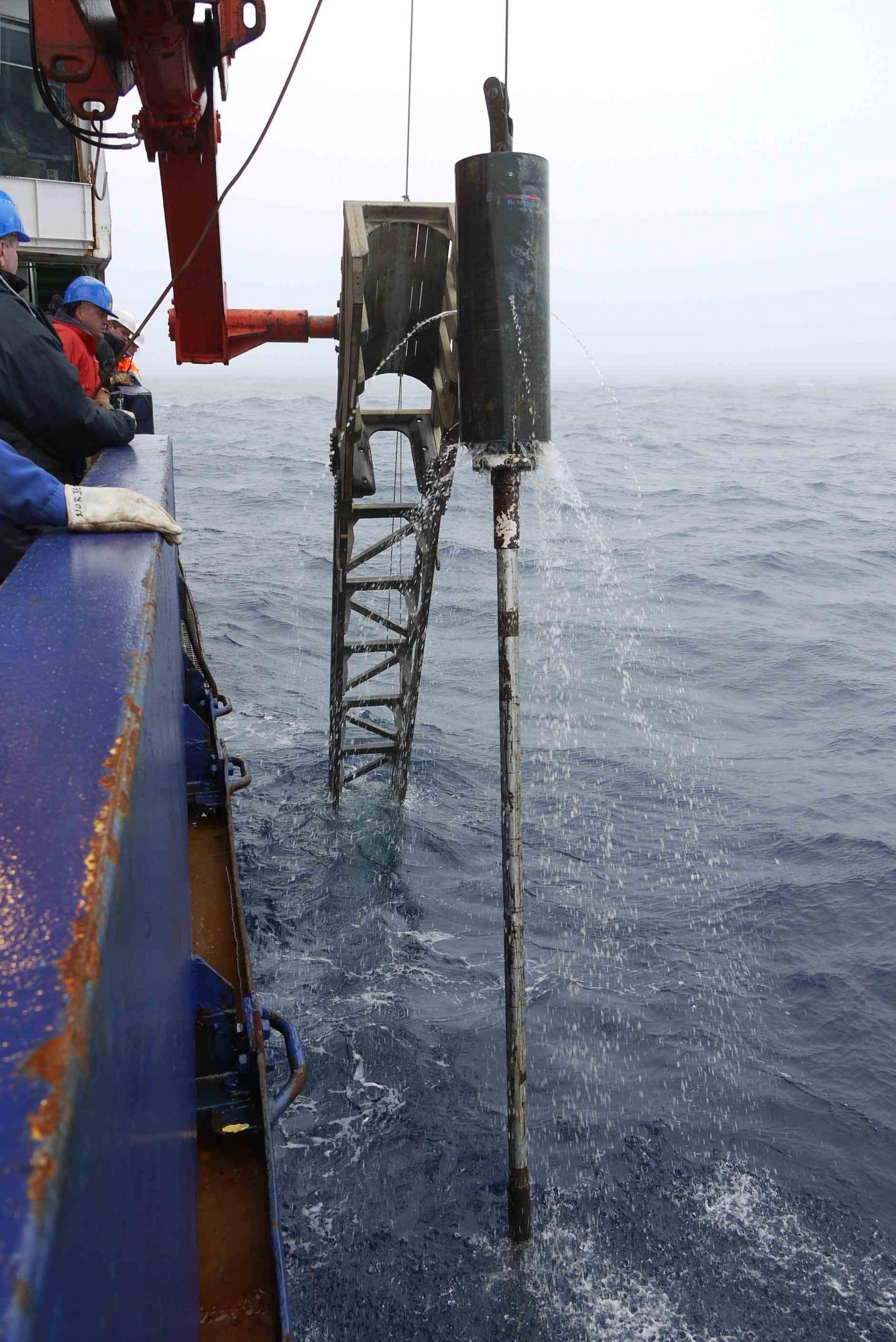 18 sediment cores from the seabed were brought on board the research vessel Polarstern by means of plungers and gravity sounders.
Katharina Pahnke / University of Oldenburg

During the last Ice Age about 20,000 years ago, iron-containing dust acted as a fertilizer for marine phytoplankton in the South Pacific, promoting CO2 sequestration and thus the glacial cooling of the Earth. But where did the dust come from? Researchers led by Dr. Torben Struve, geoscientist at the University of Oldenburg, Germany, have investigated this open question of climate history, which is also relevant with respect to current climate change.

Using sediment cores from the seafloor, they found that a large part of the dust deposited in the southern South Pacific at that time had traveled an extremely long way. Up to 80 percent of the dust came from what is now northwest Argentina, from where it was transported almost completely around the globe by the prevailing westerly winds. After a voyage of up to 20,000 kilometers, it contributed significantly to the increased input of iron into the glacial South Pacific. The dust input from Australia, which dominates in the South Pacific today, played only a minor role. The research team has published these new insights into the mechanisms of natural iron input into the Southern Ocean in the journal Nature Communications.

"We have analyzed the chemical fingerprint of the dust and compared it with geological data from several continents. This was laborious work, like a jigsaw puzzle," says Struve, a post-doctoral scientist in the research group "Marine Isotope Geochemistry" at the University's Institute for Chemistry and Biology of the Marine Environment (ICBM). The team included researchers from his group as well as colleagues from the Alfred Wegener Institute - Helmholtz Centre for Polar and Marine Research, Bremerhaven (Germany), and from Columbia University, New York (USA).

The researchers sampled 18 sediment cores from the South Pacific between Antarctica, New Zealand, and Chile, a study area which is roughly the size of Russia. Subsequently, they investigated the chemical composition of the dust contained in the samples. "This dust ultimately stems from rock, which has characteristic properties depending on its place of origin and geologic history so that each source has its own signature," Struve explains.

The researchers focused on trace metals, in particular rare earth elements and specific isotopes, that is variants of different weight, of the elements neodymium, lead, and strontium. This signature is preserved over millions of years and thus provides reliable information about the origin of rock particles even after 20,000 years. 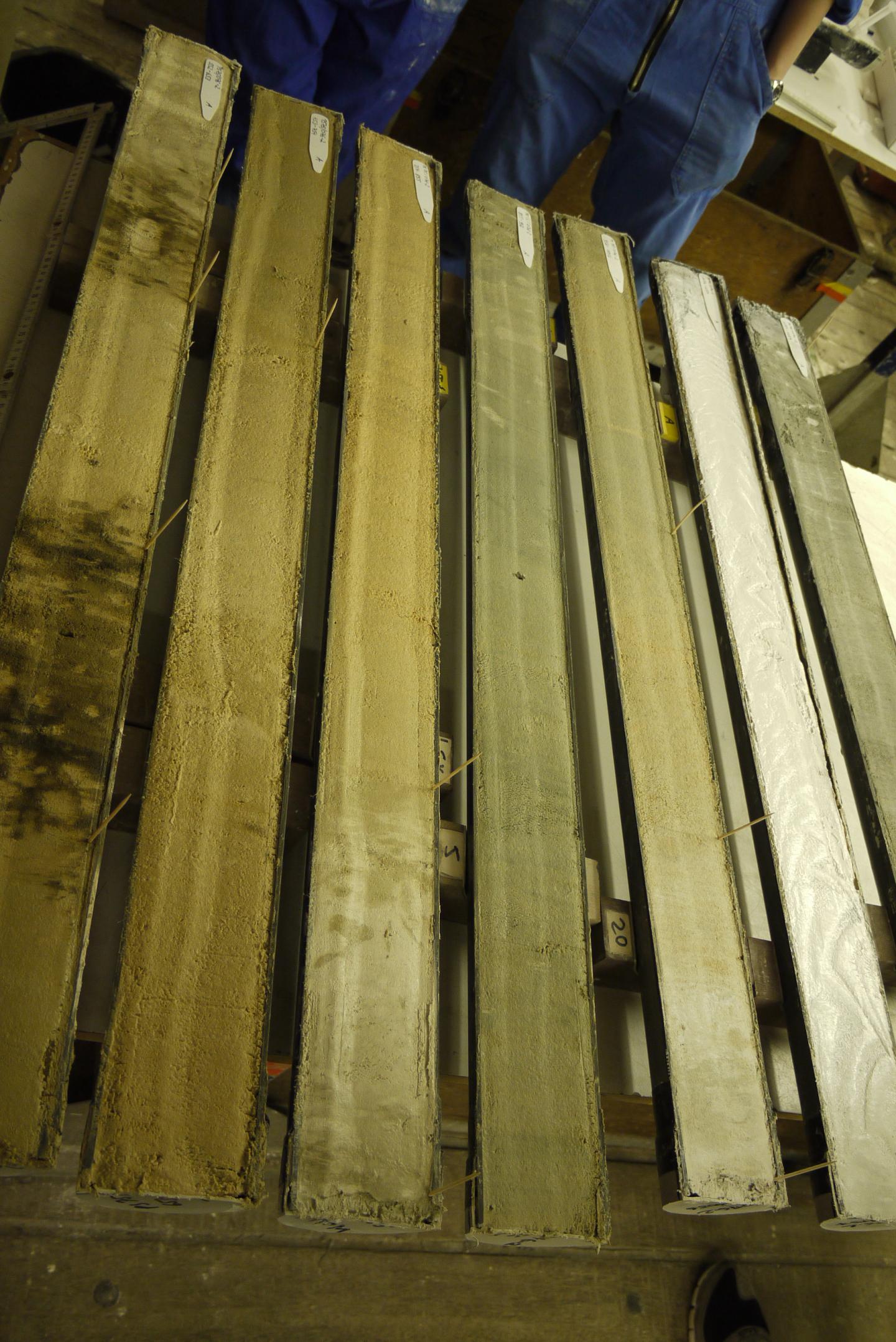 The individual sections of one of the investigated sediment cores. As the latter can be up to 30 meters long, they are usually dissected.
Katharina Pahnke / University of Oldenburg

At that time, the last Ice Age was at its peak. According to the results, westerly winds blew dust particles from the eastern side of the central Andes in South America across the Atlantic and the Indian Ocean. As such, the iron-bearing dust was transported once around the globe before being deposited in the middle latitudes of the South Pacific. Since algae in these waters usually lack iron as a crucial nutrient for growth, iron-containing dust acts as a natural fertilizer until today.

Like all plants, phytoplankton—microscopic algae—absorbs carbon by means of photosynthesis and thus reduces the proportion of carbon dioxide (CO2) in the atmosphere. According to Struve, the greatly increased input of iron-bearing mineral dust into this marine region, primarily from South America, could help to explain "how the Earth could have become so cold at all at that time."

It was already known that the iron input during the last ice age was much higher than during the present warm period. "But we were surprised to find that the sources and transport routes of the dust were completely different from today and also different from what we would have expected."

The research team concludes that the unusually high dust emissions from South America must have made a significant contribution to the reduction of CO2 in the atmosphere of the Ice Age. The input of iron-bearing mineral dust reduced the CO2 level of the atmosphere by up to 40 ppm ("parts per million"). This corresponds to almost half of the natural CO2 variation in the atmosphere over the last 400,000 years amounting to 100 ppm. To put this into perspective, since the beginning of industrialization, anthropogenic emissions have increased the CO2 level from around 280 to around 415 ppm.

Today, no dust from South America can be detected in the study area. "Global warming has changed the winds and environmental conditions in the source regions," Struve says, who continues to study the sediment cores. Together with his colleagues, he wants to find out how the composition of the dust has changed since the peak of the ice age and how this may have contributed to climate change.