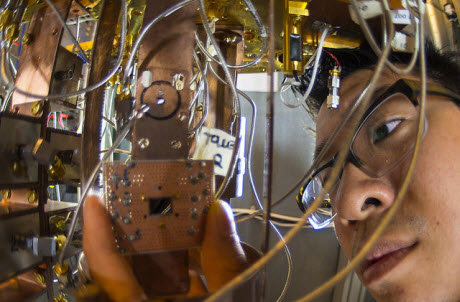 IBM scientists have built a quantum processor that users can access through a first-of-a-kind quantum computing platform delivered via the IBM Cloud onto any desktop or mobile device. IBM believes quantum computing is the future of computing and has the potential to solve certain problems that are impossible to solve on today’s supercomputers.

The cloud-enabled quantum computing platform, called IBM Quantum Experience, will allow users to run algorithms and experiments on IBM’s quantum processor, work with the individual quantum bits (qubits), and explore tutorials and simulations around what might be possible with quantum computing.

The quantum processor is composed of five superconducting qubits and is housed at the IBM T.J. Watson Research Center in New York. The five-qubit processor represents the latest advancement in IBM’s quantum architecture that can scale to larger quantum systems. It is the leading approach towards building a universal quantum computer.

A universal quantum computer can be programmed to perform any computing task and will be exponentially faster than classical computers for a number of important applications for science and business.

A universal quantum computer does not exist today, but IBM envisions medium-sized quantum processors of 50-100 qubits to be possible in the next decade. With a quantum computer built of just 50 qubits, none of today’s TOP500 supercomputers could successfully emulate it, reflecting the tremendous potential of this technology. The community of quantum computer scientists and theorists is working to harness this power, and applications in optimization and chemistry will likely be the first to demonstrate quantum speed-up.

“Quantum computers are very different from today’s computers, not only in what they look like and are made of, but more importantly in what they can do. Quantum computing is becoming a reality and it will extend computation far beyond what is imaginable with today’s computers,” said Arvind Krishna, senior vice president and director, IBM Research. “This moment represents the birth of quantum cloud computing. By giving hands-on access to IBM’s experimental quantum systems, the IBM Quantum Experience will make it easier for researchers and the scientific community to accelerate innovations in the quantum field, and help discover new applications for this technology.”

With Moore’s Law running out of steam, quantum computing will be among the technologies that could usher in a new era of innovation across industries. This leap forward in computing could lead to the discovery of new pharmaceutical drugs and completely safeguard cloud computing systems. It could also unlock new facets of artificial intelligence (which could lead to future, more powerful Watson technologies), develop new materials science to transform industries, and search large volumes of big data. 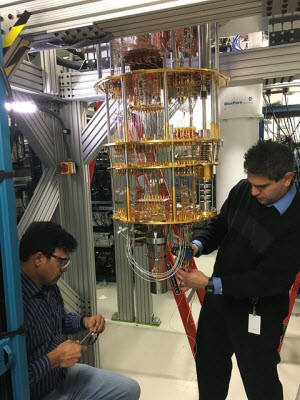 IBM researchers loading up the hardware inside a dilution refrigerator that is home to the five-qubit device.Photo Credit: IBM ResearchQuantum information is very fragile and needs to be protected from any errors that can result from heat and electromagnetic radiation. Signals are sent in and out of a cryogenic dilution refrigerator to measure operations on the quantum processor.

The IBM team has made a number of robust engineering advances both at the device level and in the electronic controls to give IBM Quantum Experience users unprecedented and reliably high-quality performance in this five-qubit processor.

Coupled with software expertise from the IBM Research ecosystem, the team has built a dynamic user interface on the IBM Cloud platform that allows users to easily connect to the quantum hardware via the cloud. The team sees the introduction to the public of this complete quantum computing framework as just the start of a new user community, which embraces the quantum world and how it works.

In the future, users will have the opportunity to contribute and review their results in the community hosted on the IBM Quantum Experience and IBM scientists will be directly engaged to offer more research and insights on new advances. IBM plans to add more qubits and different processor arrangements to the IBM Quantum Experience over time, so users can expand their experiments and help uncover new applications for the technology.

We live in a world where classical physics defines our experiences and our intuition, and ultimately how we process information. However, nature at the atomic level is governed by a different set of rules known as quantum mechanics. It is beyond the reach of classical computers to solve problems that exist in nature in which quantum mechanics plays a role, for example, understanding how molecules behave.

To overcome this, in 1981, Richard Feynman proposed to build computers based on the laws of quantum mechanics. Over three decades later, IBM is helping to make this a reality. 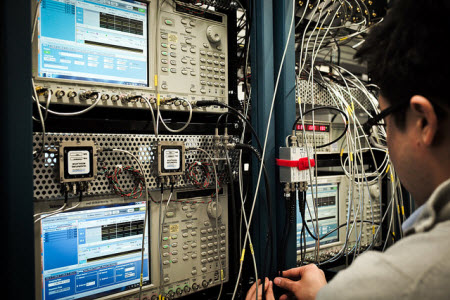 Checking the microwave control hardware that generates pulses sent to the quantum processor.Photo Credit: Carl De Torres for IBM ResearchQuantum computing works fundamentally differently from today’s computers. A classical computer makes use of bits to process information, where each bit represents either a one or a zero. In contrast, a qubit can represent a one, a zero, or both at once, which is known as superposition. This property along with other quantum effects enable quantum computers to perform certain calculations vastly faster than is possible with classical computers.

Most of today’s quantum computing research in academia and industry is focused on building a universal quantum computer. The major challenges include creating qubits of high quality and packaging them together in a scalable way, so they can perform complex calculations in a controllable way.

IBM employs superconducting qubits that are made with superconducting metals on a silicon chip and can be designed and manufactured using standard silicon fabrication techniques. Last year, IBM scientists demonstrated critical breakthroughs to detect quantum errors by combining superconducting qubits in latticed arrangements, and whose quantum circuit design is the only physical architecture that can scale to larger dimensions.

Now, IBM scientists have achieved a further advance by combining five qubits in the lattice architecture, which demonstrates a key operation known as a parity measurement—the basis of many quantum error correction protocols. The road towards universal quantum computing hinges upon the achievement of quantum error correction, and the IBM team has taken another important step down this challenging path.

There has been tremendous progress and interest in the field of quantum of computing in recent years. By giving users access to the IBM Quantum Experience, it will help businesses and organizations begin to understand the technology’s potential, for universities to grow their teaching programs in quantum computing and related subjects, and for students to become aware of promising new career paths. 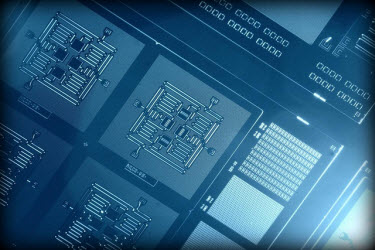 Layout of IBM's four superconducting quantum bit device announced in 2015. Using a square lattice, IBM is able to detect both types of quantum errors for the first time.Photo credit: Credit: IBM Research“It is a beautiful challenge to pursue the path to build the first universal quantum computer, but it requires us to change how we think about the world. Access to early quantum computing prototypes will be key in imagining and developing future applications,” said Dario Gil, vice president of science and solutions, IBM Research. “If you want to understand what a true quantum computer will do for you and how it works, this is the place to do it. You won’t experience it anywhere else.”